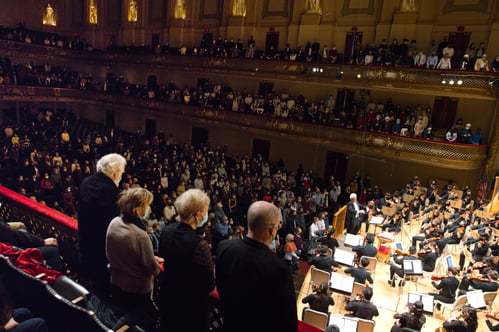 On Sunday, February 27th the Boston Philharmonic Youth Orchestra began their concert with Maestro Benjamin Zander sharing the reactions of an orchestra member to the crisis in Ukraine, followed by everyone in the audience standing in solidarity with Ukraine while the orchestra performed the Ukrainian national anthem...

Watch Maestro Benjamin Zander's remarks and read the text of the letter below:

Ten years ago, I would have said that we’re living in the safest time in history. Today, we are living in the most dangerous. Because of world events, I and many others have had an extraordinarily rough week. I know nobody from Ukraine except for two siblings in my hometown who were adopted from Kyiv as infants. Yet, I weep for the atrocity that the last 48 hours have brought. Wednesday night, I listened to the Ukrainian national anthem and cried uncontrollably. Hasn’t Europe seen enough devastation in the previous century/ Why do so many people insist on killing each other and looking to control the lives of others? Why must evil exist in the world? February 24, 2022, will live in infamy the same way that September 1, 1939, has. A day when a boundless tyrant unleashed an attack not just on a neighboring country but on Western values as a whole. We do not stand for oppression and persecution, and we no longer stand for imperialism. We stand up for the values of the people.

The United States itself has gone through a polarizing time lately. But this is not the time to talk about that. It is the time to put all of that aside and stand up for the people of Ukraine and show our condemnation of a tyrant and an autocrat. And we, as musicians, have one of the most important jobs.

When I made a post on Facebook inviting my friends to our concert, I told them to join us in an afternoon of reflection as much as music. Music is the language best suited for the preservation of history. It is universal, and its meaning only grows over time, keeping it relevant. It is quite a fitting coincidence that every piece for this weekend was composed in the time between Versailles and the outbreak of WW2.

As we stand at yet another historic crossroads, let the music be our guide. Let La Valse serve as a nostalgic reminder of better times and the hope that they will soon return. Let Elgar be a delicate and tender representation of the humanity we all share. And, let Shostakovich, a piece written in opposition to Stalinist Russia, be our statement in solidarity with the people of Ukraine. Like all of my colleagues, I hope that we will not let this enemy destroy Western society. We will not let there be another World War. When our grandchildren ask us about these deeply troubling times, let us tell them that, through public support, we got Russia to back down and prevented a war. Let us tell them that the voices of diplomacy and liberty prevailed. Let us remember this as being the time when freedom once again prevailed. And, of course, let it start with us and our sharing of the music that gives a heartbreaking reminder of the most devastating time of the 20th century as we face the crisis of the 21st century.