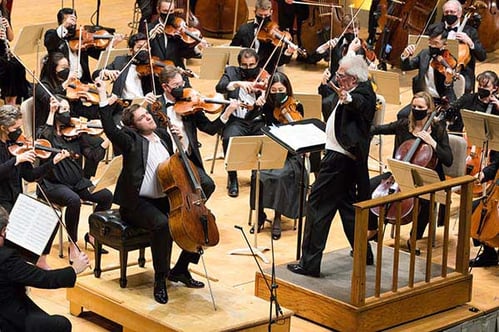 We have just released the Boston Philharmonic Orchestra's February 6 performance of Beethoven's Eroica, Mussorgsky's Khovanshchina Prelude, and Shostakovich's First Cello Concerto with  Andrei Ioniță as a limited-time On Demand video, available through March 21, 2022.

"Zander led the orchestra in a compellingly vigorous performance of Beethoven’s “Eroica” Symphony...For this performance, Zander took a more flexible approach...The push and pull ultimately suited this music’s own combination of dignity and revolution. The outer movements and the scherzo zipped along, at times with crackling intensity, without ever tipping over into breathlessness, while the storied “Marcia funebre” benefited from a genuinely march-like rhythmic clarity." -Jeremy Eichler

"Ioniță effectively conveyed the music’s underlying sense of unsettledness...the BPO provided an accompaniment that discreetly illuminated the music’s motivic organization. In particular, the woodwind and horn sections fired their interjections with immediacy and Zander’s direction of the Moderato’s hymn-like sequences glowed." -Jonathan Bumhofer

"Zander managed both power and wit... Sunday’s performance was headlong, with a sly opening take on the bass line and intense fugue sections...  If the reading wasn’t a revolution, it was in many ways a revelation." -Jeffrey Gantz