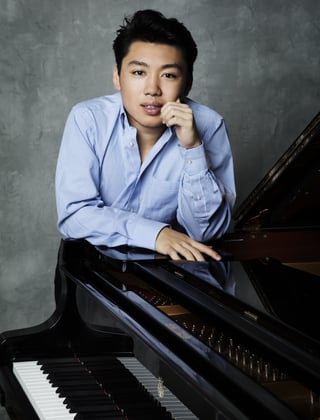 Praised by the Washington Post for combining “staggering technical prowess, a sense of command and depth of expression,” pianist George Li possesses brilliant virtuosity and effortless grace far beyond his years.

He captured the Silver Medal at the 2015 International Tchaikovsky Competition and was the recipient of the 2016 Avery Fisher Career Grant.

George will be performing Tchaikovsky's Piano Concerto No. 1 with the Boston Philarmonic Youth Orchestra on November 26th in Symphony Hall.

George has a long history with Maestro Zander, performing with him on tour, including Beethoven Symphony No. 4 at the Musikverein in Vienna and the Schumann Piano Concerto with the BPYO on tour in Holland. He has also performed several times with the Boston Philharmonic.

He gave his first public performance at Boston’s Steinway Hall at the age of ten and in 2011, performed for President Obama at the White House in an evening honoring German Chancellor Angela Merkel. Among George’s many accolades, he was the First Prize winner of the 2010 Young Concert Artists International Auditions, a recipient of the 2012 Gilmore Young Artist Award, and the second prize winner at the 25th Annual Internation Tchaikovsky Competition (where he performed the composer's Piano Concerto #1).

Here's a sneak peek of George playing the This concert is produced in collaboration with Music for Food, a 501(c)3 organization dedicated to fighting food insecurity in our community.