“I look upon the invention of the metronome as a welcome means of assuring the performance of my compositions everywhere in the tempi conceived by me, which to my regret have so often been misunderstood.”

It will surely come as a surprise to most listeners that a work as familiar as Beethoven’s Fifth Symphony has rarely received a performance that realizes Beethoven’s stated wishes as to how the music should be played, and that this tradition of ignoring the composer’s intentions began in Beethoven’s own time!

It seems that from the very beginning conductors chose to disregard or simply didn’t look at the metronome marks Beethoven left for his symphonies. In doing so they radically altered the “meaning” of the music and established a tradition of performance that is far removed from what Beethoven seems to have intended.

At these concerts the Boston Philharmonic will perform the symphony according to Beethoven’s marked tempi. It will come as a shock to many who assumed they knew the world’s most popular piece of symphonic music.

How did this situation arise? Is there a right and a wrong way of performing this music? Or is its interpretation purely a subjective matter?

Let’s take the opening of the Fifth Symphony – certainly the most famous four notes of music ever penned. If we hear it performed as slowly as it was by such great conductors as Furtwängler, Stokowski, and Klemperer, the music speaks with majesty, force, power, “Fate knocking on the door.” If, on the other hand we hear it at the tempo indicated both by Beethoven’s Italian direction Allegro con brio and by his metronome marking 108, it seems driving, violent, impetuous, headlong, as though a gauntlet were being thrown down in defiance. But which is the “true” version?

Clearly, when Beethoven was composing that opening he must have had some particular “meaning” or sound in mind. He cannot possibly have heard it both at the slower tempo and at the faster one, and it is unlikely that he was indifferent about the matter-just as unlikely as that he would have been indifferent as to which notes were played. For Beethoven cared so deeply about the tempi at which his works were performed that, according to his friend Anton Schindler whenever he heard about a performance of one of them, “his first question invariably was: ‘How were the tempi?’” Every other consideration seemed to be of secondary importance to him.

In fact, Beethoven cared so much about such issues of tempo that he left more detailed instructions on the subject than did virtually any other composer. He headed each movement of his symphonies, and each section of each movement, with both an Italian descriptive phrase (such as Allegro molto vivace or Adagio) and a metronome marking. In taking such care in this matter (which was unprecedented) he assumed that he was leaving for future performers not only precise indications of the speeds (and hence the characters) of the various movements and sections, but also the key to the successful realization of the works as wholes. In a letter to his publishers, Schott and Sons, Beethoven wrote: “I have received letters from Berlin informing me that the first performance of the Ninth Symphony was received with enthusiastic applause, which I attribute largely to the metronome markings.”

So why should his tempo indications for the symphonies have been so rarely observed in performance? Most conductors have rejected the indicated tempi because they consider them too fast. Ironically, though, both the final movements of the Fifth and Seventh are traditionally played faster than Beethoven’s indicated tempo, demolishing the common argument that since all his tempi are too fast, it is reasonable to assume that his metronome was broken. Moreover Beethoven’s letters make it clear that he took great pains to have his metronome in good working order.

Some have suggested that Beethoven’s deafness could have prevented him from hearing it correctly, though since the metronome had a visible pendulum, he did not need actually to hear it ticking to be able to use it. Yet another speculation has been that the ethereal instruments of the inner ear may move more fleetly than do those of the real acoustical world. And many musicians have continued to resist the notion that Beethoven’s supreme genius could (or should) be fettered by the ticking of a mere machine. Beethoven himself had no such qualms, however, as is clear from the comment quoted below, published in the Wiener Vaterländische Blätter of October 13, 1813: “I look upon the invention of the metronome as a welcome means of assuring the performance of my compositions everywhere in the tempi conceived by me, which to my regret have so often been misunderstood.”

But to return to our question: Why should Beethoven’s tempo indications so rarely have been observed in performance?

More than any other compositions, Beethoven’s symphonies-especially the uneven-numbered Third, Fifth, Seventh, and Ninth-fired the imaginations of the Romantic composers and interpreters who followed him. But when works of one age are interpreted according to and even play a significant role in defining the aesthetics of a later age, something of the works’ original spirit is lost. Romantic interpreters, influenced by Wagner and Liszt, favored extremes of tempo and frequent, even violent, fluctuations between those extremes. They tended to equate slow tempi with profundity and significance - thus the slowing up of “the hammer blows of Fate” at the beginning of Beethoven’s Fifth, while at the other extreme, Wilhelm Furtwängler, one of the most revered post-Romantic interpreters of Beethoven, propelled the conclusion of the Ninth Symphony into a frenzy of religious ecstasy by taking a tempo seventy points faster on the metronome than the one indicated by Beethoven!

These interpretative decisions have come down to later generations, often in somewhat modified form, as powerful performance traditions that the present day performer defies at some risk. The danger is that adherence to the metronome indications will lead to performances that are mechanical and devoid of passion. But it is important to remember that tempo is not an end in itself but a medium that allows different expressive forms, just as water allows for coral reefs, fish and anemones and air makes possible pine forests, deer, and human beings. Those that inhabit these elements do not notice water or air: the tempo is never the subject of a successful performance. Perhaps, if we can hear this music free of the bar lines, fidelity to the metronome indications need not necessarily result in a sense of mechanical regularity or a lack of breathing space or passion. It all depends, after all, on what is done with and within the chosen tempo.

In working with Beethoven’s tempi over the course of many years I have found that they have come to seem absolutely right, and in fact liberating rather than constricting, for they open up a wealth of interpretative possibilities that would not work at slower tempi and that seem true to the essence of Beethoven’s musical spirit. 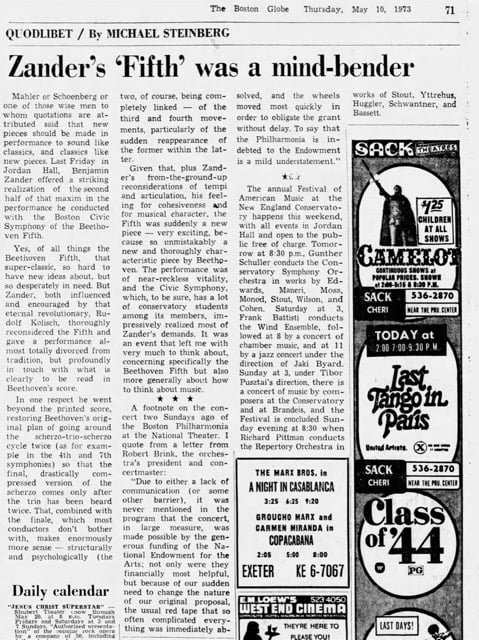