How Music Transforms Us (TED Radio)

With a new year comes new opportunities to transform ourselves and how we view the world.  In that spirit we offer this wonderful interview with Maestro Zander and Guy Raz from the TED Radio Hour. 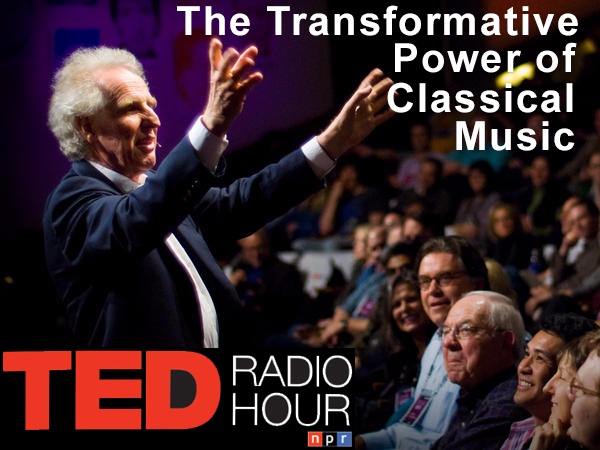 The following is a transcript of Benjamin Zander's recent TED Radio Hour interview with host Guy Raz on November 8, 2017.  Listen below!

GUY RAZ, HOST: When can you remember a time when you played music for somebody, and it had a profound change on what was going on around around them?

BENJAMIN ZANDER: It's hard for me to remember a time when I played music when it didn't have that effect on people because that's the given. I consider music to be a transformational experience.

RAZ: This is Benjamin Zander.

RAZ: Which, by the way, we're hearing right now with Benjamin conducting. So when Benjamin Zander says music is transformational, he doesn't necessarily mean it can change the world but that it has the power to change us from within.

ZANDER: Mendelssohn said that music is a much more precise language than words. And when you think how easily we misunderstand words - and God knows there's enough evidence of that at this time.

ZANDER: But music speaks directly to the heart. It speaks through the molecules. And it's irresistible.

RAZ: Benjamin described the moment when he discovered this power as a conductor from the TED stage.

ZANDER: Now, I had an amazing experience. I was 45 years old. I've been conducting for 20 years. And I suddenly had a realization. The conductor of an orchestra doesn't make a sound. My picture appears on the front of the CD.

ZANDER: But the conductor doesn't make a sound. He depends for his power on his ability to make other people powerful. It was totally life changing. People in my orchestra came up to me and said, Ben, what happened? That's what happened.

And, you know, I have a definition of success. For me, it's very simple. It's not about wealth and fame and power. It's about how many shiny eyes I have around me.

RAZ: Walk me through your understanding of the physiological experience of music. What is it - just - what happens to us?

ZANDER: Well, it's a fascinating thing. It's based in nature. Now, we're talking about tonal music. Atonal music is another matter. It says something else. But in tonal music, if I go, (singing) da, da, da, da, da, everybody feels in that last note a desire which is in that note to resolve itself to (singing) da. And if it doesn't, there's a frustration. There's a sense of expectation not fulfilled.

And so since everybody feels that, the composer can play with the tonal language in such a way that he can set up expectation, satisfaction, a sense of coming home, a sense of being far removed from home and all the emotions that human beings are capable of feeling...

ZANDER: ...Can be represented in music.

RAZ: So music is emotive, right? It draws you in. And it can change the way you experience something. So it's like why - when you watch a movie, it can make you cry, right? But if you saw that same movie without the music, it wouldn't have the same effect. I mean, there's something emotive about music that pulls us in that kind of preys on our emotions. And I don't know why. Do you know why?

ZANDER: Well, it - just think of it the other way. Can you imagine a movie without music?

(SOUNDBITE OF MAX RICHTER'S "THE QUALITY OF MERCY")

ZANDER: It's the music that generates the emotions that releases the human experience. And it does it, of course, through the way that music works, which is it doesn't go through the brain. It goes through the molecules.

(SOUNDBITE OF MAX RICHTER'S "THE QUALITY OF MERCY")

ZANDER: Shifts the molecules. It gives you whatever feeling. And, of course, the great composers of film music know how to do that - to turn it on as if they're turning a tap or dials on a machine.

RAZ: There is something about it that changes the experience of - whether it's a movie you're watching or a moment you're experiencing. It can make it so much more profound. I mean, music - it's like - it's like putting salt on a tomato, you know?

ZANDER: It's even better than that.

ZANDER: Yeah. No question about it. It's the great bringer together of music. And it's one thing to hear it in your earphones alone. It's quite another thing to hear it in a concert hall with 2,000 other people who are all experiencing it together and whose reaction and spontaneous enthusiasm at the end is part of the experience.

And as I approach my 80th birthday, I'm not - I have no intention of stopping at any point from doing it because it's my lifeblood. That's where I get my joy and my life from. It's the sense that people's lives are really transformed.

RAZ: So Ben, on the TED stage, you play this piece by Chopin. But first, you ask everyone to do something, right?

ZANDER: Would you think of somebody who you adore who's no longer there - a beloved grandmother, a lover - somebody in your life who you love with all your heart? Bring that person into your mind, and you'll hear everything that Chopin had to say.

RAZ: Why did you choose that piece by Chopin? What is it about that piece?

ZANDER: Well, thank you for asking. It's a very simple idea. It begins on a note and then it falls over the course of the piece from that note, which is the dominant, to the tonic at the end. And most pieces of music actually have that journey from away to home, from the dominant to the tonic. It does it in an extremely beautiful way. And it's emotionally amazingly satisfying. It's a masterpiece. And so in a very few moments with a short explanation, you can actually reach everybody.

ZANDER: Exactly. Music is a story. It's an unfolding of a story. And it opens the emotional pause to all of life's experience. And that's the purpose of transformation.

ZANDER: You may be wondering.

ZANDER: I'll tell you what happened to me. I was in Ireland during The Troubles 10 years ago. And I was working with some Catholic and Protestant kids on conflict resolution. And I did this with them - risky thing to do because they were street kids. And one of them came to me the next morning. And he said, you know, I never listened to classical music in my life. But when you played that Chopin piece.

ZANDER: He said my brother was shot last year, and I didn't cry for him. But last night when you played that piece, he was the one I was thinking about. And I felt the tears streaming down my face. And, you know, it felt really good to cry for my brother. So I made up my mind at that moment that classical music is for everybody, everybody.

RAZ: Benjamin Zander. You can see his entire talk at ted.com.

UNIDENTIFIED CHILDREN: (Singing) I know I can be what I want to be. If I work hard at it, I'll be where I want to be.

NAS: (Rapping) B-boys and girls, listen up. You can be anything in the world. In God we trust.

RAZ: Hey, thanks for listening to the show this week. If you want to find out more about who was on it, go to ted.npr.org. And to see hundreds more TED talks, check out ted.com or the TED app.

If you want to let us know what you think about the show, please go to Apple Podcasts and write a review. Also, you can write directly to us. That's tedradiohour@npr.org. And you can tweet us. It's @tedradiohour. I'm Guy Raz. And you've been listening to ideas worth spreading right here on the TED Radio Hour from NPR.

UNIDENTIFIED CHILDREN: (Singing) I'll be where I want to be, be, be. Transcript provided by NPR, Copyright NPR.

Years of conducting a world-famous orchestra have shown Benjamin Zander the power of classical music. He says music speaks to our emotions — and has the ability to reach everybody.

Benjamin Zander is the Grammy-nominated conductor of the Boston Philharmonic Orchestra, which he founded in 1979.

He also conducts the Boston Philharmonic Youth Orchestra. In addition, Zander travels all over the world as a guest conductor and leadership speaker. He is the co-author of The Art of Possibility.