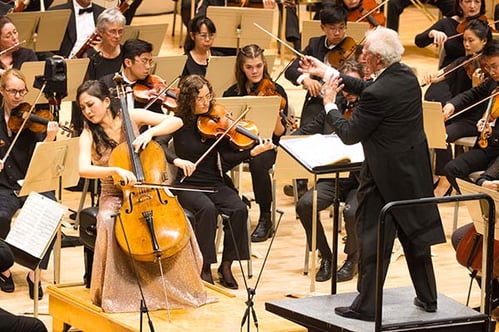 For a limited time, the video of the Boston Philharmonic Orchestra's November 12 performance of Dvořák's Cello Concerto with soloist Hayoung Choi and Brahms's Second Symphony is available to stream online.

"The vehicle of celebration was Brahms’s halcyon Second Symphony, the first work he led back in 1972. Zander seemed inspired by the occasion, leading with a particular expansiveness of gesture, and the orchestra responded by infusing its playing with a noted energy and rhythmic elan... the woodwind solos drifted into the hall with an authentically Brahmsian sense of grace, and the finale, boldly profiled and full of driving tempos, brought the crowd in Symphony Hall swiftly to its feet. -Jeremy Eichler

"Zander led the BPO in an accompaniment that never wanted for direction or purpose. His was an unsentimental but never unfeeling Dvořák. Tempos moved rightly, textures were clean. The discreet woodwind writing in the Allegro’s exposition spoke vitally, while the slow movement’s opening hymn for winds and trombones was a picture of serenity. Throughout, the conductor’s feel for the music’s architecture ensured that the performance didn’t get muddled by the concerto’s various melancholic turns. It was, in a word, a self-justifying reading—which is precisely what such canonic fare demands." -Jonathan Blumhofer