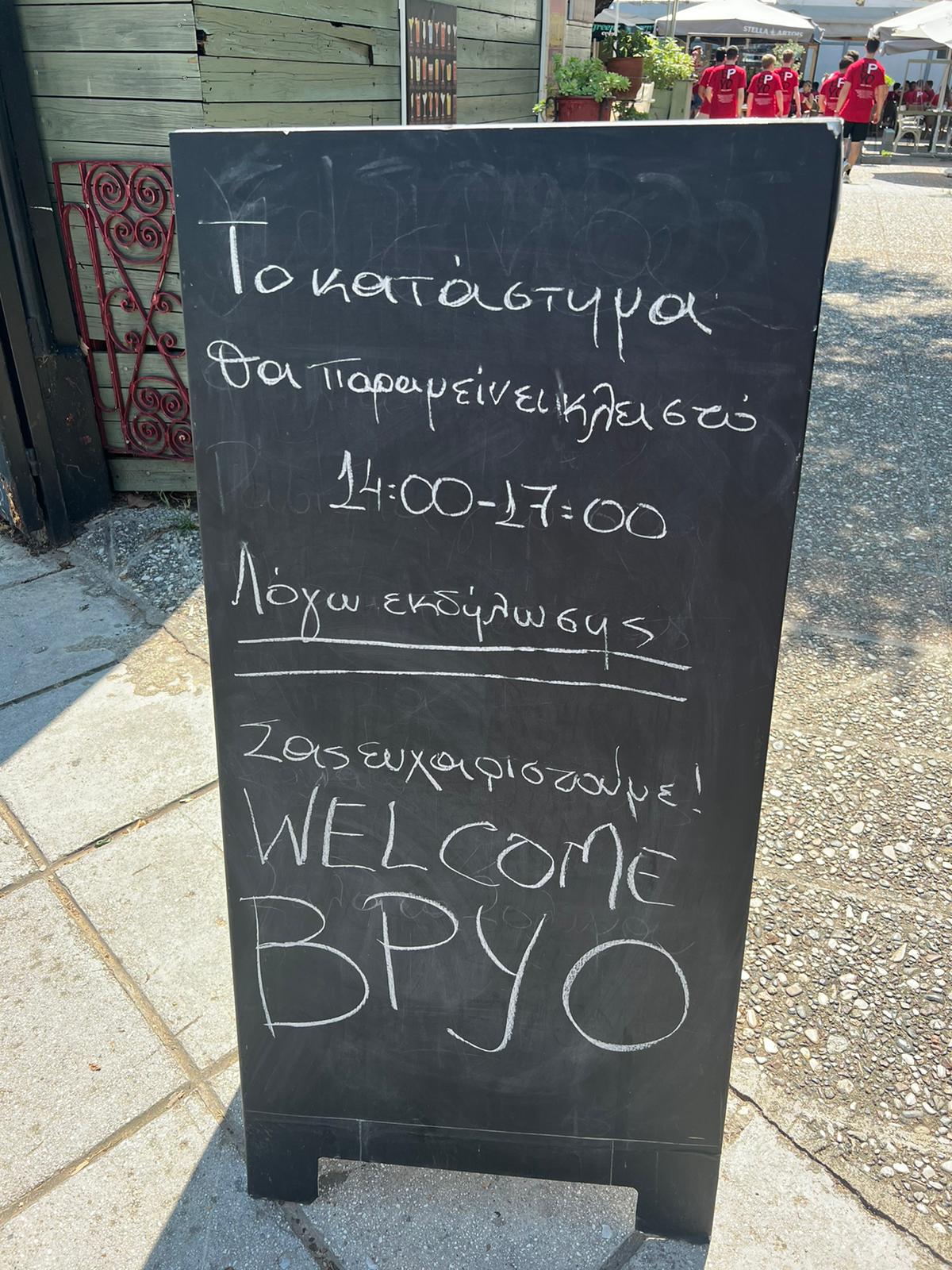 Back in the mid-‘80s, when he was conducting and recording Franz Josef Haydn’s oratorio, The Creation, in then-West Germany, Leonard Bernstein penned a birthday poem for his longtime secretary, Helen Coates. As was his wont, it was a trope on something familiar, this time Creation’s chorus “Die Himmel erzählen” (“The heavens are telling”), and the opening runs: “The heavens are yellin’/Hooray for Helen!”

It was, perhaps, irreverent, but I found myself humming a modified version of that lyric after the BPYO’s performance at the Thessaloniki Concert Hall on Friday night. The heavens were definitely yellin’ about something: our walk to the buses and our latest midnight dinner was stopped in its tracks by a furious thunderstorm and torrential rains, an occurrence, we were assured, that never happens in Thessaloniki in June.

Of course, the BPYO’d never before played in Thessaloniki in June, so maybe that had something to do with it. Was it a kind of omen? Greeks are famously superstitious. Or was Mahler roaring his approval of Sofia Fomina’s enchanting account of “Das himmlische Leben” from above? Probably neither – though I’d kind of like to think it was the latter. Regardless, the sudden storm made for a memorable ending to our short stay in this beautiful port city on the Thermaic Gulf of the Aegean.

We arrived in Thessaloniki on Thursday, after a draining seven-hour commute from Athens. As usual, the drive started behind schedule due to Athens’ heavy traffic. It was largely uneventful but afforded a sweeping view of the countryside as we travelled north: lots of mountains (Greece, we have it from one of our guides, is the most mountainous country in Europe after Norway), vineyards, farms, waterfront. About ninety minutes before we got to our destination, we passed Mount Olympus, shrouded in clouds (perhaps the gods were in-house?). 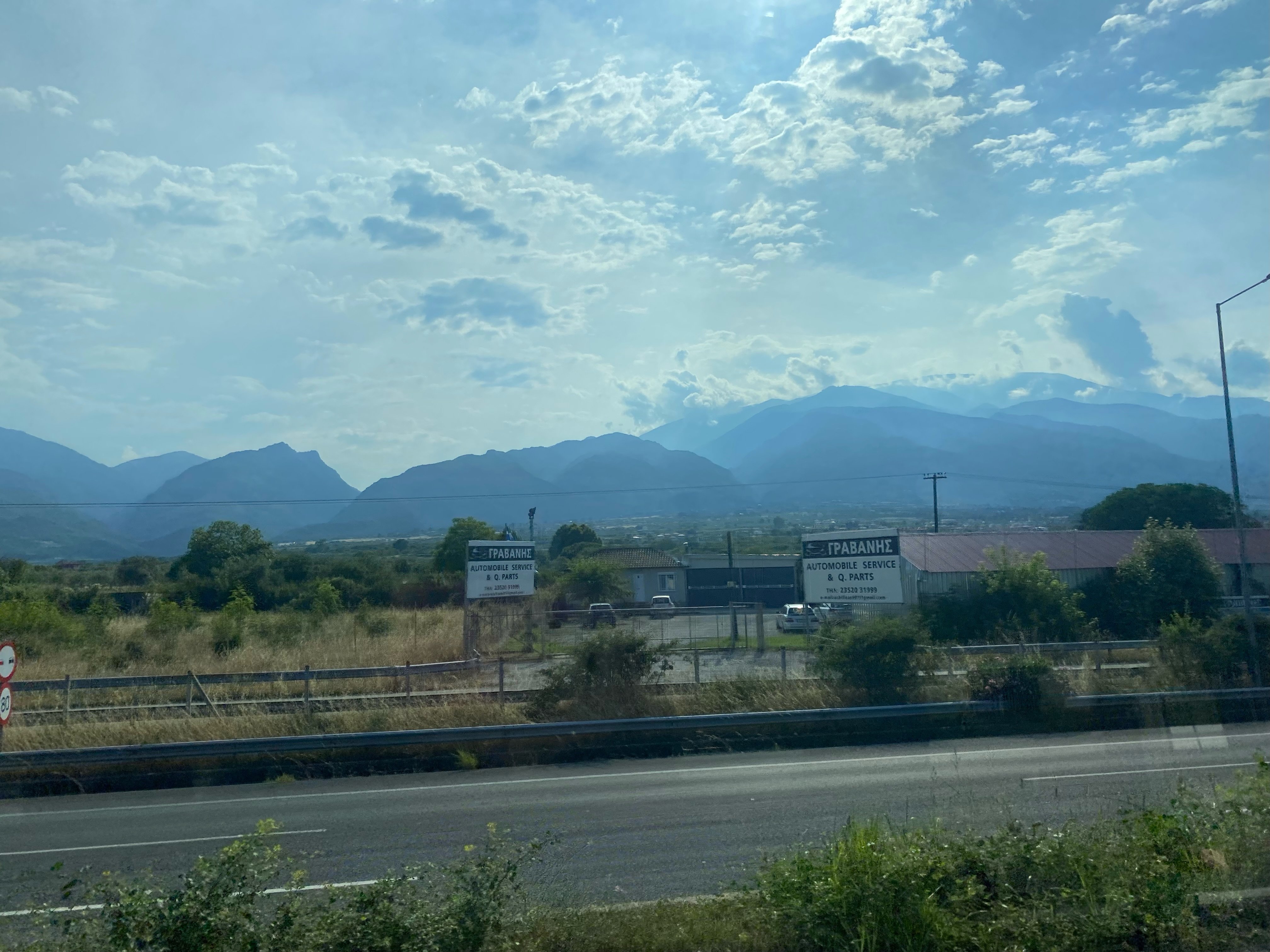 Mount Olympus (in the center-right background), shrouded in clouds.

The itinerary for Thessaloniki left little time for relaxation and exploration so, right after dropping bags off at the hotel, the orchestra was whisked off to the concert venue for a two-hour rehearsal. They were exhausted and, as Benjamin Zander told me later, he had thought of calling the whole thing off.

But, instead, they kept to the schedule, Ben channeling a lesson he had learned from a story his father had told about playing, many years ago, in an orchestra led by the great conductor Arthur Nikisch. Not one to under-prepare his ensembles, Nikisch had subjected his players to a grueling rehearsal the day of one performance. Depleted, they prepared to trudge through the night’s concert when, as the conductor strode to the stage with purposeful energy, Ben’s father reported that something like an electric current went out into the orchestra, restoring them to full strength and freshness. The moral, Ben noted, was that we have immense power to transform even the most exhausted people into effective performers by our intentional energy. 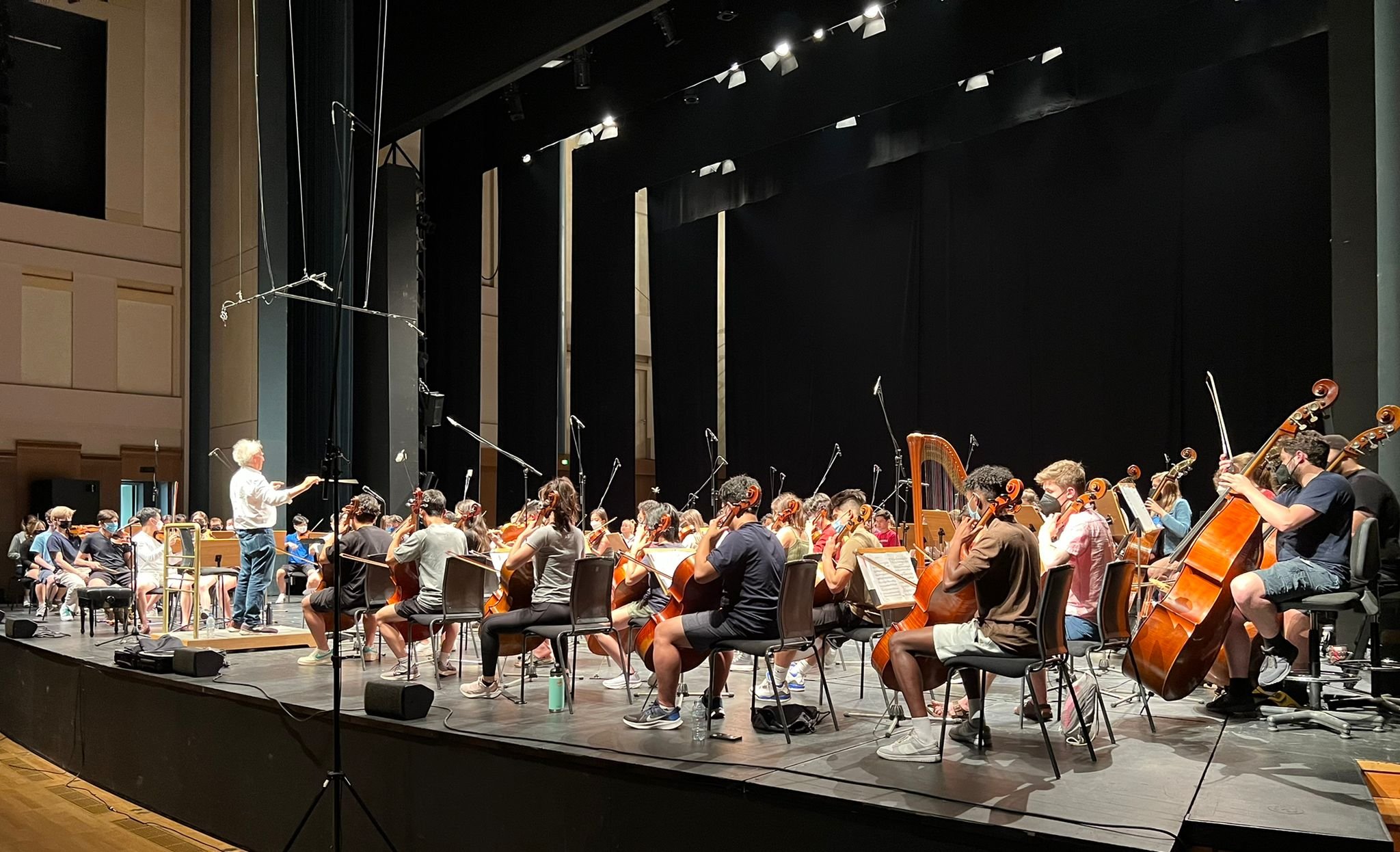 Benjamin Zander and the BPYO rehearsing at the Thessaloniki Concert Hall on Thursday.

Accordingly, a similar thing transpired on Thursday night, the BPYO plugging in to Ben’s intentionally vigorous presence and delivering playing of notable spirit. They returned to the hotel late (traffic in Thessaloniki is, alas, much the same as in Athens) but clearly vitalized; the next morning there were several conversations over breakfast noting the dramatic change that had taken place in the ensemble’s collective mood the night before.

Friday morning’s schedule having been rearranged so as to provide time for the players to get some needed rest, the morning was free. While a goodly number slept in, a respectable tally took advantage of the free time to explore the city. Thessaloniki’s a bit younger than Athens: it was founded only about 2300 years ago and is named after the half-sister of Alexander the Great. It’s got a completely different vibe than Athens: more chill, relaxed, laid back. Also, if you’re down by the waterfront, there’s often a much-appreciated breeze to be found. Looking down towards the Aristotelous Square in Thessaloniki.

It’s a fun city to wander, though, like in Athens, walking around Thessaloniki can be a bit like stepping into a Jason Bourne movie. As in New England, aggression seems a prerequisite for obtaining a license here. Drivers have the right of way and they press their advantage. As a result, unlike in Boston, pedestrians know to respect traffic signals, and they do – or else. Granted, in these parts you’re more likely to be run over by a Peugeot, a Renault, a Citroën, or a Smart Car than, say, a Sorento or a Suburban, and the damage may be commensurately less. Or perhaps not; it’s not a theory any of us seem inclined to test out.

But it doesn’t end there: the natural excitement of discovering, say, the White Tower of Thessaloniki, the Roman Agora, or the basilica of Ayios Dimitrios is further enhanced by the fact that motorcycles, scooters, mopeds, and other gas-powered two-wheeled vehicles regularly utilize the sidewalk as an extension of the street. If nothing else, it ensures you’re on your toes (rather literally) while on a stroll. 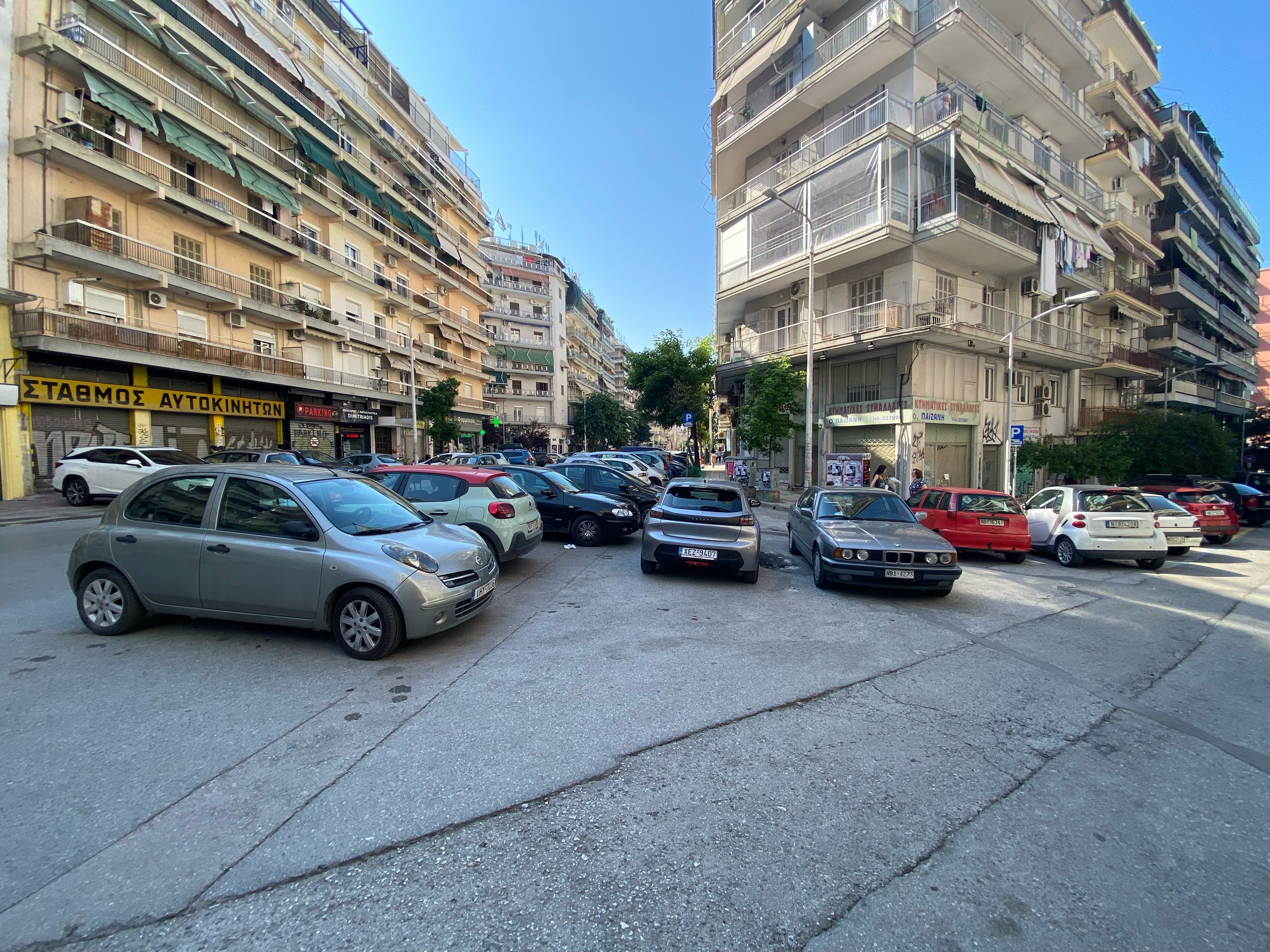 The parking situation on and around a Thessaloniki street corner near the ruins of the Greek Agora and Roman Forum.

Miracle, coincidence, or something else, we’ve thus far avoided any kind of vehicular mishap, though it was in Thessaloniki that our group got its first positive COVID test. Otherwise, we’ve managed to stay pretty healthy thus far (fingers crossed I didn’t just jinx us).

After the open morning, the orchestra took buses over to the concert hall for a conducting masterclass, a second rehearsal, and, finally, the night’s concert. This was my first time in the space (I’d passed on the previous night’s rehearsal to get some work done at the hotel); it’s an impressive venue. 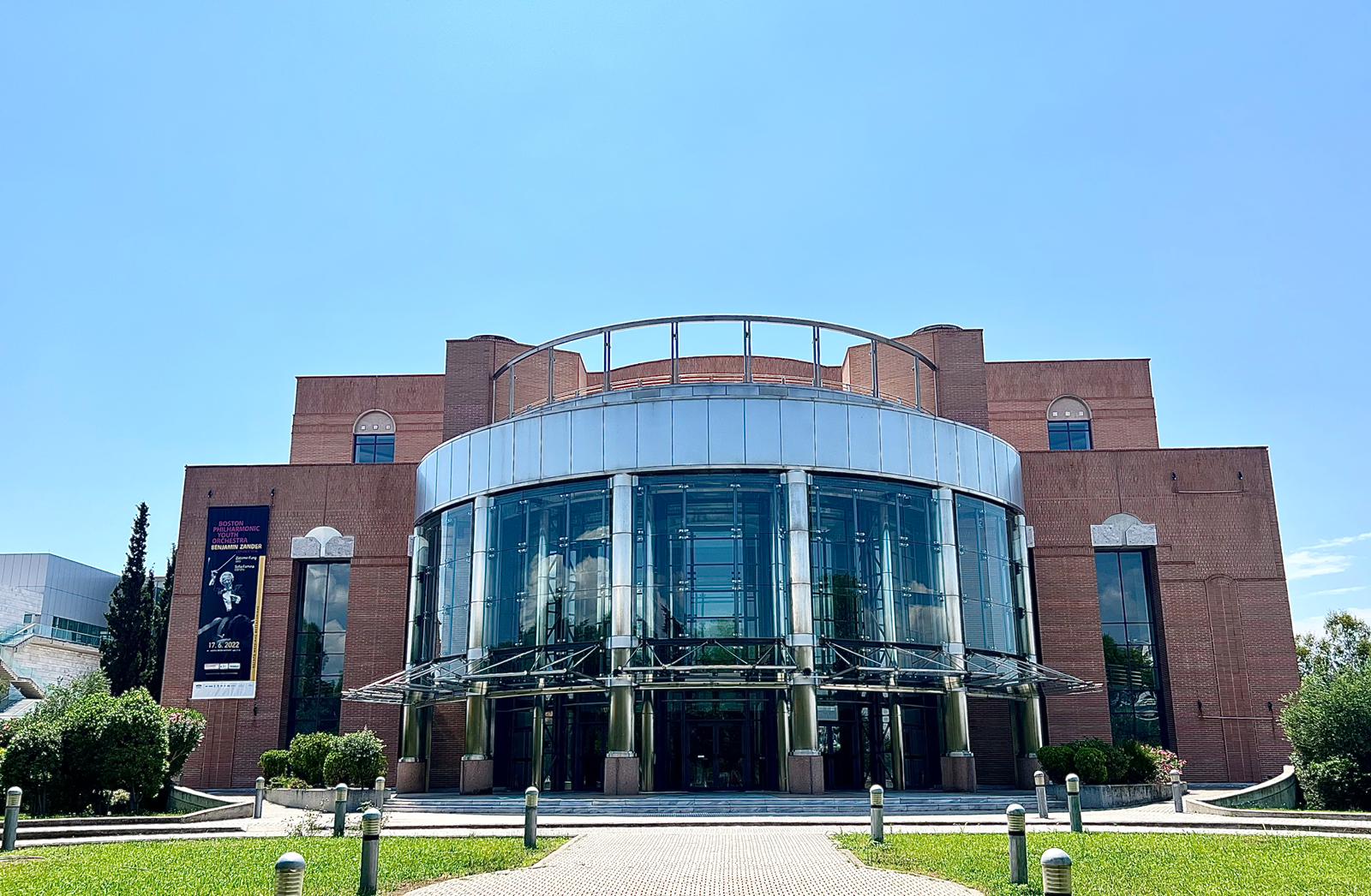 The facade of the Thessaloniki Concert Hall.

Located right on the waterfront, the Thessaloniki Concert Hall is, like the Athens Megaron, a formidable structure with a wide atrium (for we who frequent the cramped confines of Boston’s concert venues, this trip has already been, shall we say, envy-inducing) and an interior that looked enormous. However, it’s not cavernous; the seating is around 1400 (the seats – New England venue designers: take note! – are cushioned and actually comfortable). Though its acoustics weren’t quite so pristine as those in Athens (the stage is designed for theatrical presentations so a good bit of sound just goes up into the space above) the room had a kind of soothing effect on the BPYO’s sonority on Friday, giving some of the high-frequency instrumental lines a pleasing tonal roundness.

The first of the day’s activities involved Ben coaxing, cajoling, and encouraging his three charges – two Greek conductors and his assistant, Alfonso Piacentini – as they worked through passages in Tchaikovsky’s Romeo & Juliet Overture and the first movement of Mozart’s Symphony No. 35.

All acquitted themselves admirably, particularly the last guy, who was profoundly nervous and, as a result, started off the Mozart with some exaggerated, wiry gestures. But – as in the previous night’s rehearsal – the BPYO really picked up on his energy. Ben stopped him after about fifteen seconds, gave him a hug and told him he was wonderful and should never be nervous about conducting again. After that, he settled down and, still plenty charismatic, led a driving exposition of the Mozart movement.

A group of us followed the post-masterclass lunch with a visit to a rooftop café across from the Hall and so missed the rehearsal; from our sources, we later learned that it seemed to go well. The concert that followed certainly did. 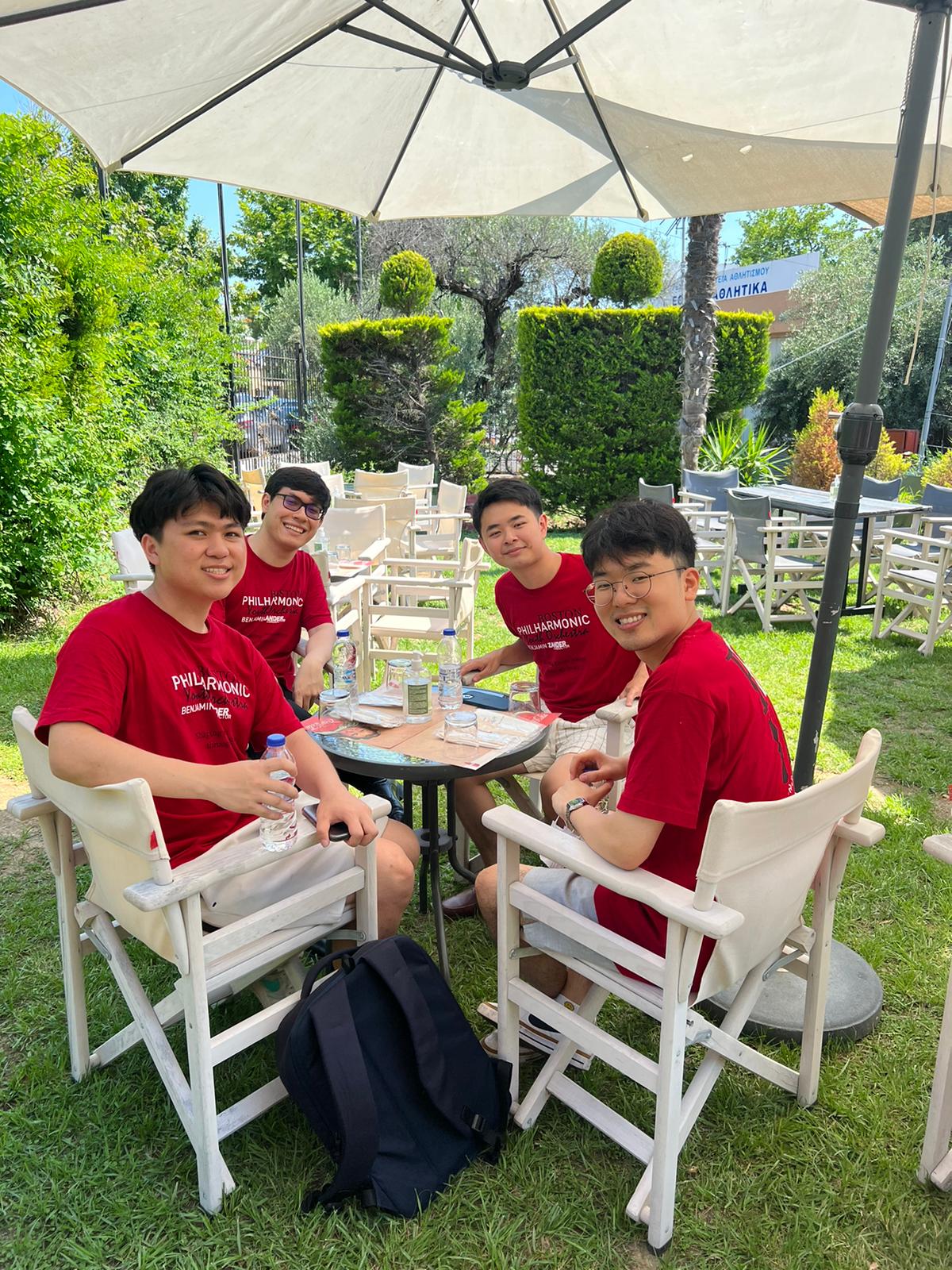 This was the BPYO’s second performance of the tour and it featured, fittingly, the trip’s other program: Shostakovich’s Festive Overture, Piotr Tchaikovsky’s Variations on a Rococo Theme, and Gustav Mahler’s Symphony No. 4.

That Shostakovich, who could write such searingly profound music, could also turn out light and exuberant fare of the first order is one of the mind-blowing ironies of his career. Friday’s Festive Overture was just that – a firehose of joy – from beginning to end.

The Rococo Variations are, unlike some of Tchaikovsky’s output, similarly unaffected by gloom. Our soloist, Zlatomir Fung, told me in Athens that this is the score he’s performed most often with an orchestra. He certainly sounded comfortable in it on Friday. I don’t think it’s going too far to say that, from his singing, opening entrance to the fireworks of the closing pages, Zlatomir’s playing recalled Rostropovich and Ma in this piece: it was so beautifully inhabited and thoroughly characterful.

To hear him interact with the BPYO in more of a conventional solo-ensemble piece than the Elgar was also a treat. True, there’s not an immense amount of conflict built into the Variations, but he and the orchestra engaged with each other with considerable panache, elan, and delicacy (particularly in the minore variation).

After this came an excellent Mahler Fourth Symphony. Tempos were perfectly judged and parts of it – like the opening several minutes of the glorious Poco adagio – were flawless. Concertmaster Eric Chen’s second-movement solos possessed all the menace one might want (you don’t often hear violinists attack its articulations with Eric’s gusto); his short duet with co-concertmaster Nikki Naghavi was exceptionally well matched. Throughout, textures were clean – one could catch nearly everything going on in the big first movement and the delicate hand-offs and imitations of nature in the finale were exquisitely done.

That last movement also featured Sofia Fomina singing Mahler’s setting of “Das himmlische Leben,” a child’s vision of heaven. I’ve heard this piece in countless recordings and performances, and, after Friday, I fully agree with Ben’s assessment that Sofia’s take on this music is perfect: pure, sweet, innocent, totally unaffected. (Her feel for the “Song to the Moon” from Dvorak’s Rusalka, the night’s encore, was equally persuasive.)

The night’s crowd – the Hall was a touch more than half full – responded to it all with knowing applause. Though smaller than the Athens audience, they were, perhaps, even more fervent and behaved in the best European fashion, staying in their seats clapping and cheering heartily (unlike in America, where the most trivial effort is often rewarded with a standing ovation, even excellent performances don’t automatically get them over here).

Afterwards, we packed up for what looked, for once, to be an on-time departure to dinner at 11:30 – only to be thwarted by the yellin’ heavens. That was OK: we did some yellin’ too, as we ran from the hall to the street to the bus, led by, of all people, Sofia. The scheduled outdoor meal was, somehow, shipped to the hotel and finally eaten, by those who were still awake, after 1:30 a.m. If you were one of those elect, you were lucky: our Greek hosts are feeding us exceedingly well.

After that, it was to bed and to pack up: on Saturday, we’re off, again, this time to Corfu. 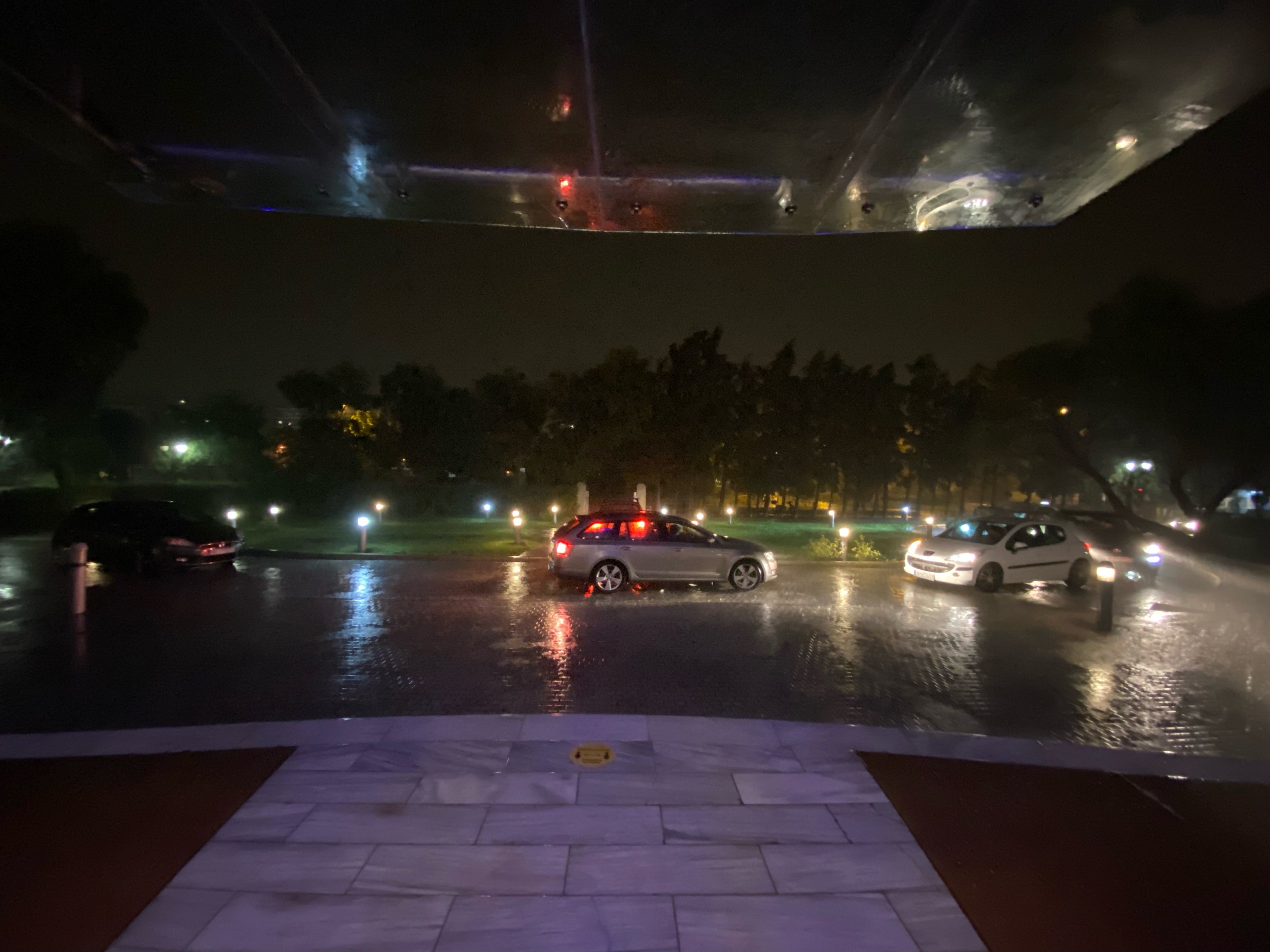 The heavens are yellin'...