40th anniversary musical celebration not to be missed! 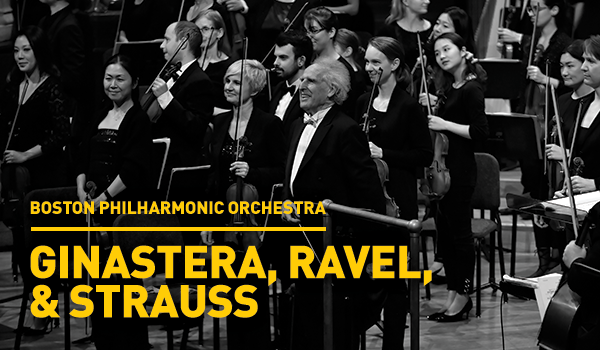 A note from Benjamin Zander

Last night’s dress rehearsal might have been the most thrilling 2 1/2 hours I have ever spent as a musician! I say "two and a half hours” because, for the first time in 40 years, I ended the rehearsal HALF an HOUR early!  The orchestra played with such fire and brilliance, such all-out passionate conviction and such staggering virtuosity that, at the end of playing through Ein Heldenleben at 9.25 p.m. I said “Thank you, Good night.”  This is an orchestra on fire!

And the program is so colorful, so varied, so beautiful and so gobsmackingly, headsplittingly challenging for every department and is being met with such astonishing playing and such visceral excitement that some of the musicians seem to realize that they are participating in a historical event.

What is afoot?  Well, yesterday afternoon at about 4 p.m. I heard, for the first time, a recording that I didn’t know existed: Strauss conducting Ein Heldenleben with the Vienna Philharmonic in 1944. It’s a terrible recording and the playing is incredibly scrappy, which is probably why it has only had 700 views on YouTube and also explains why only two people out of the 109 in the orchestra had heard it.  But what it reveals is a completely different vision for the piece. My favorite recording had been Mariss Janson’s with the Südwestrundfunk orchestra, which clocks in at 49:49 minutes and my performance with the BPO was shaping up in that general direction. Indeed, Kevin Owen, our magnificent horn player, told me that mine was the slowest of the many performances he had done with orchestras in the area, including the BSO and my own in 2006.  In view of the extreme demands that the piece makes on the first horn player, I sensed he was hoping that I would move it along a bit, but he is not the interfering type. Imagine my astonishment when I saw that Strauss’s performance clocked in at 38:49! Was there anything I could do just two days before the concert?  I told the orchestra what had happened and said that since tomorrow night is a Discovery Concert "let’s see if we can 'discover' what Strauss was after, without worrying too much about perfection. After all, Strauss himself hadn’t been able to get much precision from the, by 1944, severely compromised Vienna Philharmonic, let’s go for it!"

I told the orchestra that on the recording, the opening was wildly impassioned and driven (MM = 126) but that at the Recapitulation when the Hero has vanquished his enemies it settles into a magnificently confident and noble MM =108! I also warned them that the depiction of the critic’s - the Hero’s enemies - was much faster than I had ever heard it and that it made them seem awfully mean spirited and small minded. As for the Battle it was at an out-of-control but fiendishly thrilling MM=144 (I confess I had settled for a safe 126! Whoever heard of a safe battle?). The love duet soared ecstatically while the end seemed to achieve a timeless sense of peace and contentment.
What happened next was a kind of a miracle.  We set off and I conducted the performance that I had remembered from hearing Strauss’s recording that afternoon. Everything was different, but the orchestra played it as if they had known all along that that was how the piece should go. It was the most inspired playing I had ever heard from the BPO!! And it was perfectly together, as if everybody was thinking as of one mind. They were!  Strauss’s mind. Kevin Owen had a broad smile on his face whenever he wasn’t playing!
Not the least remarkable thing was that the violin soloist, playing the most demanding violin part for a concert master in the entire repertoire, was doing so for the first time. Joanna Kurkowicz, our esteemed concert mistress of 26 years and the person for whom I had planned this performance, had to withdraw on Monday because of a medical scare. I had called on Matthew Vera (note that name!), a member of the first violin section, to fill in for the rehearsal that night because I knew he was passionate about Strauss and had studied the part while in an NEC repertoire class several years ago. But no one could have expected what happened last night in Sanders Theater: unbelievably, he played the part as well as I had ever heard it played.  Astonished, our first flute, Lisa Hennessey said to me afterwards, “That is the best performance of the solo I have ever heard.”  It turns out Matthew was one of the 700 who had heard Strauss’s recording, so he had no problem in portraying the manifold characters that are displayed in the complex portrait of  the Hero’s companion (and Strauss’s volatile wife, Pauline).
The Strauss is the second half of the program.  The first half contains two other mini "concertos for orchestra" - Ginastera’s Variaciones concertantes and Ravel’s Daphnis and Chloé. Putting all these three extremely demanding works on the same program was my way of recognizing the extraordinary level that the orchestra has reached as it celebrates its 40th birthday.
The Ginastera is a trip to South America in the company of the many exquisitely characterful soloists that lead each section of the  BPO, while Daphnis tests any orchestra to its limit of subtlety and tonal and rhythmical sophistication. In the performance last night, in the pristine and warm acoustics of Sanders Theater, Daphnis sounded the way a restored canvas looks, with every intricate detail and color perfectly clear, every balance, every dynamic and every tempo just as Ravel composed it.  Let me know if you have heard a performance that does that. I haven’t heard one.
How could all this happen?  Because the BPO is the gathering place of some of the best musicians around here - seasoned players like Kevin Owen and Lisa (who plays the famous flute solo in Daphnis more truly than any performance I have heard because, for once, she plays exactly what Ravel wrote at exactly his marked tempo), Rafi Popper-Keiser and Lisa Suslowitz, and Rachel Braude (former piccolo player with the St. Louis Symphony, who will play the famous piccolo solo from outside, as the composer demands, but which we never hear), who play with more daring than most of their colleagues in the big orchestras. And then, there are the young members like Mat Vera, who dropped out of NEC a few years ago, because he couldn’t afford it, but hopes to return as a graduate next year. Only in Boston could such an orchestra exist!
And that is just the BPO.  The Boston Philharmonic Youth Orchestra is gearing up for a performance of Shostakovich 10th on November 25th in Symphony Hall that promises to be one of its very best and with a soloist who has wowed the world with a performance on YouTube that just passed 20 million views, with over 7,000 comments, of the very concerto she is playing in Boston - Rachmaninoff 2nd Piano concerto!
What an event!