"An auspicious opening" BPO Reviews and On Demand 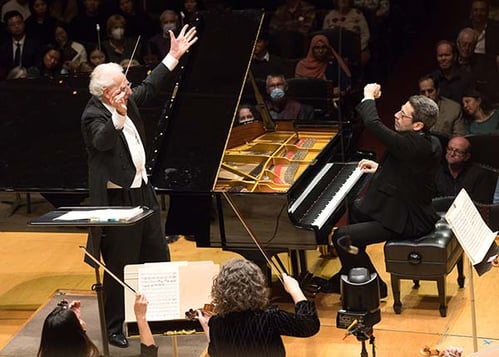 For a limited time, the video of the Boston Philharmonic Orchestra's October 19 performance of Beethoven's Fourth Piano Concerto with soloist Jonathan Biss and Rachmaninoff's Second Symphony is available to stream online.

"Zander conceives of this work as an organic unity, and he kept the tempos flowing, the phrasing articulate, and the music’s structure powerfully clear. For its part, the orchestra...sounded in particularly strong form...Certain brass passages rang out with an organ-like sense of ensemble unity, and the strings...played with warmth, palpable investment, and an appealingly dark-hued sound...All told it was an auspicious opening to the orchestra’s new season" -Jeremy Eichler
View the full review in the Boston Globe

"Zander allowed for the music to unfold naturally while taking time to revel in each passing phrase. Strings and winds realized the main theme’s grand sweep, which clarinetist Rane Moore brought to sweet-toned resolution...Zander painted the finale in bold colors. The brass matched the strings’ fervor, with the winds bringing an urgency that carried into the closing measures. This was a revelatory Rachmaninoff Second, led by Zander with customary elan." -Aaron Keebaugh
View the full review on Boston Classical Review

"A bevy of glowing solos – including those from principal clarinet Rane Moore, principal oboe Nancy Dimock, and English hornist Andrew van der Paardt – were only an extension of the larger BPO’s wonderfully discreet ensemble playing in that movement... The BPO’s brass section (especially the horns) played with exemplary power and finesse in the second and fourth movements...This was, for certain, some conspicuously rousing, meaningful Rachmaninoff." -Jonathan Blumhofer
View the review on The Arts Fuse.

Boston Musical Intelligencer: A Great Night from the BPO

"One noticed first of all the excellent athleticism of the full string section, which was required to shoulder...the main melodic material in the symphony. It didn’t faze them for a moment...I was convinced by this complete performance, as never before, that this almost insupportable symphony is a beautiful work, and I listened to its brave execution with complete attention, as never before. I would consider it anywhere as a dangerous choice for programming. But here, in a packed Symphony Hall, Ben Zander brought forth the impossible and the magnificent." -Mark DeVoto
View the review on the Boston Musical Intelligencer