A Year of Raves

Before 2017 slips away into memory, it is good to glance back at some of the musical highlights of the past year.

A surprising number of the performances of our two orchestras have made it into 2017's top 10 lists of critics both locally and across the country.

It is with some pride that we share what they had to say below.

BPO's performance of Mahler's Symphony No. 2 chosen by Boston Classical Review as one of Top 10 Classical Concerts of 2017

"The music of Mahler is a specialty for Boston Philharmonic conductor Benjamin Zander. Recent seasons have featured him leading the orchestra in the composer’s First, Fourth, and Ninth Symphonies. But this year’s performance of Mahler’s Symphony No. 2, was a palpable journey from darkness to light. As is often the case with Zander’s performances of Mahler’s works, details were aplenty. What made this reading stand out, though, was its sense of the musical line and an interpretation that reached into deep spiritual depths. The singing of Chorus pro Musica and soloists Claudia Huckle and Sonja Dutoit Tengblad matched the glow and splendor of the orchestra’s sound." Read the entire article→

Lloyd Schwartz, NPR’s Pulitzer prize winning music critic, in his classical round up of the year, wrote:

"The BSO, mostly under James Levine, has presented all six of John Harbison’s symphonies. But it’s been almost six years since they’ve played any of them. So it was a treat this year to hear Benjamin Zander and the Boston Philharmonic in a riveting performance of Harbison’s compelling and original Third Symphony."

BPYO's performance of Wagner, Tchaikovsky, and Prokofiev chosen by ArtsFuse as one of Top 10 Classical Concerts of 2017 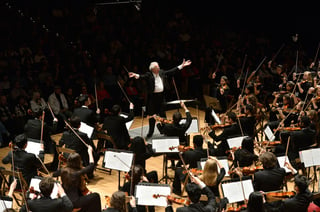 "The BPYO’s November concert at Symphony Hall...was, to be succinct, magnificent. There was dazzling Wagner, a riveting suite from Prokofiev’s Romeo and Juliet, and George Li...playing the daylights out of Tchaikovsky’s Piano Concerto no. 1. Forget the fact that this is an orchestra made up of kids aged 12 to 20; they’re one of the finest ensembles in the country, period."

"The BPO gave us something in many ways remarkable: for its near-perfect precision, worthy of the best of world-famous orchestras; for the resonance of sound that filled the hall and regularly achieved fff in the most triumphant manner but was not even once too loud; for the fine blend of brass that never overpowered the rest of the ensemble (from my vantage point in the balcony, this was ideal); for the clear demonstration that in Bruckner the dramatic element is invariably subsumed to the lyrical. There is mystery (“Feierlich. Misterioso”), there is mysticism, there is Catholic piety, there is other-worldly strangeness: all evolve from the shade of Schubert no less than from Wagner...Boston can take unequivocal pride in such a good orchestra, so well led by one who gives this difficult music the understanding it deserves." Read the entire article→ 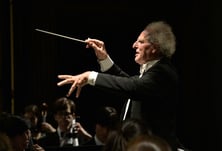 “(This recording) is one of the most successful entries in (Zander’s) almost-complete Mahler symphony cycle. Recorded in April in the warm acoustics of Symphony Hall, Boston, this performance...conveys considerable visceral impact and energy.” Read the entire review→

"From the level of accomplishment, it’s hard to believe this orchestra is made up of young musicians, ages 12 to 21, many of them no doubt playing this formidable masterwork for the first time. But the joy of discovery is palpable in every nook and cranny of this exciting performance under the insightful direction of Benjamin Zander, recorded live at Symphony Hall last spring." Read the entire article→

And finally, this astonishing review of the BPYO’s recording of the Mahler’s 6th Symphony. 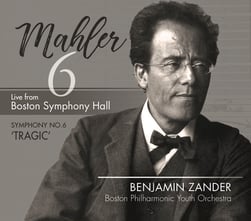 “This beautifully packaged 2 CD set is without doubt, the most exhilarating recording of Gustav Mahler's deeply moving Symphony No. 6 (Tragic) I have ever heard - on several levels. The Boston Philharmonic Youth Orchestra and its extraordinary conductor, Benjamin Zander, offer a live recording from Boston's historic Symphony Hall that is nothing less than perfection. The Symphony's sprawling four movements - a monumental test of endurance and musicianship - sparkle with energy from first note to last. Consistently superb intonation, nuanced phrasing, extraordinary sectional and solo playing, and an electrifying urgency of intellectual purpose and message, drive the imagination and nurture the soul - a recording to cherish, extol, and pass along to others.

The sound capture on this recording is equally gratifying. Little wonder, these are the same engineers responsible for the Boston Symphony's last two Grammy-winning triumphs. Minuscule detail - the famous sound of distant cowbells, the tinkle of a triangle - can be discerned with pristine clarity, while Mahler's gigantic orchestral climaxes are allowed full-throated sonic resonance.

A performance of such exquisite beauty and profound depth is no accident. Maestro Zander is one of the world's great Mahler interpreters and the incredible musicians of the Boston Philharmonic Youth Orchestra attend to his vision willingly and with spirit in this recording. The result; a vividly colorful narrative of the human condition that explores the composer's complex psyche and illuminates the tender mercies and bittersweet longings of Mahler's inner world."

Great music, heard live, with many other people, can provide the solace, spiritual uplift, and joyous community that we all crave - perhaps none more so than Elgar’s sublime Dream of Gerontius (BPO, April 20th) or Mahler’s 9th Symphony (BPYO, March 11th). We hope that you will join us for all the music we offer – it is our way of bringing some light where otherwise there is too much darkness.