The ruins of the Temple of Apollo at Delphi.

“We are all Greeks,” Percy Bysshe Shelley wrote in the preface to his 1822 verse drama Helles. “Our laws, our literature, our religion, our arts have their root in Greece.” You have to work a bit to escape that impression pretty much everywhere in this country, but perhaps nowhere more so than here in Delphi.

It’s all a bit ironic, actually. The town itself is the most unprepossessing place imaginable: beautiful (quaint, even) and nestled high in the hills on the way up to the peak of Mount Parnassus. To the ancients this spot was nothing less than the center of the world, home to the Pythia, the Oracle of Apollo, who was the god of the sun, light, music, poetry, art, archery – you name it. Accordingly, Delphi turns up often in Greek history (Themistocles consulted the Oracle for guidance prior to the Battle of Salamis in 480 B.C.) as well as in mythology and philosophy (she – the Oracle was always a woman – is mentioned in the writings of Aeschylus, Aristotle, Herodotus, Ovid, Plutarch, Sophocles, and Xenophon, among many others).

So Delphi is, for our shared history of Western civilization, a pretty significant place. And now the BPYO’s here. 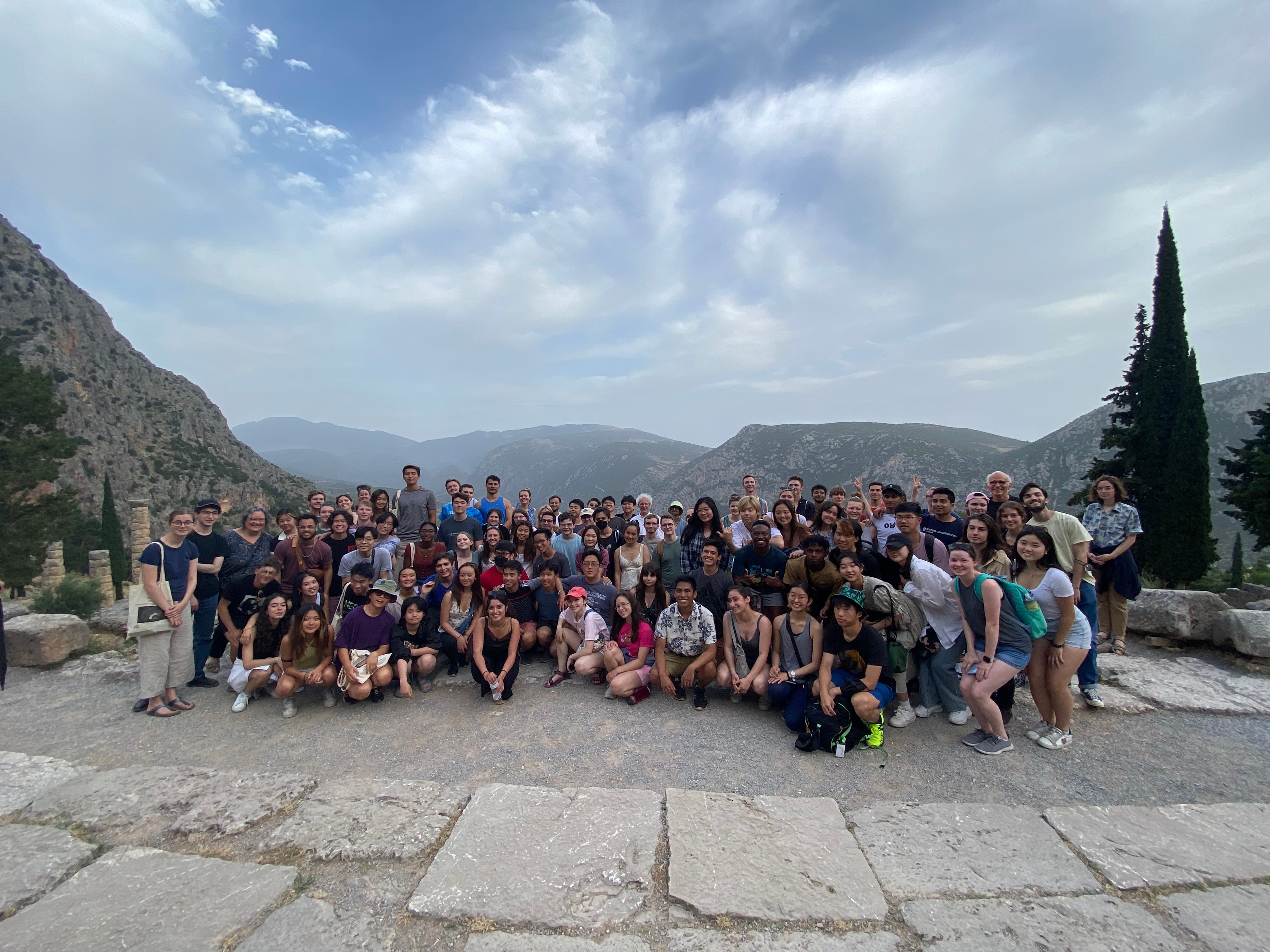 We arrived on Thursday afternoon, following a moderately lengthy drive from Ioannina. The journey south and east included a stop for lunch in Lepanto, a charming-looking town on the Gulf of Corinth that, I later discovered, was the intended target of an attack, during the Greek war of independence in the 1820s, to be led by the poet George Gordon, Lord Byron. Alas, fate intervened and Byron died in Missolonghi shortly before he got the chance to take his army into the field. At any rate, it was a fun bit of trivia to pick up and, for several of us, the meals and the short interactions we had there with locals were among the non-musical highlights of the last two weeks.

Our first evening in Delphi was given over to a guided tour of the ruins of the Temple of Apollo, where, in olden times, the Pythia made her pronouncements. The views from the heights, especially in the evening, are spectacular – mountains all around, the Gulf of Corinth in the distance, valleys filled with olive trees and cypresses: the ancient Greeks really knew how to pick a spot. After that, we decamped to town for an outdoor dinner and then had a relaxed rest of the evening. 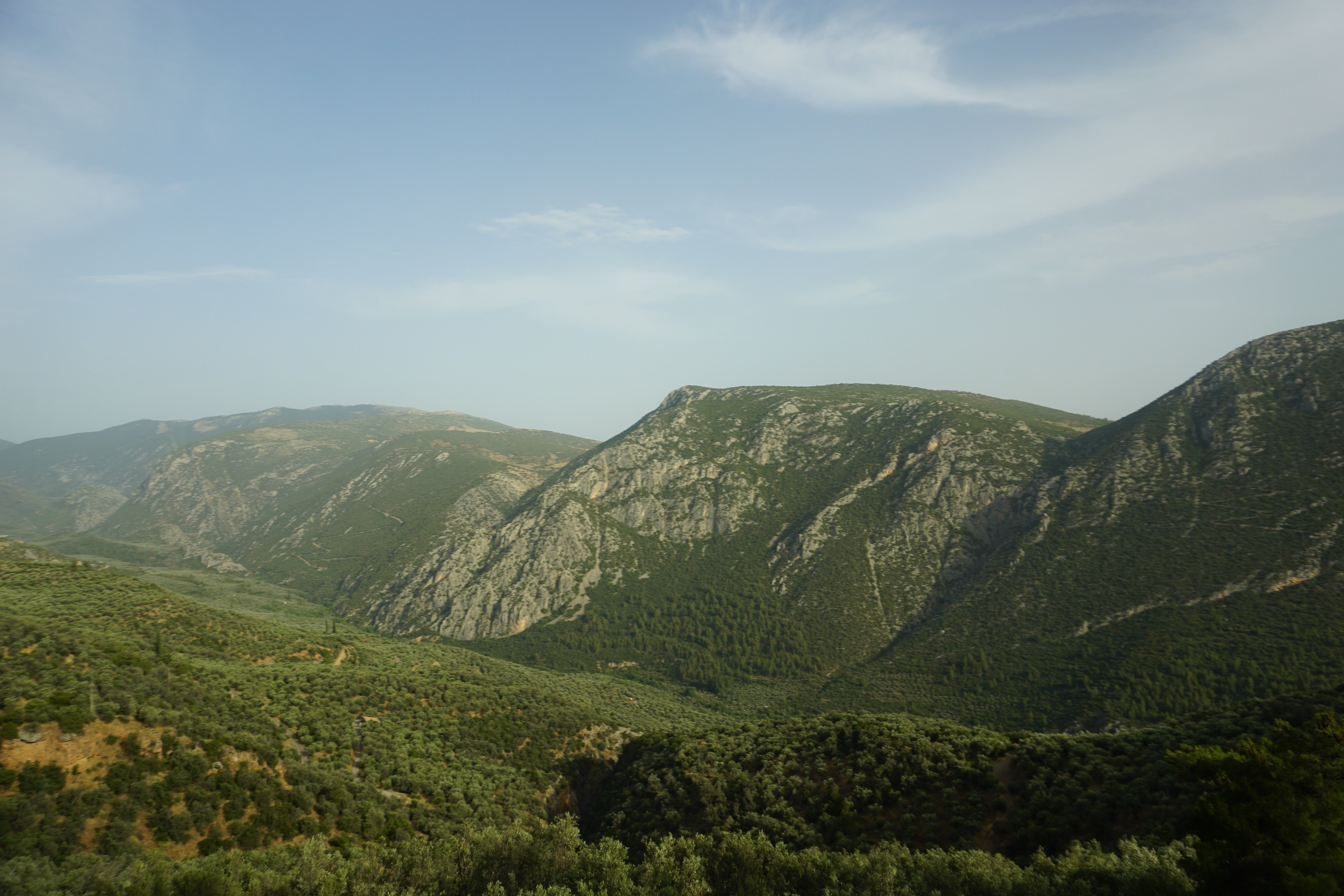 A valley of olive and cypress trees beneath Delphi.

The next day, we were free to explore Delphi and shop (for those so inclined), swim, or otherwise unwind before we had a final tour meeting and then headed out for the night’s concert. 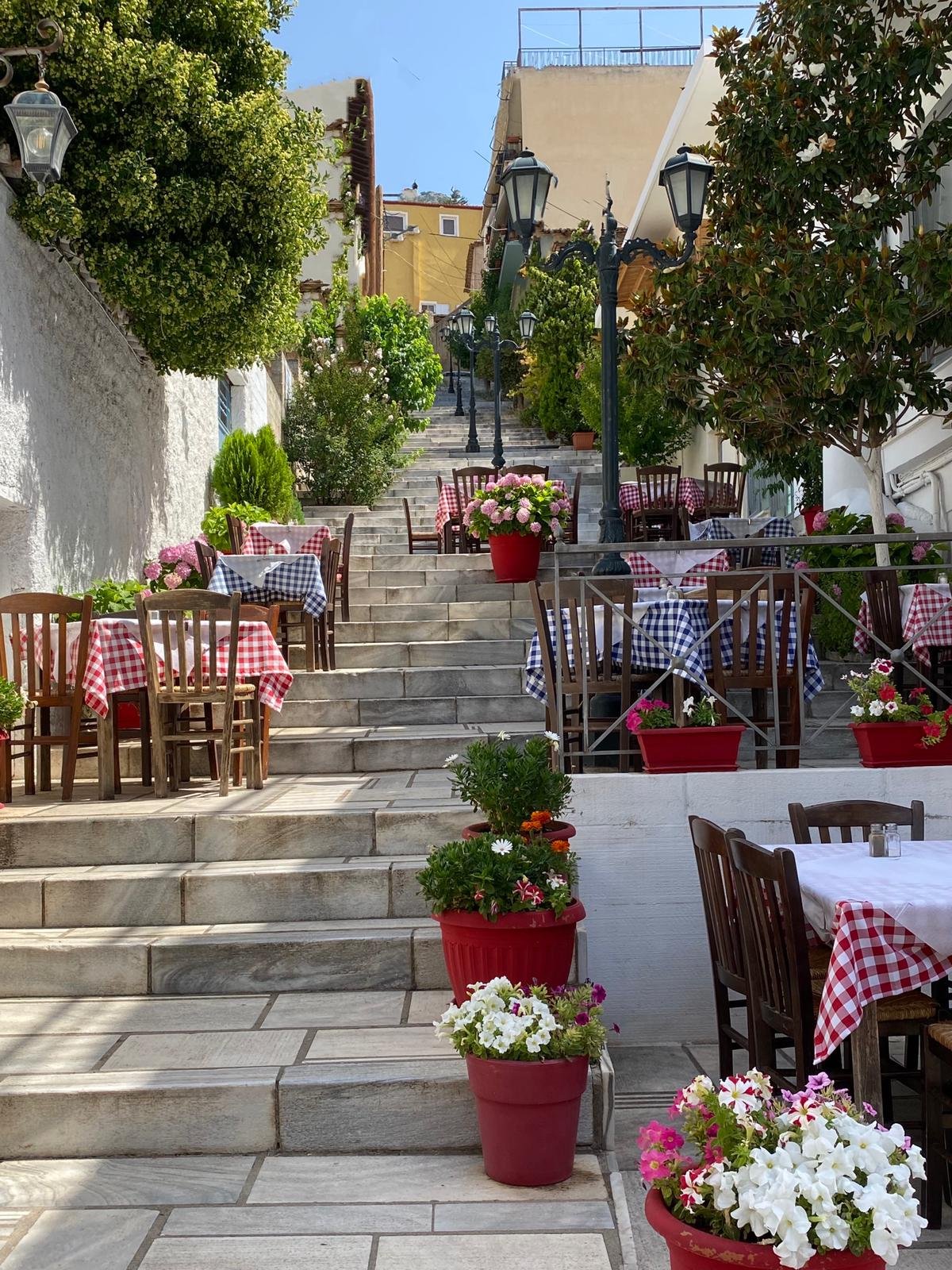 A side street in Delphi.

Friday’s performance reprised, for one last time, the BPYO’s Mahler program. This is such a wonderful selection of pieces – Shostakovich’s Festive Overture, Tchaikovsky’s Rococo Variations, and, of course, Mahler’s Symphony No. 4 – and, given the location’s ties to Apollo, the patron of music, thoroughly apropos for our current spot. What’s more, the BPYO’s concert was part of this year’s Delphi Festival: the orchestra was the first international ensemble to appear at the Frynihos Open Air Theater this summer.

A modern take on the ancient amphitheater, the venue was situated just down the hill from our hotel. Surrounded by mountains and offering a stunning view of the valley below, it ended up being, of all our outdoor concert settings thus far, the most acoustically satisfying. It was also the tour’s most intimate: the seats enveloped the stage almost as far back as the woodwind section. The setup was such that it appeared the audience was embracing the players.

Perhaps as a result, this most intricate of orchestral programs – at least as far as the two big pieces were concerned – really sounded like symphonic chamber music. 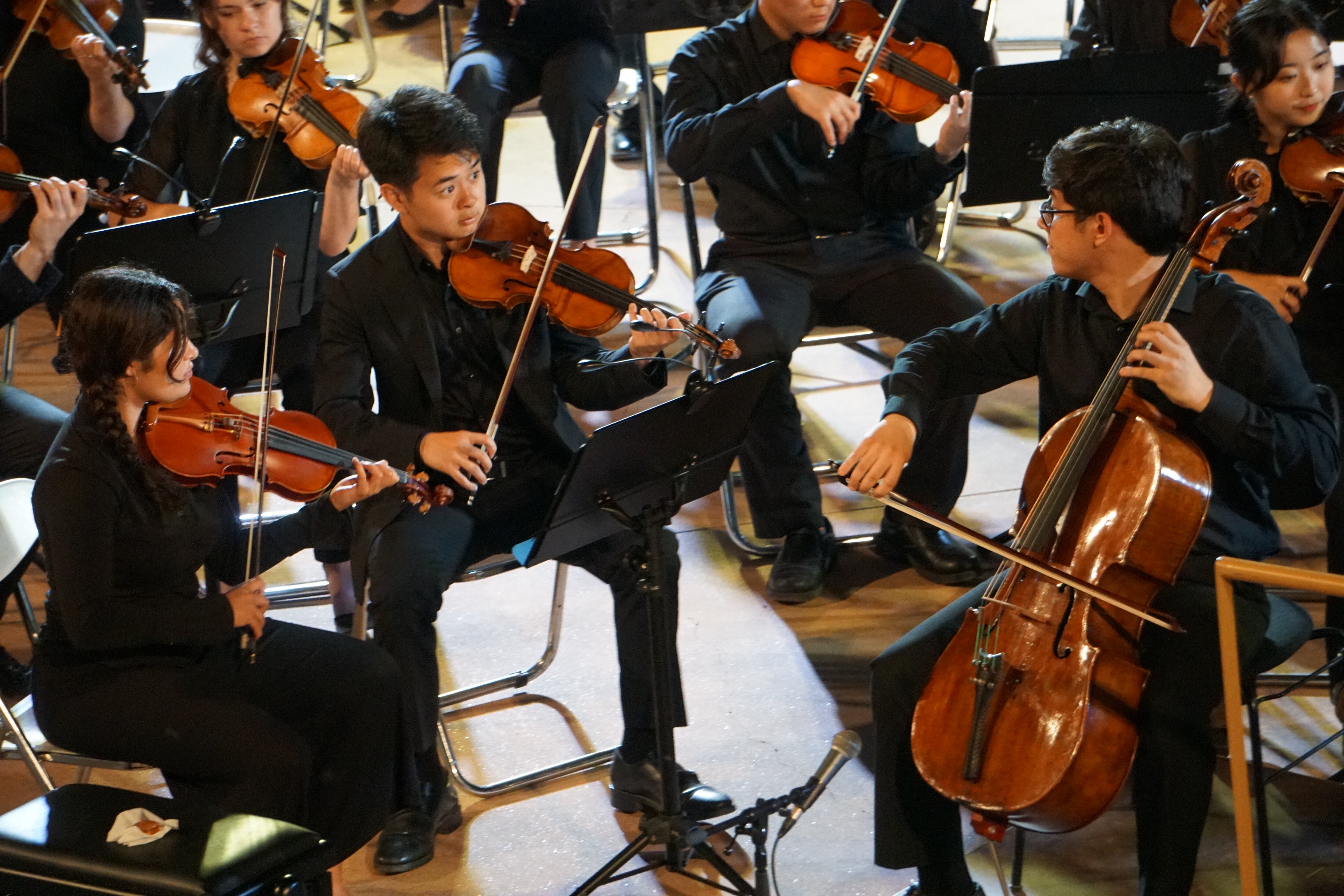 In the Tchaikovsky, the music’s play of color and character danced. Maybe it had to do, in part, with the magic of the place, but the music’s singing lines, whether in the solo part or orchestra, seemed to take on a conspicuously luminous sheen. The spirited moments – like the nimble scalar runs in Variation No. 2 and the vigorous trills in No. 6 – popped.

Throughout, cellist Zlatomir Fung and the BPYO really seemed to be having a lot of fun with the piece. The only other cellist I’ve seen who so regularly interacts, visually and physically, with an orchestra is, of course, Yo-Yo Ma. Zlatomir’s playing has exhibited a Ma-esque generosity all tour – but nowhere more than in Friday’s Tchaikovsky. His example was contagious: suffice it to say, when you’ve got the back-stand second violinists moving with the same sort of vigor and purpose as the soloist, something’s going very right.

That same quality of engagement also marked the ensemble’s reading of the Mahler. There was a bittersweet aspect to this performance: during the season lost to the pandemic, Benjamin Zander led perhaps half of the BPYO’s current membership in an online deep-dive into the work in which they explored it from all angles – musical, poetic, philosophical, interpretive. Friday was their final go-around with the piece.

Now, to go from Zoom to Delphi is quite the leap. I can only imagine what the kids who’d invested two years of their lives in this piece were thinking as they played it. Whatever was on their minds, what came across to the night’s capacity audience was a reading of terrific freedom and flexibility, as well as of big extremes of dynamics and intensity. 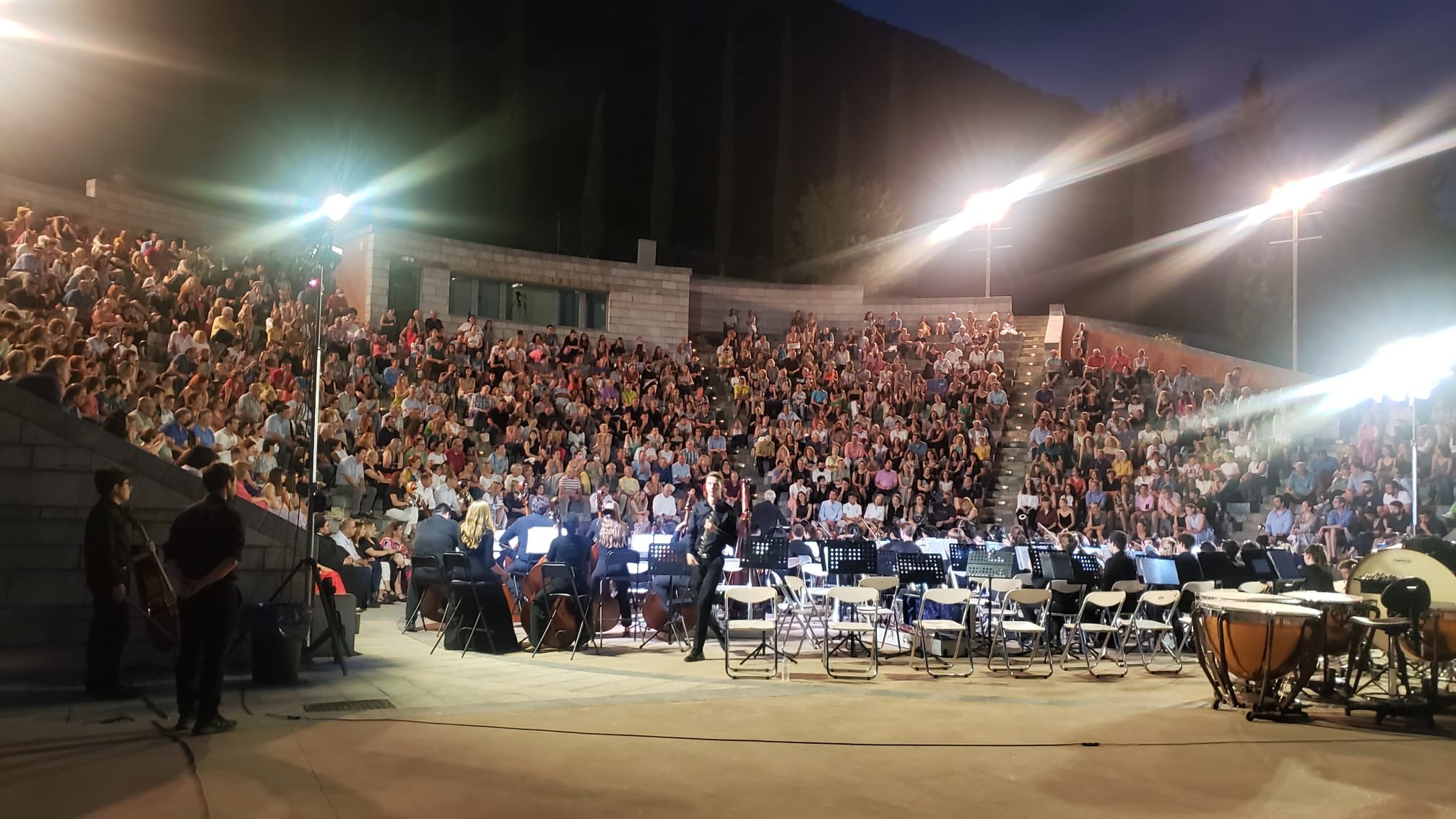 During a tour meeting on Wednesday night in Ioannina, concertmaster Eric Chen had encouraged his colleagues in the orchestra to take risks with their playing in this concert and to hold nothing back. They took his request – as well as Ben Zander’s admonition to not settle for playing in one’s comfort zone – at face value.

The first movement was rhythmically crisp, full of unified attacks and articulations, and boldly shaped. Its development section, in particular, came out forcefully. Eric’s solos in the second movement were, as usual, brilliantly characterful, but equally striking was this performance’s lucidity: the delicacy of the music’s textures, the intricacy of its counterpoint, and the discreet exchanges between instruments all spoke fervently.

So did the soaring melodic writing in the third movement. Here, as in the prior section, the music’s rootedness in dance was compelling: yes, the principle lines sing – but they have to move in just such a way to come to life. This they did, whether hushed and hypnotic over the opening, hymn-like theme or flowing across the later variations.

As in her prior two tour appearances with the BPYO, Sofia Fomina’s account of the Mahler’s finale on Friday was enchanting: pitch-perfect in terms of notes, shaping, character. It’s exactly the sort of thing one would like to be able to capture in a bottle. A pair of encores later – the “Song of the Moon” from Rusalka and Elgar’s “Nimrod” – and that was it. 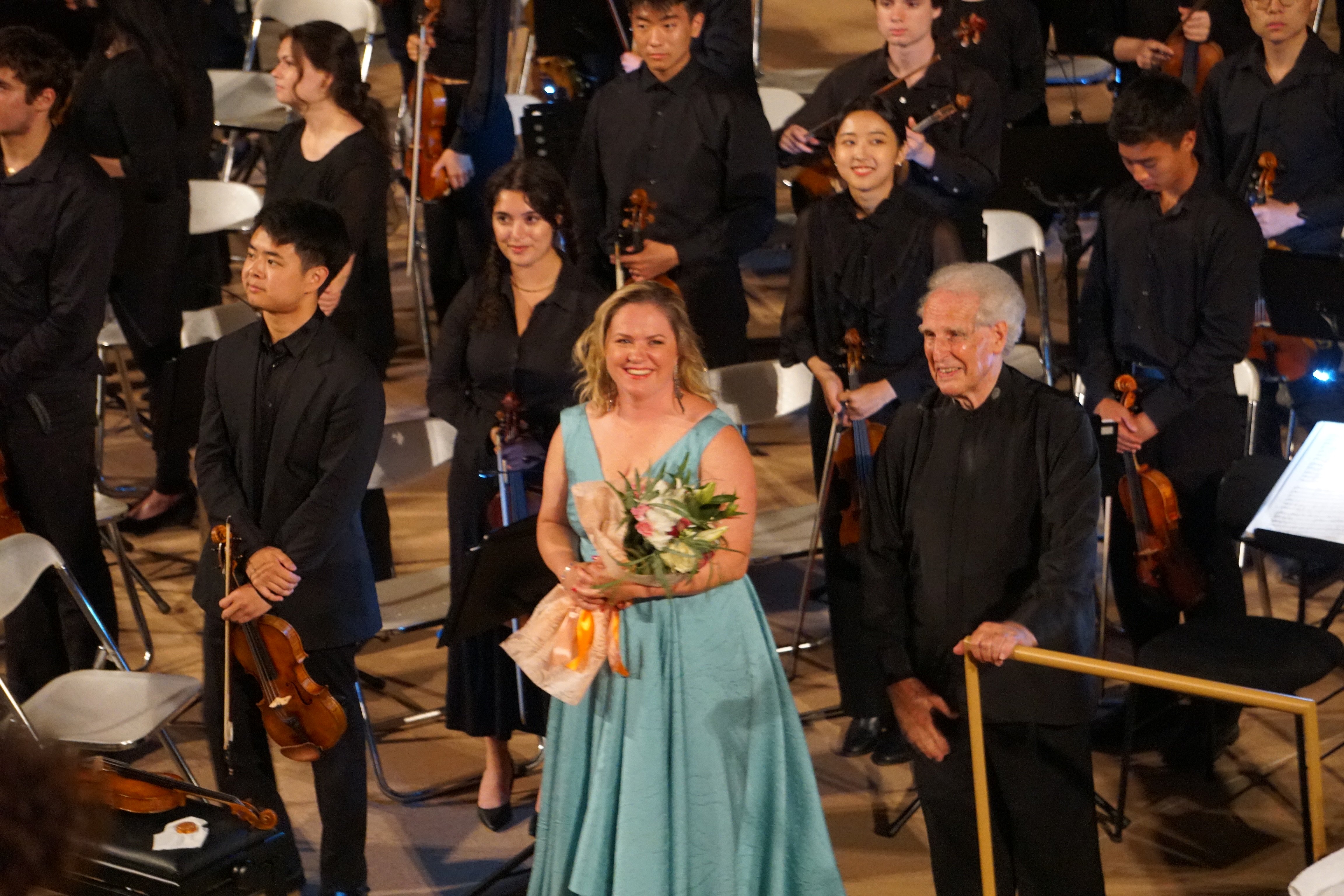 Sofia Fomina and Benjamin Zander taking bows after performing Mahler’s Symphony No. 4 on Friday in Delphi.

To spend any time on one of these tours with Ben Zander means to talk much about themes of possibility and transformation. Earlier in the day, Ben had spoken to the orchestra about transformative behavior as being a type that lives in the moment yet is firmly intentional and doesn’t settle for ease or familiarity. That can be as simple as stepping outside of one’s comfort zone to talk in front of a group – or as complex as trusting in a hundred other people to deliver some riveting Mahler.

On Friday, the BPYO managed the latter; individually, there was probably a bit of the former involved, too: for the second half of the concert, the stage lights were shut off because the theater was so thick with insects. Afterwards, I spoke with several players who, because of the lack of light and the unfamiliar acoustic, had trouble easily seeing the podium and hearing across the ensemble. 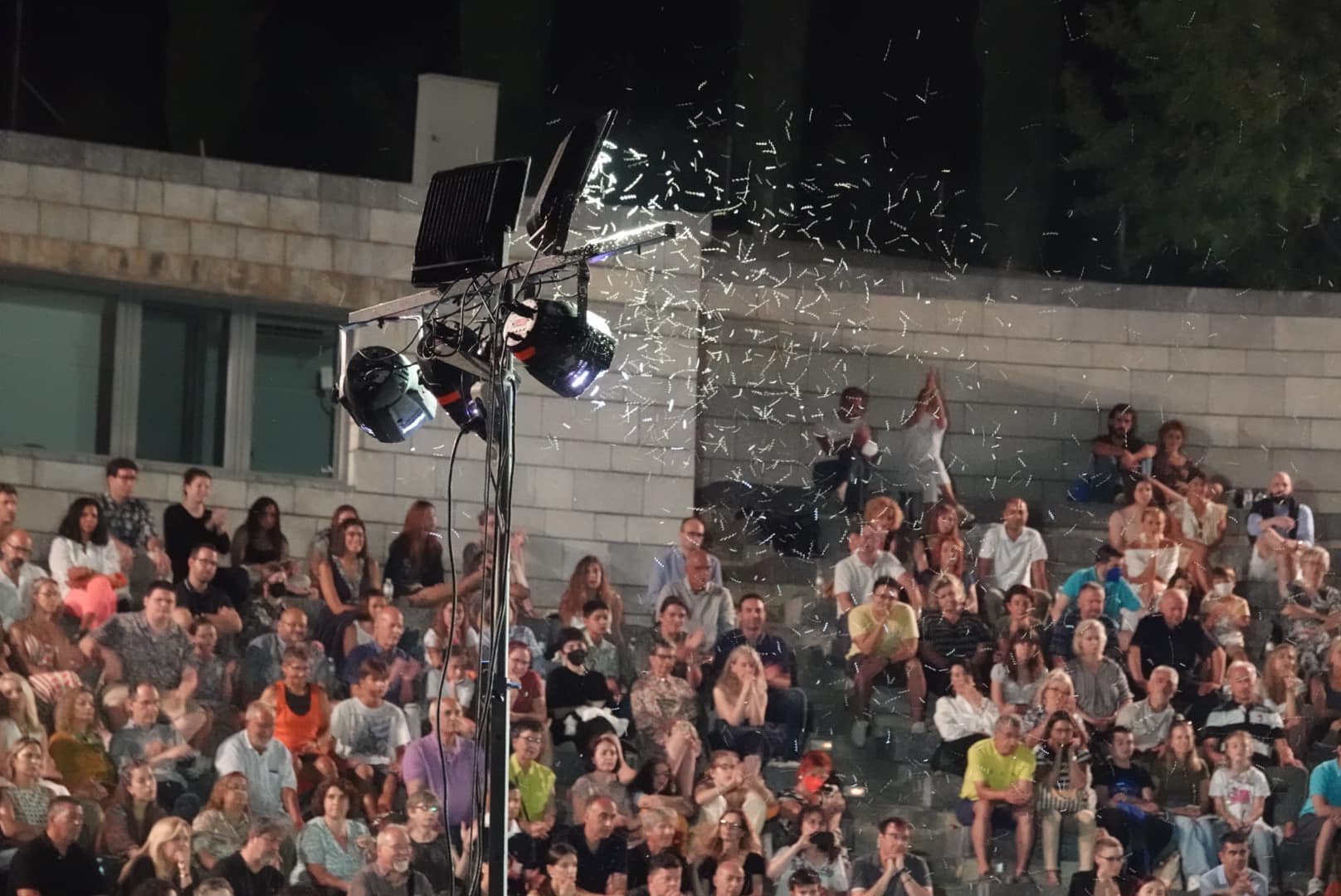 Lights and bugs in Delphi.

Despite such obstacles, the piece – and the whole concert – came off powerfully. To call the experience transformative is, I think, accurate. The audience’s response to the BPYO was ecstatic. And, the next morning, after another midnight dinner and a night of little sleep, there was an electric charge still coursing through the group as we prepared to depart for the final stop on our itinerary, Patras. That hadn’t happened, at least not quite to this degree, yet on the trip. 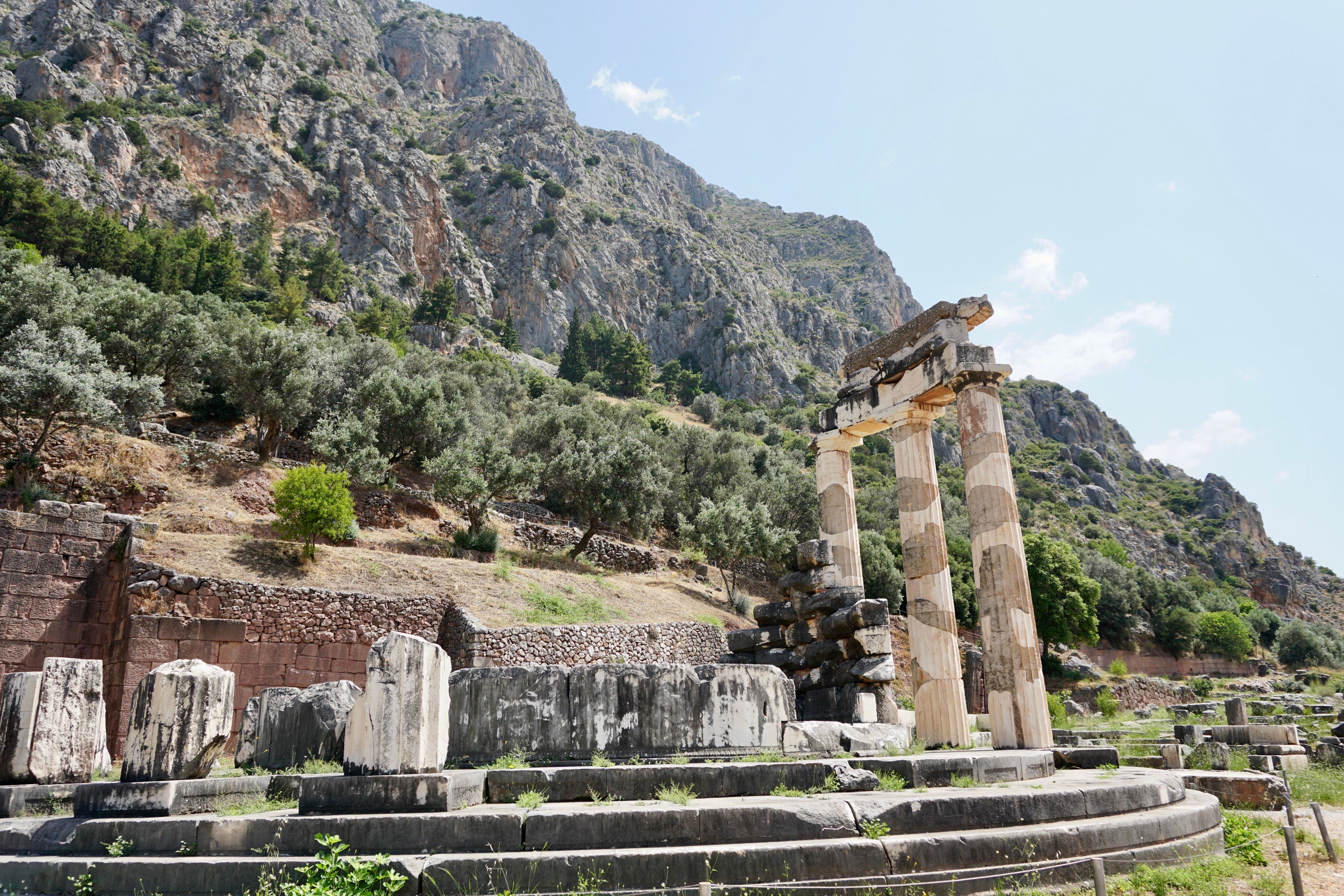 The ruins of the Temple of Athena in Delphi.