After a relatively light first two days in Greece, filled with time for rest and a slightly more touristy itinerary than usual, the BPYO got down to business on Wednesday.

The morning began with a rehearsal in the orchestra’s Athens performance venue, the Concert Hall Christos Lambrakis at the city’s Megaron. Located just across the street from the United States’ Greek embassy, the Megaron complex takes up roughly a city block. And, though it’s façade recalls Lincoln Center’s Geffen Hall a bit, the space boasts measurably better acoustics. (The exterior is superior, too, surrounded by a park lined with orange trees. Alas, they’re chemically treated by the city so people don’t pick the fruit. Still, they lend the area a certain charm.) 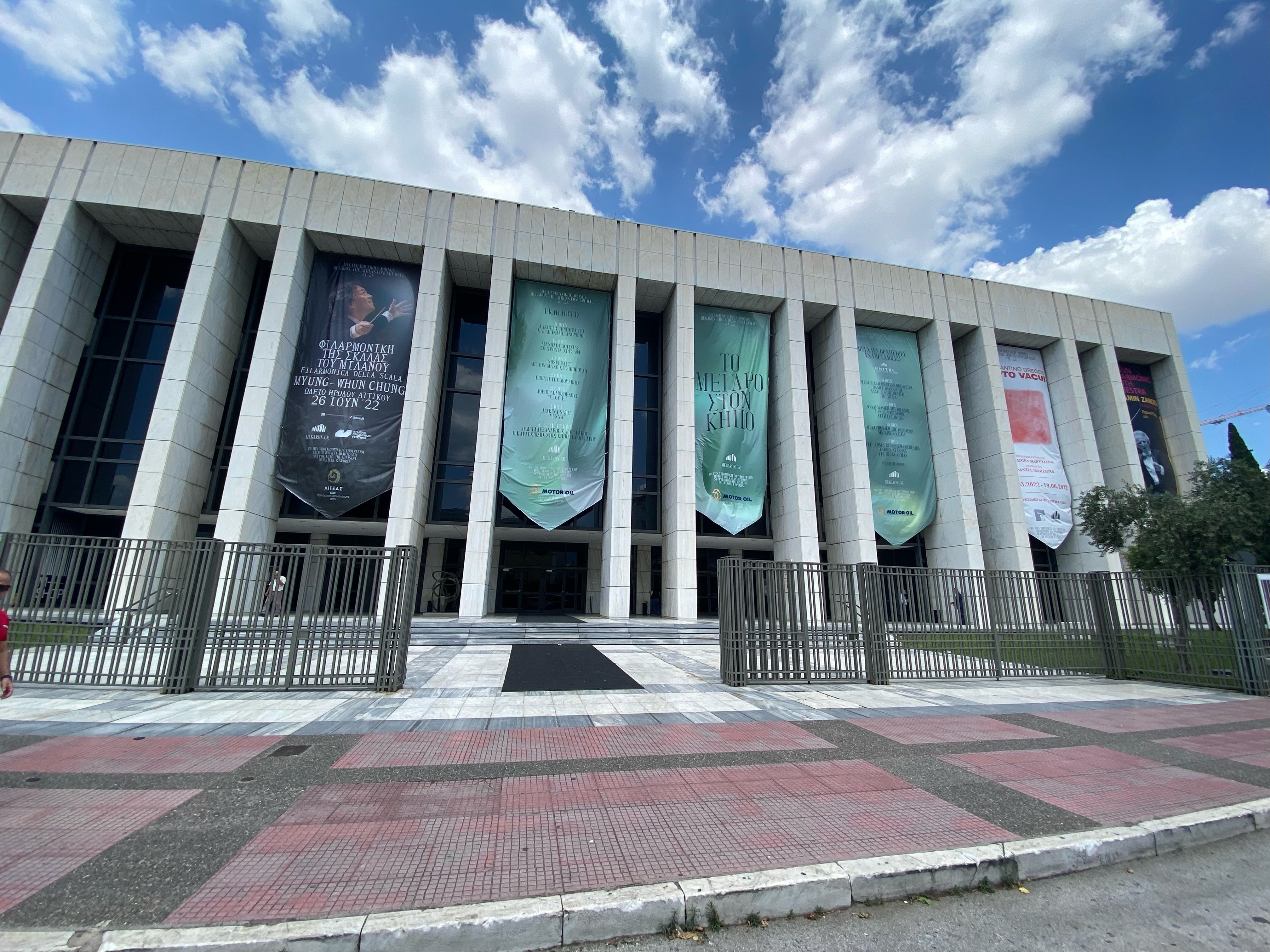 The exterior of the Athens Megaron.

The hall’s audile excellence was clear from the downbeat of Wednesday’s rehearsal, which opened (as all BPYO first tour rehearsals do) with a run-through of “Nimrod” from Edward Elgar’s Enigma Variations. After that, the orchestra made its way through the night’s lineup, a reprise of their February concert: Maurice Ravel’s La valse, Elgar’s Cello Concerto, and Dmitri Shostakovich’s Symphony No. 5.

As those who heard that concert at Symphony Hall (or know all the pieces) are well aware, that’s a heavy-duty program – and a long one. So it was perhaps optimistic of Benjamin Zander to spend four hours rehearsing the entire thing with the BPYO not long before they were due to perform it (and late into the night, at that).

Then again, he knows his players very well. It was striking just how natural the orchestra sounded from the get-go on Wednesday. Their playing certainly reflected a comfortability with one another that’s developed over the course of a season (the same was also true at the side-by-side Tuesday night). But there was a purposefulness to it, as well, as though the players were, individually and collectively, doing just the thing they’re meant to be doing.

The space added to the experience. As at Symphony Hall, there’s no place to hide in the Megaron: the sound was amazingly clean and, in a rehearsal without an audience, had a bit of a bright edge to it. Accordingly, the Ravel took some time to settle. The Elgar did, too, but once the BPYO got its bearings and began to lock in to soloist Zlatomir Fung’s tone, everything started to fall into place. By the time they got to the Shostakovich, all that was needed was some fine tuning. 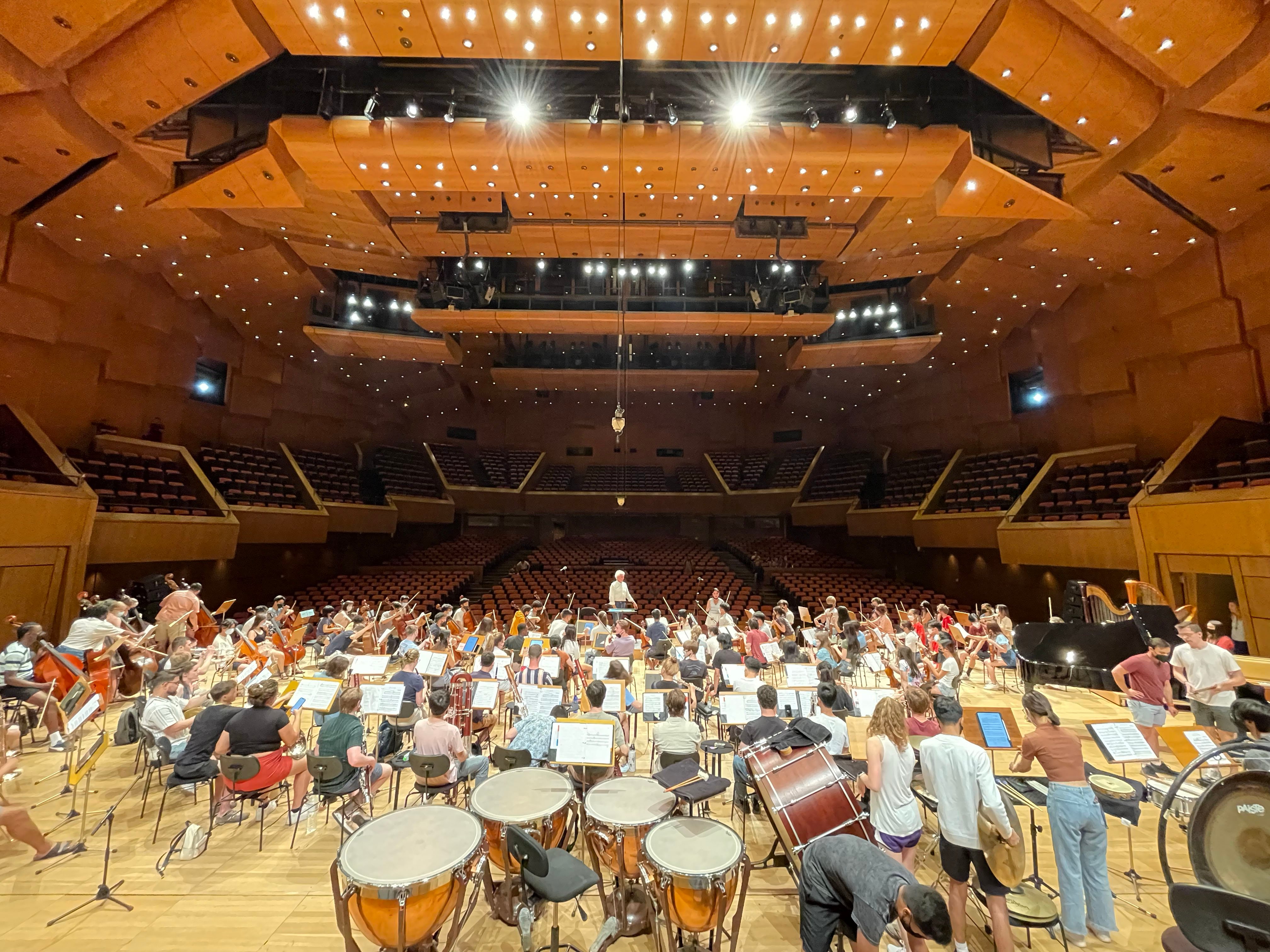 The BPYO and music director Benjamin Zander rehearsing inside the Concert Hall Christos Lambrakis in Athens.

Afterwards, we headed into the neighborhood to find a late lunch (the rehearsal, which was scheduled to end at 1 instead let out after 2, thanks to a delayed start brought about by our busses being stuck in Athens’ horrible traffic). Then it was back to the hotel to rest up for the night’s performance.

I’m not sure anyone in our group will truly embrace these 9 p.m. concert start times. Certainly they’re not ideal on a draining two-week-long tour (especially when dinner is slated to come afterwards). However, the late hour didn’t deter a large audience from turning out for this inaugural concert of the trip. Before coming to Greece, there’d been some concern about filling our first two venues, both of which are traditional halls; Greeks evidently don’t usually do indoor concerts after the end of May. The issue proved moot in Athens, though: if the house wasn’t standing room only, it was very full.

As for the BPYO’s performance, let’s just say that there are good first tour concerts and there are good concerts. Sometimes the two don’t meet. On Wednesday, however, they did.

The Ravel, which is such a formidably difficult piece just to pull off, came over strongly and with some wonderful subtleties thrown in: silky violins over the first, sumptuous dancing refrain; beautifully dovetailed woodwind lines in the middle; and a visceral, terrifying disintegration at the end.

Then there was the Elgar. Wednesday was the third time I’d gotten to hear Zlatomir play the piece in the last seven months; the first was last November when he performed it with Symphony Pro Musica and BPYO senior advisor Mark Churchill on the podium in Worcester’s Mechanics Hall. That time, I was dazzled by his mature command of the music, in particular his grasp of its alternations of light and shadow, playfulness and sadness. 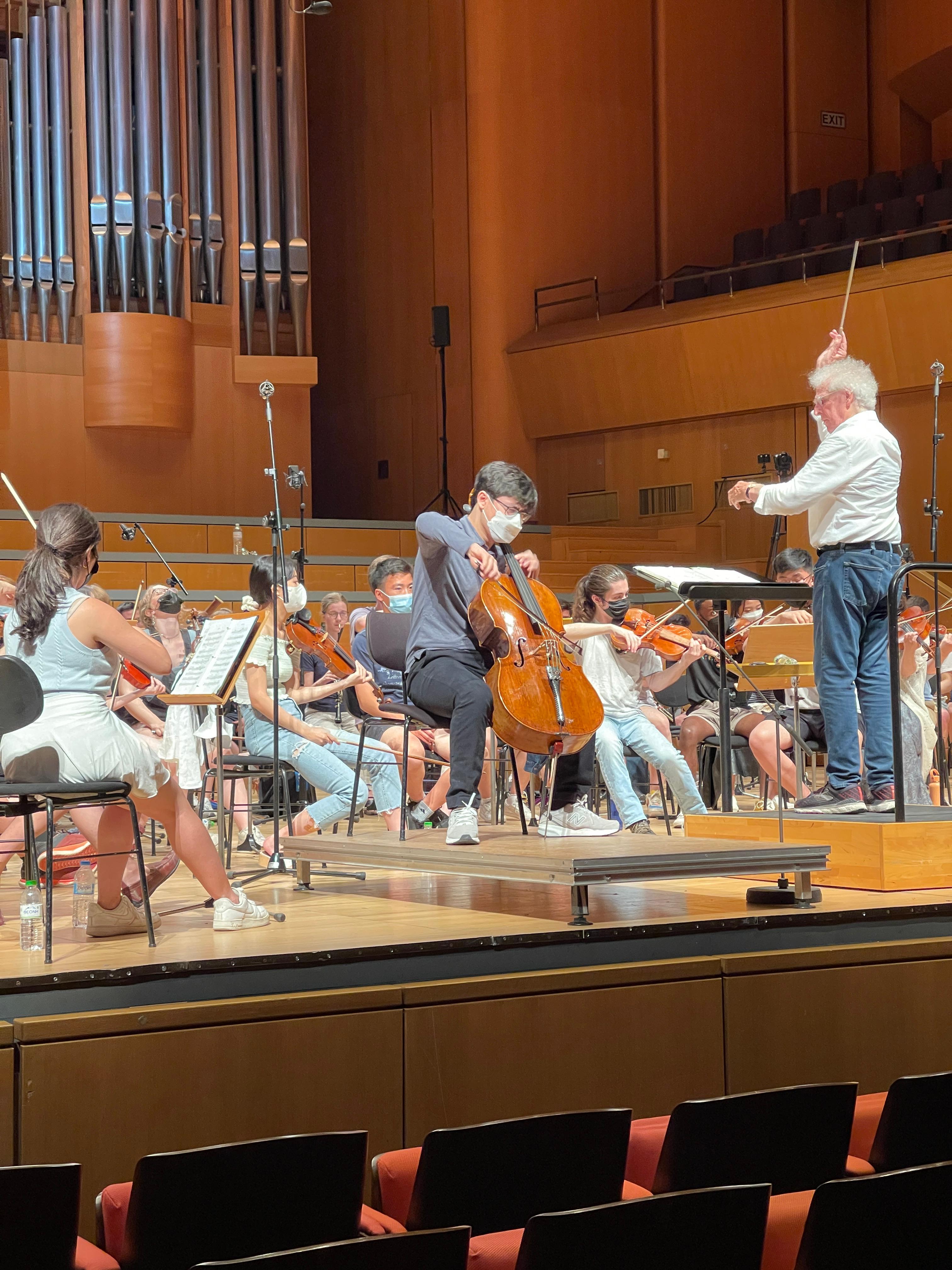 All of that was evident again on Wednesday: Zlatomir had the notes and the music’s technical demands easily in hand. Yet, interpretively, his latest traversal of the piece inhabited an entirely different plane, its highs more thrilling, depths more profound. His engagement with the music was total, its dynamic extremes all smartly terraced, articulations carefully etched, phrasings enticingly flexible and, often enough, sounding entirely spontaneous. This was, from a soloistic perspective, a performance at the highest level.

But the piece isn’t just a showcase for the cello: there’s an orchestral part that’s maybe not so flashy, but it’s equally important and sophisticated, not just a humdrum accompaniment. If a performance of the Elgar is going to click, soloist and ensemble need to be perfectly in sync – but nothing can sound forced or feel prepared. It’s an incredibly tricky balance to manage.

Yet, by and large, that’s what happened on Wednesday. Tonally, expressively, dynamically, this was a brilliantly sympathetic reading. From my seat, the solo cello had no trouble projecting over the orchestra, but it was also affectingly cushioned – and sometimes enfolded – in the orchestra’s sound. Though Zlatomir and the BPYO intuited one another with remarkable unanimity, there was always room for individual sections to shine: violas in the first movement, woodwinds in the scherzo, and so on.

It was a truly wonderful performance (followed by a cheeky Prokofiev encore) and it might have been the night’s highlight had events not intervened before the start of the Shostakovich. During his introductory remarks on the piece, Ben Zander was interrupted by a heckler (we were later told she was a member of the Greek Communist party), who shouted for him to cease his “propaganda,” which, at that moment consisted of a recitation of the historical record of Shostakovich’s relationship with Stalin. The rest of the house responded with boos, hisses, and calls for the dissident to leave; as she and a companion were escorted out, the crowd burst into applause. Ben was unfazed, finished up what he had to say, and later wove the experience into his comments before the BPYO’s “Nimrod” encore.

The interruption seemed to both unsettle and galvanize the orchestra. Certainly, such outbursts aren’t the norm in Boston and, if the Moderato felt a tad unfocused (Eric Chen, the orchestra’s concertmaster, mentioned afterwards how he’d been disturbed by the incident and had trouble concentrating during this first movement as a result) that was completely understandable; regardless, it still spoke mightily. From there, though, things proceeded to go from strength to strength. The second stomped brutally. The Largo’s extremes – breathtakingly fragile one moment, furiously intense the next – were gripping, the xylophone line at its apex bitingly fierce as anything. The finale’s climaxes raged.

As in February, this was a Shostakovich Fifth steeped in purpose, though now everything felt distinctly personal. Cellist Jonathan Colon told me later that he’d found the cumulative experience – of being in Greece, at the Megaron, playing this music, and hearing audience’s engagement with it all (before and after) – to be transformative: no easy crier, he was moved to tears over the Shostakovich’s closing pages.

He wasn’t the only one touched and invigorated by the goings on, as became evident in many discussions that unfolded during our midnight dinner. Ben praised the group for its professionalism and dignity in the heat of the moment before we decamped to the hotel for the remainder of our last night in Athens. On Thursday, the BPYO heads to Thessaloniki with a new program in a different venue. Who knows what revelations and reactions might result from that performance? We shall find out.

BPYO music director Benjamin Zander meeting with members of the audience after the orchestra’s Athens debut.