As most BPYO followers know, all of the orchestra’s trips thus far have been labeled “tour[s] of possibility” (after the overarching philosophy put forth in Rosamund Stone Zander’s and Benjamin Zander’s The Art of Possibility). This one, though, is also shaping up to be something I might call a “tour of serendipity.”


Case in point: despite all the obstacles thrown up by flight delays before we left Boston (the group taking Delta departed two hours late and the one on Lufthansa was initially told they’d miss their connection in Munich and needed to be rebooked on no less than five different flights), getting to Athens actually went smoothly. The former party arrived just one hour behind schedule and the latter, miracle of miracles, made their original connection. By late Monday afternoon, everybody (plus – even more amazingly – all of our stuff) was ensconced in the Titania Hotel in downtown Athens.


If that weren’t enough, the heat wave that had been forecast to turn Athens into one of the Circles of Hell this week was downgraded. A small thing, perhaps, but welcome: our time in the Greek capital should feel summery, but not excessively sweltering.

The last was especially agreeable since we spent a good part of Tuesday out and about in the city.

Athens is a singular place. Ruggedly beautiful, the landscape recalls parts of the American West and Southwest, particularly California, with hills and mountains that look rather hardscrabble and brown. The city, itself, though, is dotted with trees and other greenery: flowering trees, some palm trees, orange trees, pines, countless olive trees. They provide a welcome lushness and color to the surroundings. Also, some shade. 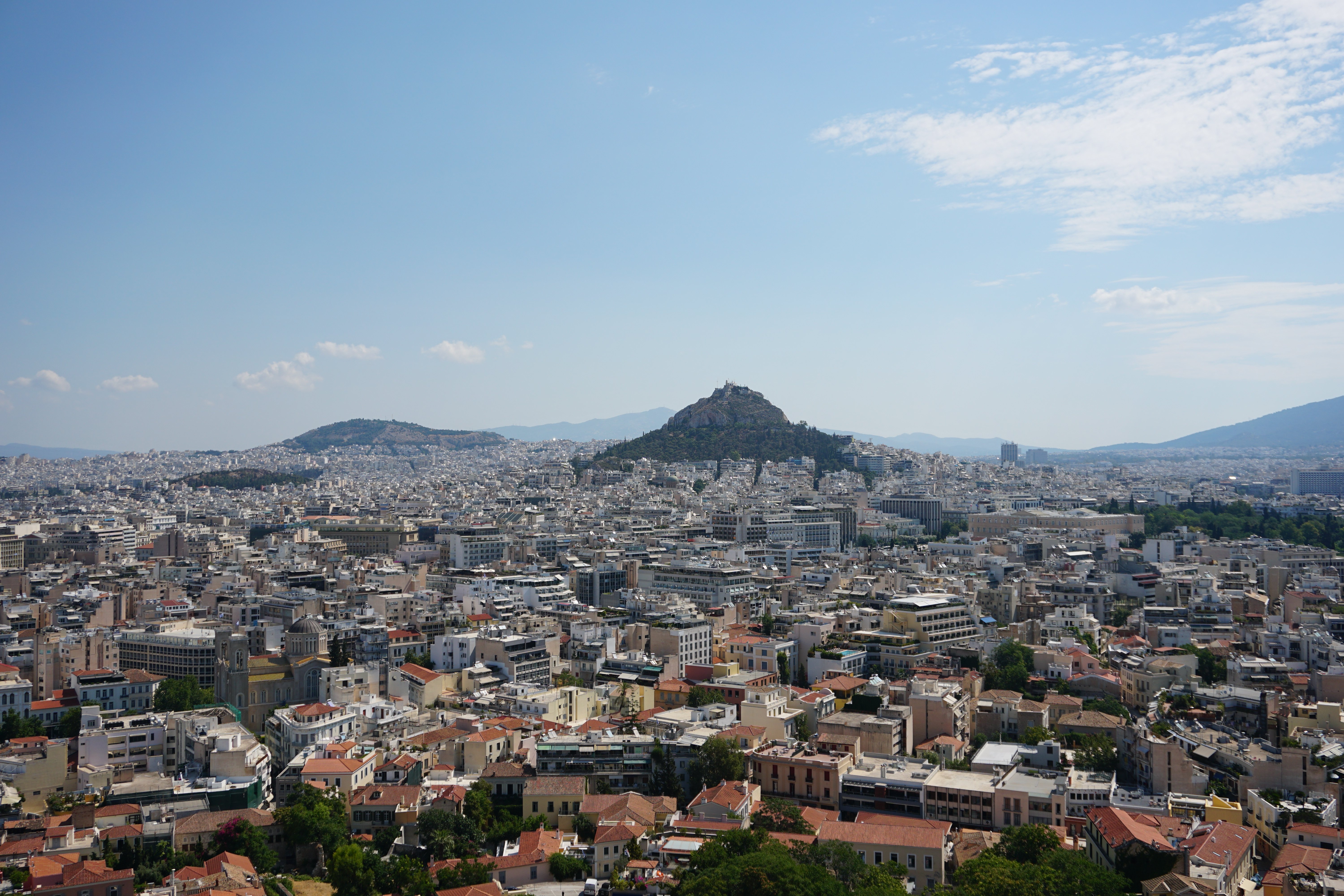 Part of Athens, as seen from the Acropolis.

The layout of the place might be the definition of urban sprawl. Around 3 million people live in Athens, proper, but there are no skyscrapers or buildings of any significant height. Rather, everything’s spread out over the surrounding hills and valleys. In its expansiveness, then, Athens is a bit redolent of Rio de Janeiro.

As is well known, the architecture here is unparalleled. While some of Athens’ structures hail from ancient times and some are just very old, other buildings date from the 19th century and there are plenty of more recent vintage, too. Up close, rolling hills and narrow streets recall Montmartre or some hidden neighborhoods you might discover going off-path somewhere like Prague. But the larger impression the place leaves is more Middle Eastern or North African in character and color than anything else.

Truly, there are few cities like Athens and Tuesday’s outing provided us a nice snapshot of at least a little bit of it.

After a late dinner and an even later tour meeting Monday night, everybody evidently slept well. Breakfast was lively (the hotel’s restaurant is on the roof, which provides a stirring view of the city, and is itself pretty invigorating). Our bus ride to the Acropolis, too, was engaging: we passed by various sights, including Hadrian’s Arch (a 2nd century A.D. remnant from Roman times), the sprawling National Gardens, and the Olympic Stadium from the 1896 Games (these days it’s used as the end point of the Athens Marathon). 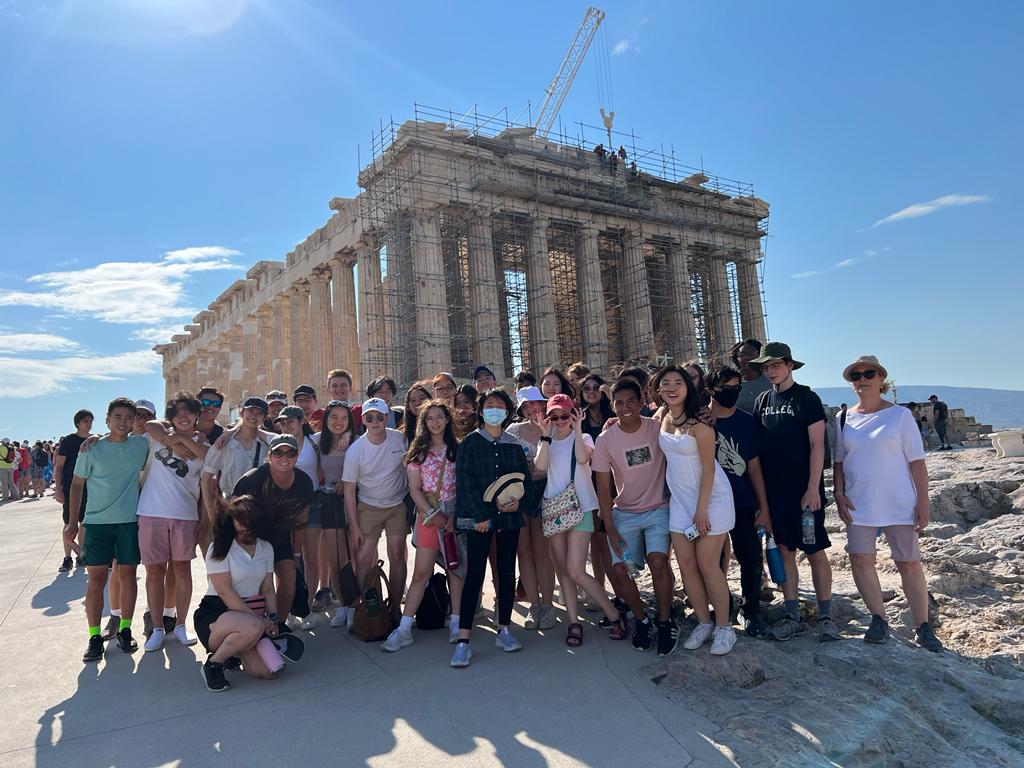 BPYO members in front of the Parthenon atop the Acropolis.

The Acropolis, itself, looks exactly like you’ve seen it in countless postcards, picture books, tour guides, and movies. And yet, there’s something distinctly moving about actually being there, as many in our group seemed to sense.

Spiritually, if not geographically, it’s the heart of Athens. The name “acropolis” is, in fact, a compound word meaning “high city.” In ancient times, the hill on which it’s built was the apical point of the community and one of the reasons the modern municipality lacks tall buildings is that its planners determined to honor the Acropolis’s role as the zenith of the metropolis. So it basically remains.

At the top are the Parthenon and the Erechtheion (a temple dedicated to the goddess Athena), as well as a handful of other ruins, plus spectacular views of Athens itself. We spent a good hour or so taking it all in.

The Erechtheion (l) and Parthenon (r) atop the Acropolis, with BPYO members mixed in among the crowds.

While the place is a tourist trap, there’s much more to it than that. To be sure, there are only a handful of man-made destinations (the Coliseum, the Pyramids at Giza, perhaps the Great Wall of China) that are so iconic and, yet, so meaningful to experience in person: the effect is somehow not diminished by familiarity or overexposure. How is that?

Part of it, I think, is that it’s simply astonishing to consider the durability of the place: the oldest structures on it date back nearly 2500 years. They’ve seen and experienced much. At various points, they’ve been treated very well – and very badly. Despite all things, the biggest of them (mostly) still stand.

But a larger reason for why the Acropolis has such an enduring emotional resonance (Benjamin Zander conceded he was in tears viewing it from a distance at sunset on Monday night) is far more subtle: the complex marries the past – the ancient past, at that – with timeless (and maybe, as far as Western sensibilities go, near-universal) aesthetic values. At one point, our tour guide, Calliope, talked about the design of the Parthenon combining “symmetry and harmony,” terms that, of course, have profound implications across the arts. And you can see that in the ruin, even if you haven’t got the first idea of how a Fibonacci sequence works or what the Golden Mean is – or even an appreciation for geometry: the building, in its famous, damaged state, retains a breathtaking beauty and majesty.

For those in the performing arts, though, there’s even more: the remains of the Theater of Dionysus, the original venue for Ancient Athenian theater, lies at the base of the Acropolis hill. Without going into the details of it, let’s just say that Greek philosophies of theater, poetry, music, and art form the foundations of Western culture. To stand, then, above this venue where the seed of it all – Greek drama – was first planted, a stage for which Sophocles and Aeschylus wrote plays, was peculiarly touching. 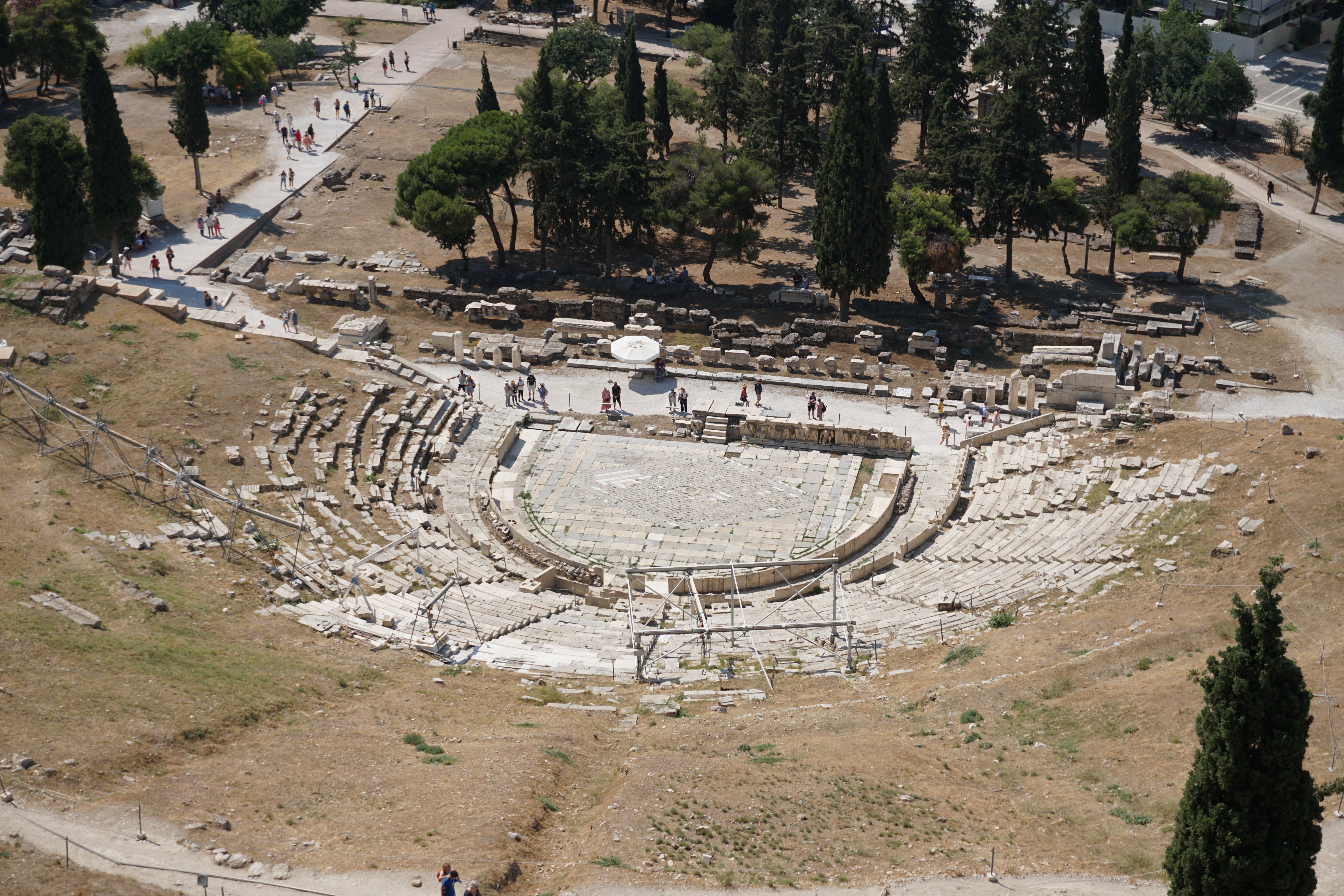 The ruins of the Theater of Dionysus at the base of the Acropolis hill.

The fact is, so much that we, as musicians, do and take for granted – the ways audiences and performers interact; the functions of actors, soloists, choruses, and orchestras; the physical layout of a theater; how so much of the music we love has been imagined and constructed; even our understanding of how music affects us on an emotional level – is rooted, somehow, in this physical place. To be there on Tuesday was extraordinary: sobering and humbling, yes – but also, given the artistic devastation of the last couple of years, encouraging, too.

How right, as well, to get to visit this spot with the BPYO – an orchestra that, as I’ve made no secret of noting over the years, gets so much right, musically and otherwise – and at the start of its first post-pandemic tour. Talk about serendipity. The rest of the day was no less fulfilling, if a touch less profound. We had lunch in the Monastiraki district (the oldest continuously inhabited part of Athens) plus a couple hours of free time to wander its thoroughfares. Afterwards, there was a siesta – heat wave or none, mid-afternoon in Greece this time of year is intensely warm, so everything sensibly shuts down for a spell – and then we kicked off the musical portion of the trip.

This wasn’t a formal concert but a side-by-side with the El Sistema Greece Youth Orchestra at the American College of Greece. Side-by-sides were one of the enduring highlights of the BPYO’s previous tour to Brazil and this interaction picked up right where those left off. Both groups played for each other – the BPYO did Maurice Ravel’s La valse and the Sistema group offered an arrangement of a traditional Greek tune – while the combined ensembles also read through Jean Sibelius’s Andante festivo, a Merle Isaac arrangement of Gypsy melodies, and the first movement of Antonin Dvorak’s New World Symphony. 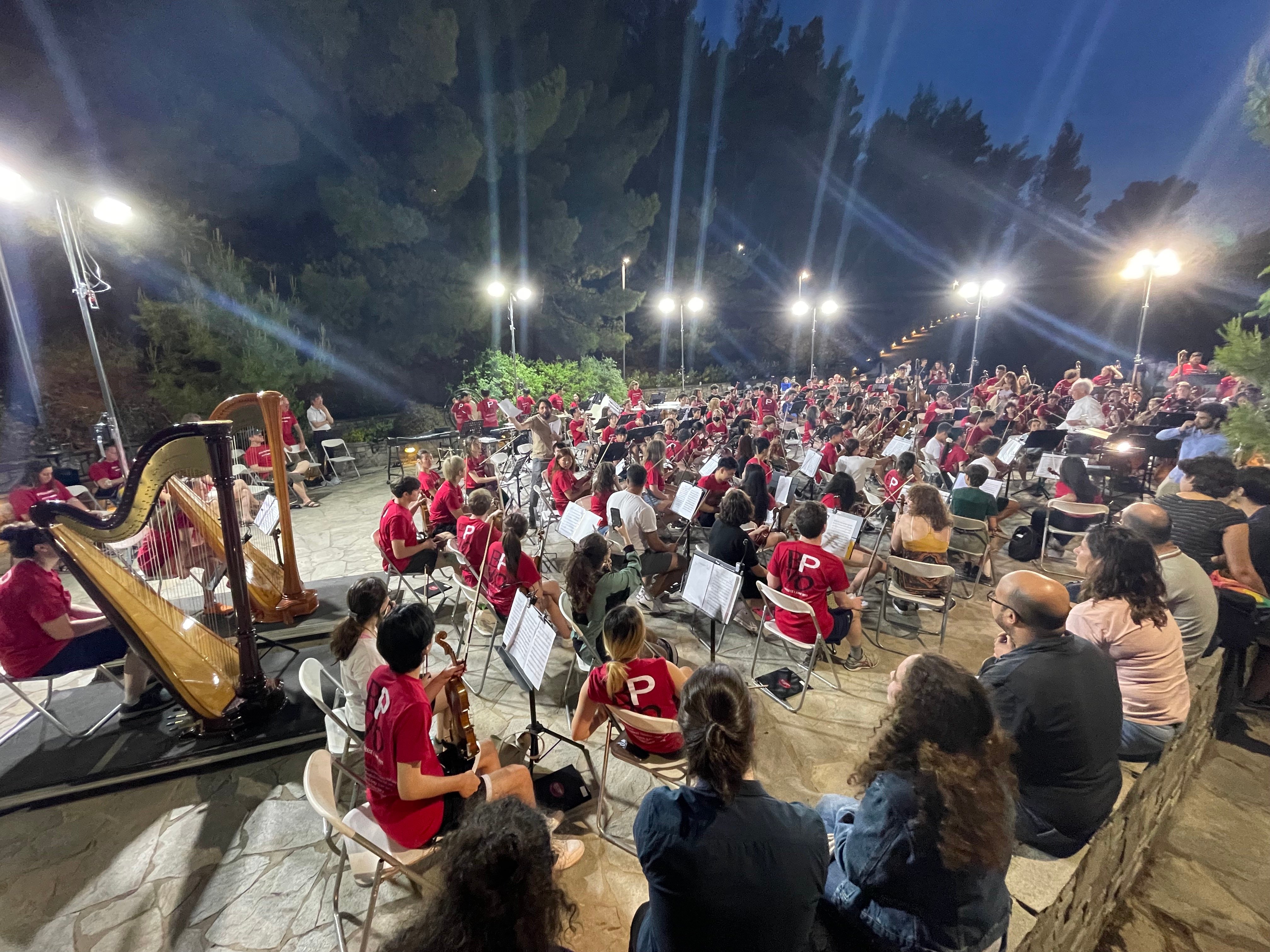 BPYO and member of El Sistema Greece Youth Orchestra playing in a side-by-side at the American College of Greece.

The outdoor setting didn’t really make for great acoustics – there was some sense that the orchestra members were having trouble hearing each other across the stone plaza – yet La valse swung convincingly (the four-bar brass band moment about three-quarters of the way through actually fit the outdoor performance space beautifully) and the concluding number, with its choreography and hand claps, made for a rousing send-off. It was a sweet, fun event, and the Sistema group is expected to be guests of the BPYO at Wednesday night’s concert. 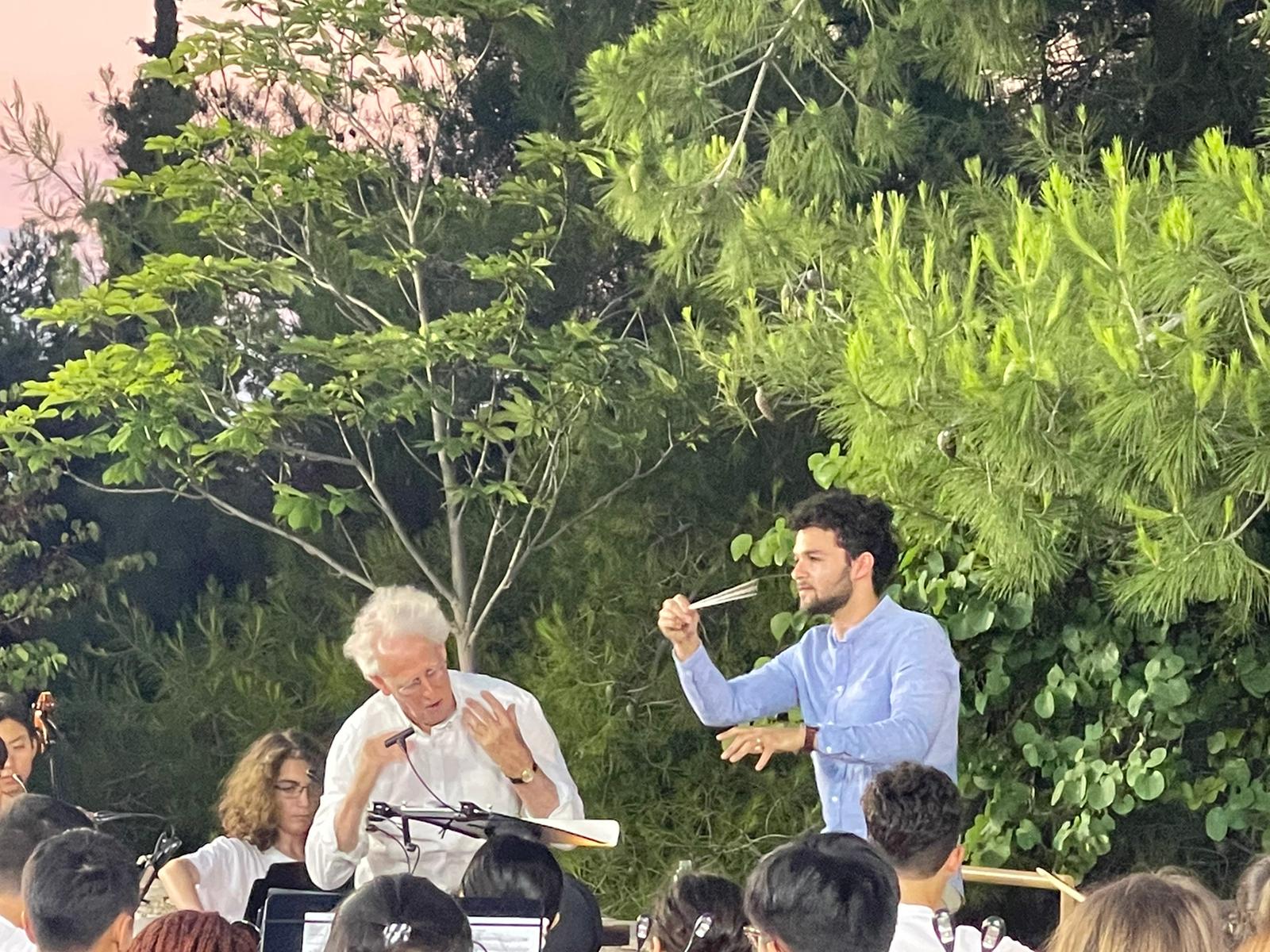 Afterwards came a late dinner at a nearby taverna. Here we had a feast of Greek cuisine – salad, tzatziki, kolokithokeftedes (aka zucchini fritters), various meats, bread, potatoes, some kind of honey-drenched cake, and numerous other things I’ve shamefully forgotten the names of – plus a birthday celebration (percussionist Izzy Butler’s big day was Tuesday) all mixed into one. By the time we got back to Titania Hotel it was well past midnight, but I didn’t catch any complaints: all the big (and most of the small) things, to this point, are running just as they should.

Tuesday night's sunset as seen from the American College of Greece.