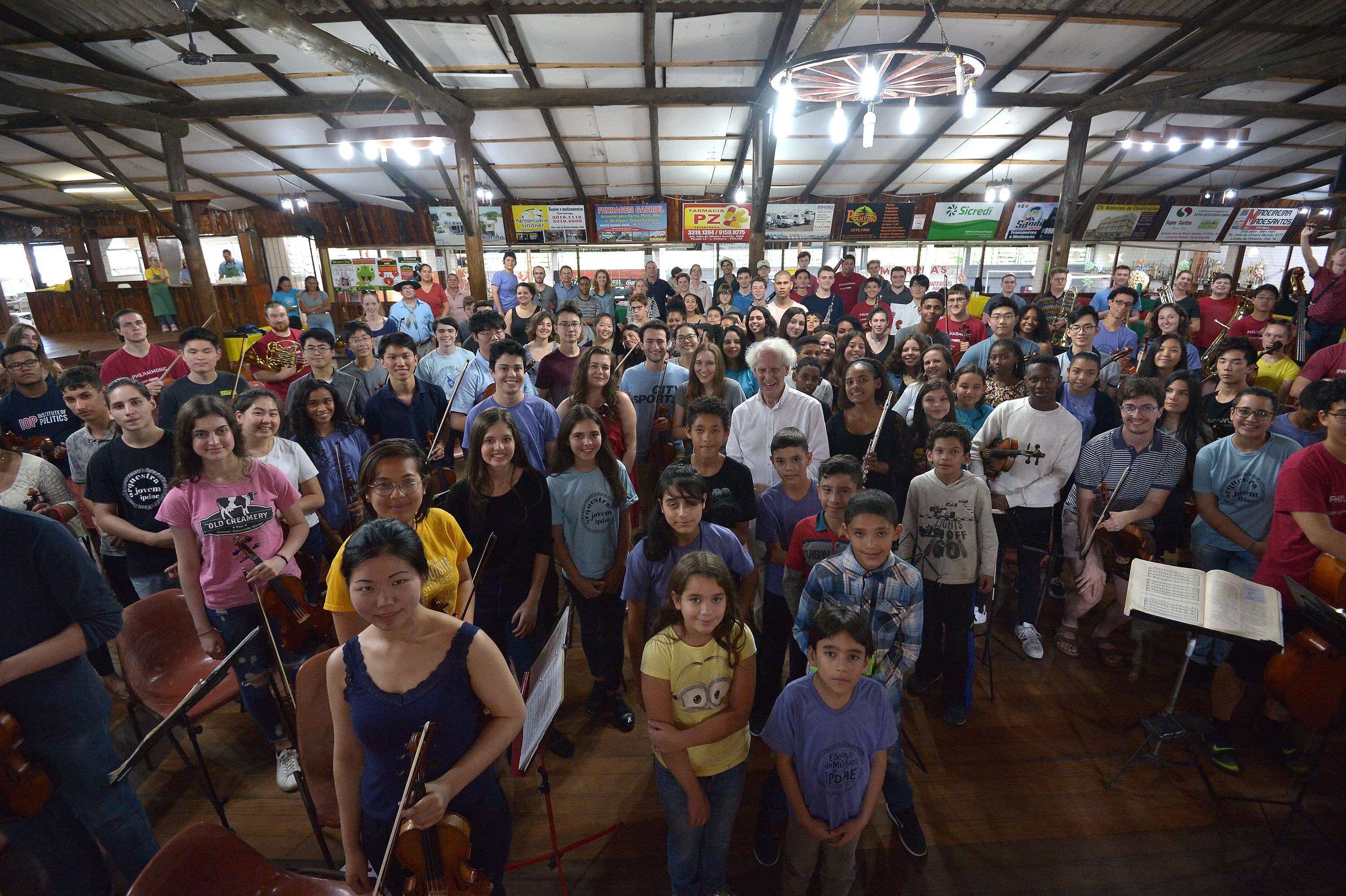 The BPYO’s tour is subtitled “tour of possibility,” which basically means that, within our set itinerary, there remains a world of opportunities to explore in order to grow, individually and collectively. After a week or so on the road, you can – and probably should – expect the unexpected. Indeed, that’s how some of this trip’s most memorable moments (like the NEOJIBA exchange) have come about.

Playing for our exuberant audience in Campinas provided another of our tour’s high points, but even that couldn’t prepare us for the next stop of our journey in Porto Alegre. The city marks the southernmost point of the BPYO’s tour and, while we had a venue reserved, it remained unclear what, exactly, the performance conditions would be until we arrived there.

Then we saw the Auditório Araújo Vianna. 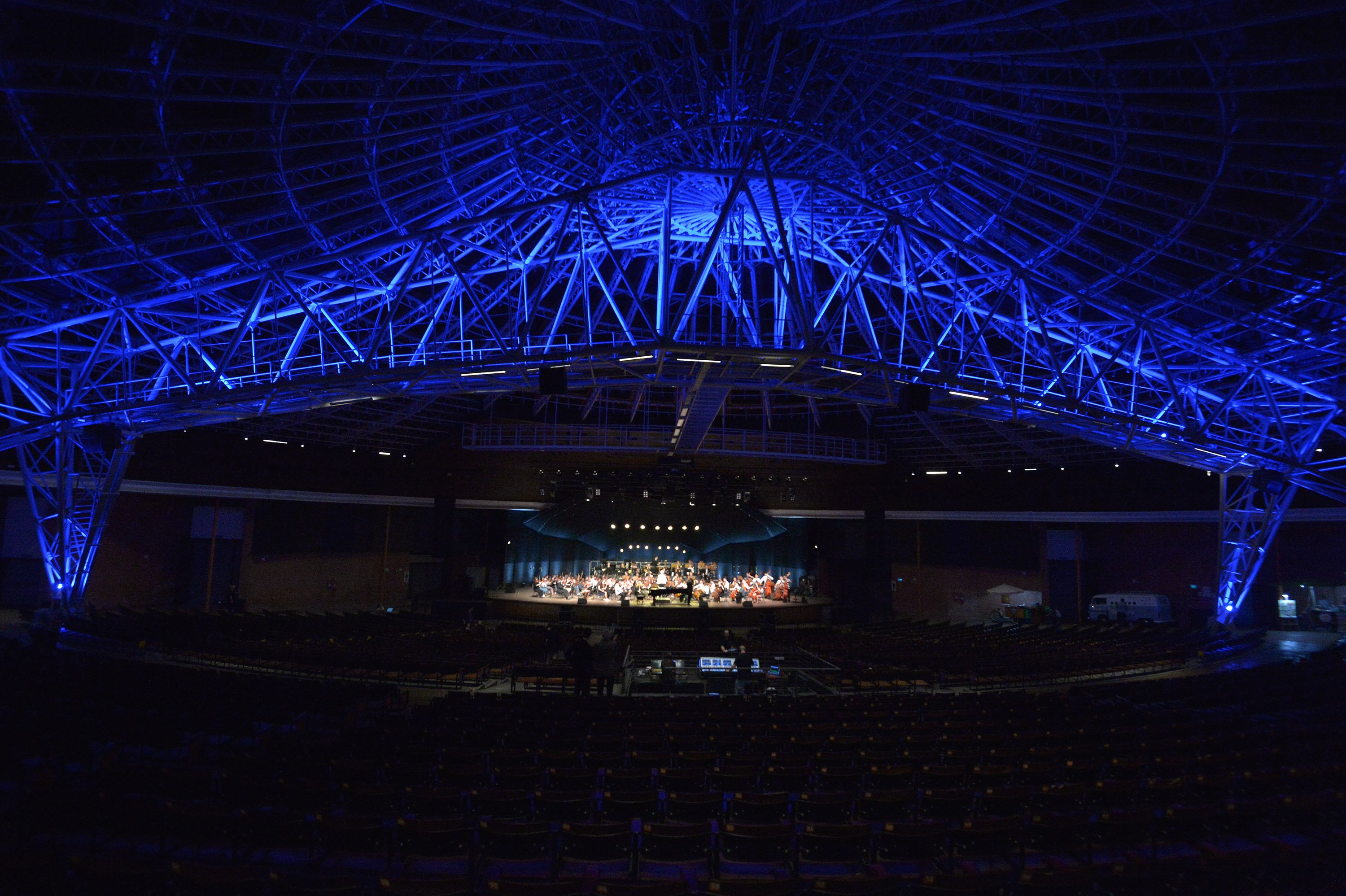 Picture, if you will, the Koussevitzky Shed at Tanglewood if it sat about 3000 and had brick walls instead of unobstructed views of the lawn. Throw in an enormous, lighted steel trestle bisecting the structure, and you’ve got a sense of the place. 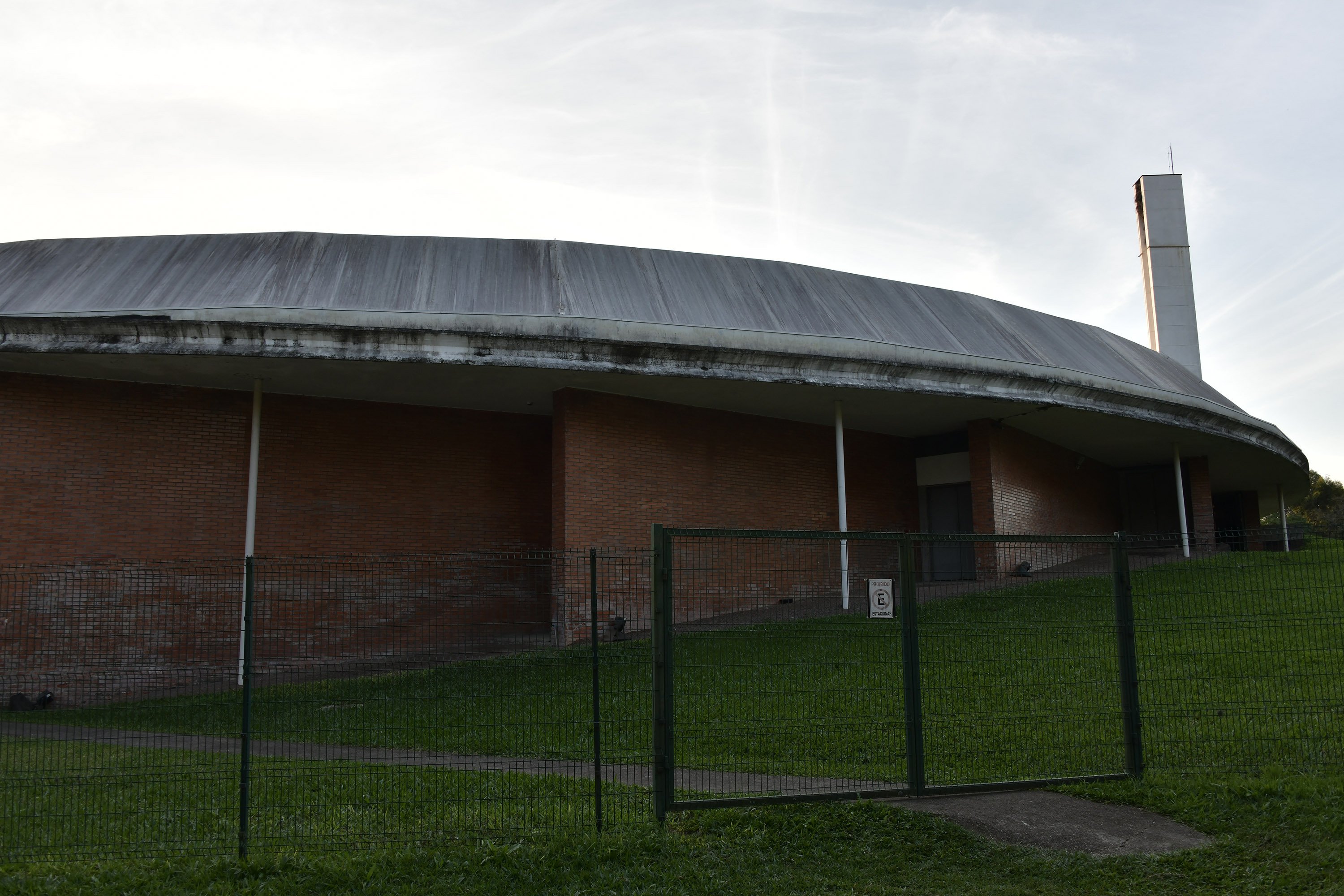 It’s a venue that’s typically used for popular music concerts, not symphonic ones (the next program on the Auditório’s schedule is Lord of the Rings: In Concert). But that fact – and this goes a long way to demonstrate the BPYO’s flexibility and openness to new possibilities – didn’t bother anyone. The players, from the time they walked in the door, were invigorated. Even Benjamin Zander seemed thoroughly delighted by the space: he spent a good ten minutes checking it out and chuckling, “This is wonderful, this is wonderful!”

For an orchestra, the place is a bit of a barn, and the concert had to be amplified, so every music stand was outfitted with a microphone. But the players adjusted to it easily: they rehearsed their Wagner, Rachmaninoff, and Dvorak just like they were back in the Sala São Paulo and played with plenty of vim. 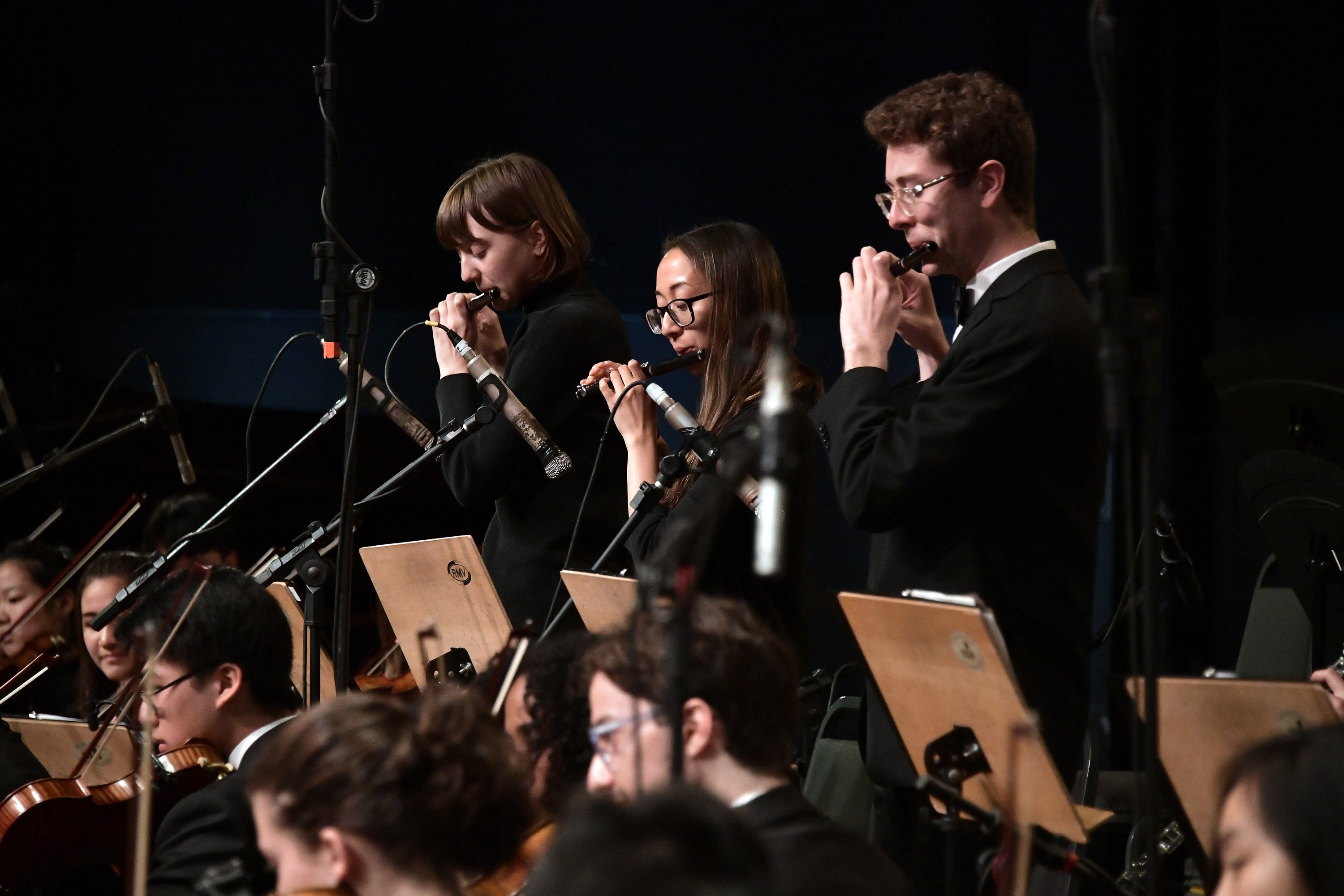 The engineers balanced things out nicely and, if the BPYO’s sound wasn’t quite the same as in Symphony Hall, well, that was OK.

I’ve always wondered what it would be like if classical music performances were treated more like pop concerts or sporting events and, Sunday night in Porto Alegre, I got to find out. Short answer: it was awesome.

There was a slightly carnival-esque feeling to the whole evening. We had a beer bus on the premises (literally: an old Volkswagen bus was off to one side of the theater selling beer) as well as a hot dog stand. Vendors strolled up and down the aisles hawking water and Coca-Cola. People freely came to and from their seats. And, somehow, none of that proved distracting. 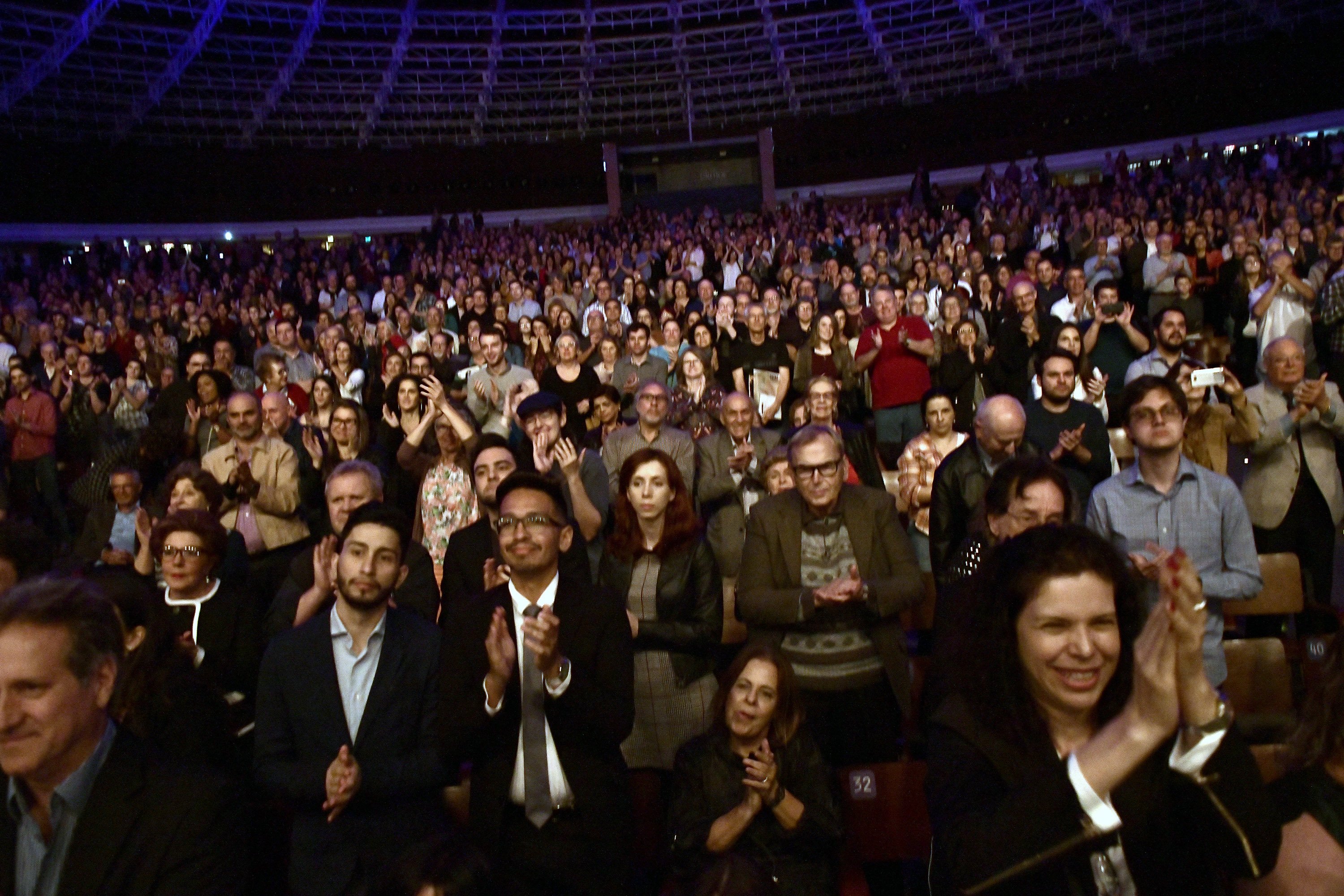 Audience at the Auditório Araújo Vianna

Despite (or, perhaps, because of) the informality of the setting, the BPYO had by far its biggest audience of the tour – a crowd in excess of 2000 (it filled up more than two-thirds of the seats in the place). It was also, by a long measure, the best-behaved audience I’ve been a part of this year.

The throng was completely riveted by the orchestra. They were quiet throughout and particularly concentrated during the soft moments of the Rachmaninoff: you could have heard a pin drop, so focused was their attention. We don’t always think of audiences (especially well-behaved ones) being active parts of concerts, but they can be and this one was. They fed off of the orchestra’s energy and the BPYO, in turn, was charged by the crowd’s. 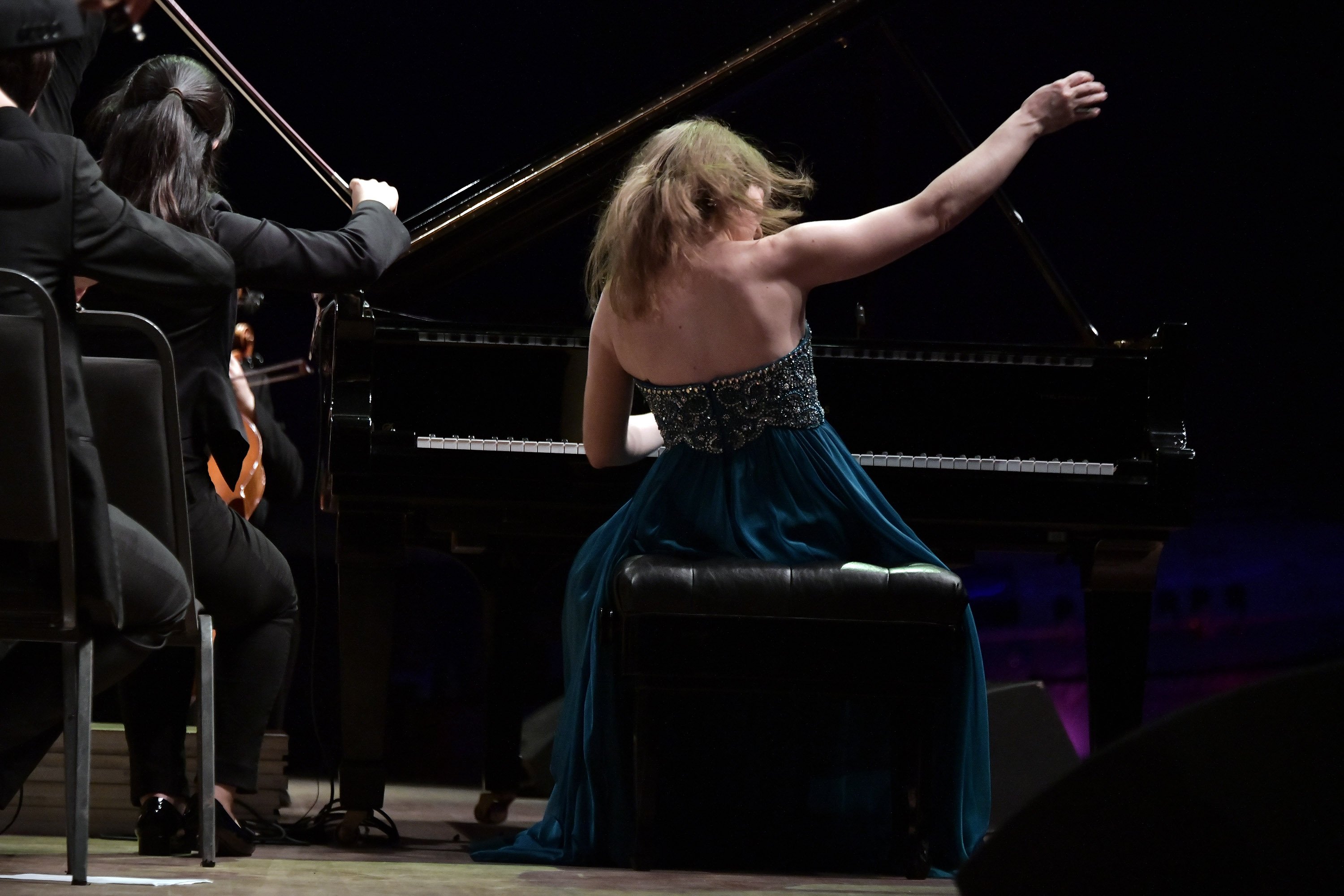 The orchestra made grand and, at times, peppy work of the Meistersinger Prelude. Anna Fedorova played another brilliant Rachmaninoff Second Concerto. And Dvorak’s New World Symphony flowed with a natural warmth that belied the group’s amplification.

As you can imagine, the audience ate it up. Fedorova got her second rock-star-like reception of the tour; actually, the whole orchestra was received rapturously, as well.

Afterwards, the players had nothing but praise for the experience.

“This [was] so cool,” principal trumpet Mark Macha told me.

His section mate, Dan Vengler, agreed: “This concert was the best everything on the tour: best orchestral playing, best audience, best hall. It was a very unique experience and I really think that it would be great for more orchestras to play concert music in arenas for giant crowds.”

Exhilarating as Sunday night’s performance was, Monday’s activity ended up being, for myself and at least a few members of the BPYO, the tour’s most touching and remarkable. 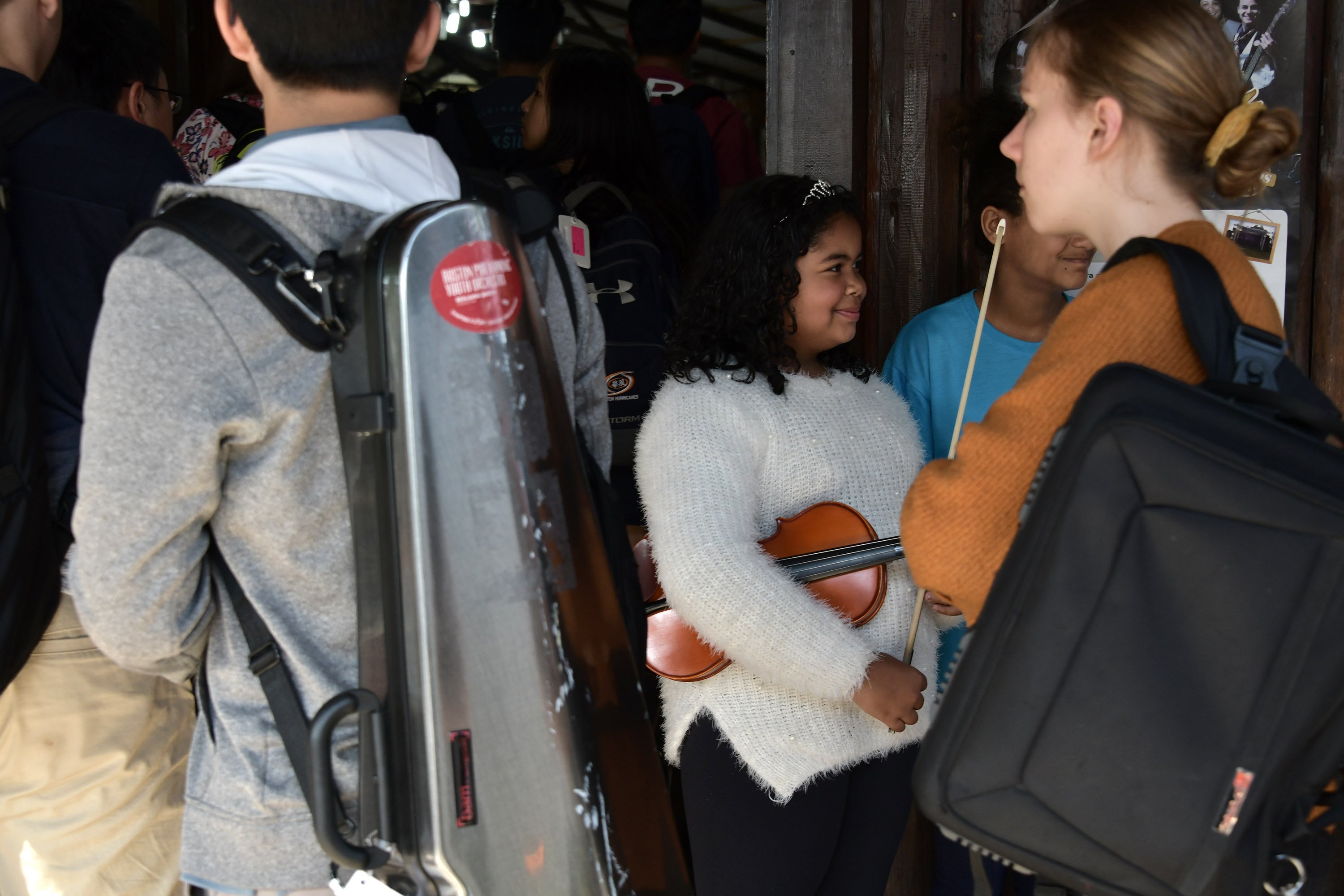 That morning we traveled for about an hour through Porto Alegre to a favela in the Lomba Pinheiro section of the city. There, we held an exchange with IPDAE (Instituto Popular de Arte-Educação), an El Sistema-inspired music school that is the only of its kind in the area. The institution has about 200 students, from their teens on down, and they come primarily from this poverty-stricken neighborhood (though a few also trek in from further away).

Due to the size of our group, we met at a nearby cultural center, not the school itself, to hear these young musicians perform a couple of pieces and also to play for and with them. 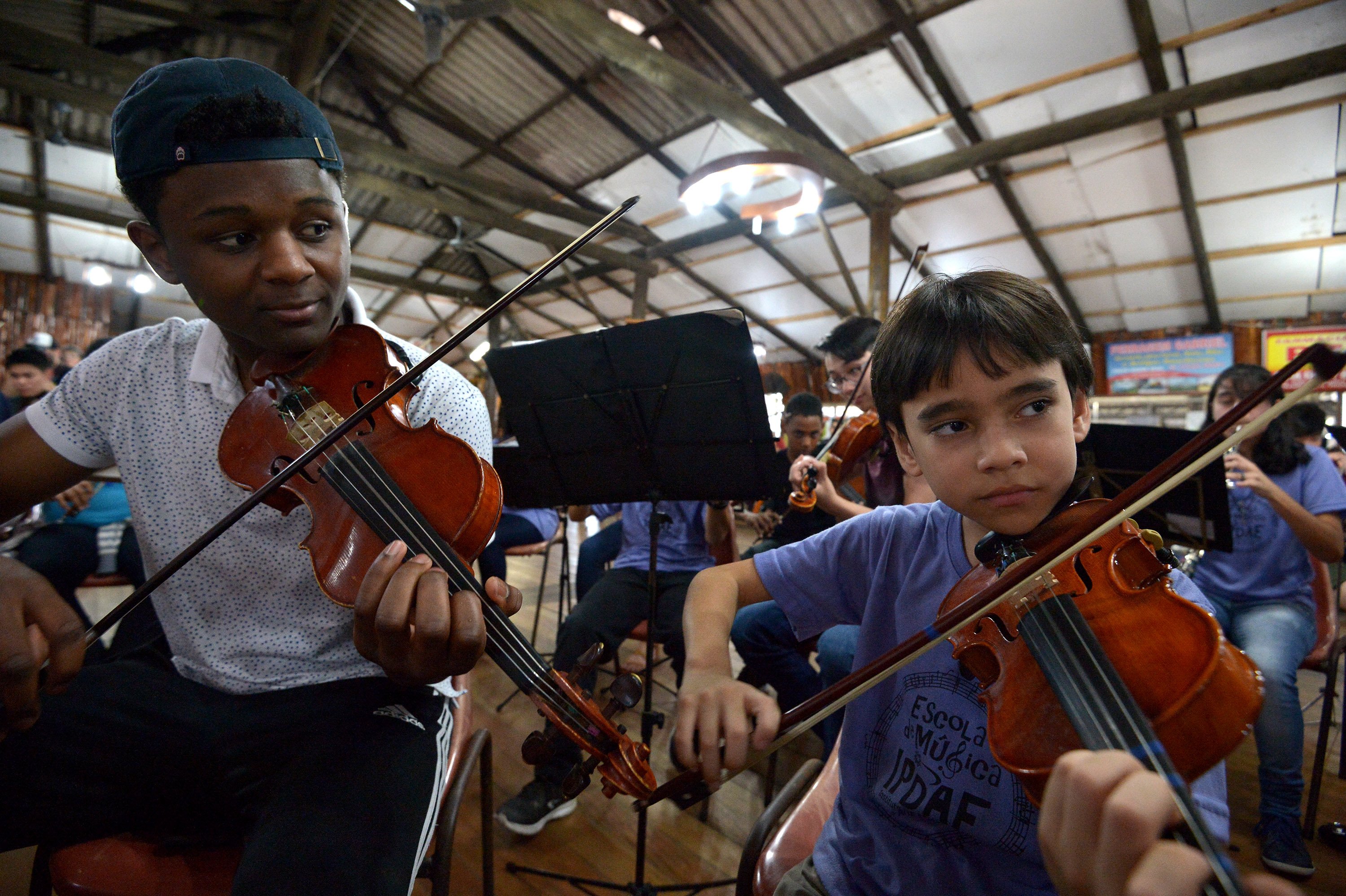 Talk about an enthusiastic, sweet group of children. They don’t have instruments of particularly high quality –  or even the ones that they want to learn (one of our trombonists, Quinn McGillis, donated a much-needed trumpet and trombone during our visit). But they play with tremendous heart, spirit, and excitement. 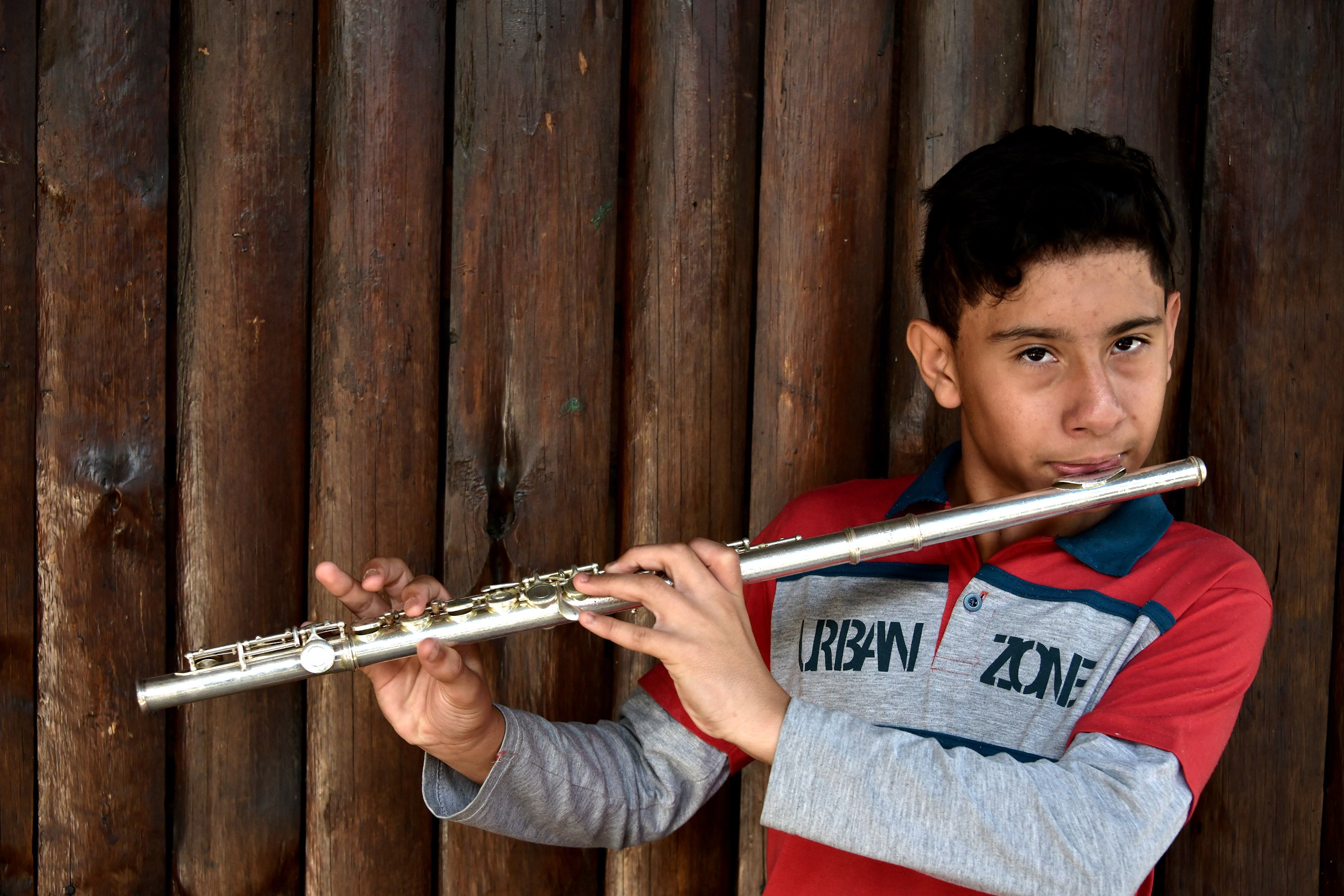 We heard from each of the school’s two ensembles: one performed Brahms’ Hungarian Dance no. 5 and the second presented a Brazilian piece called Asa Branca.

Then the BPYO gave a short concert for the students, consisting of The Stars & Stripes Forever, Camille Saint-Saëns’ Introduction and Rondo capriccioso (with concertmaster Mitsuru Yonezaki delivering a vibrant account of the solo part on very short – as in minutes – notice), and the last movement of Dvorak’s New World Symphony.

Our audience took in the performances keenly and rewarded them with hearty applause. Afterwards came lunch and then, for about forty-five minutes, different orchestral families broke into small groups and basically just jammed together. 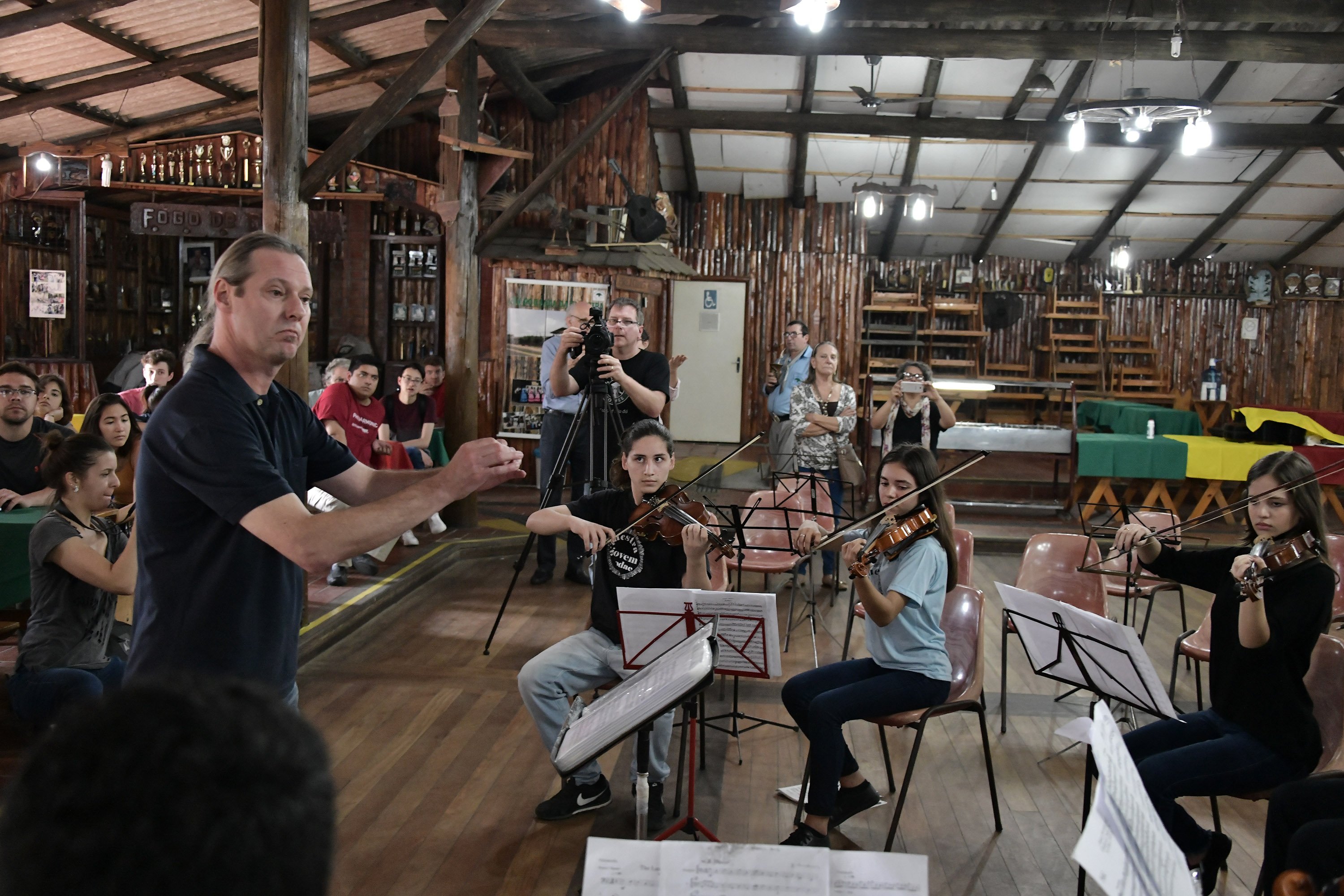 After the casual formality of our last side-by-sides, this afternoon session’s anything-goes mindset was a total blast. Violinists and cellists played Suzuki excerpts. The violas read through a Telemann concerto. Woodwinds and brass got together in different rooms and played whatever they had on hand.

A couple of BPYO players gave impromptu lessons and some of the IDPAE kids played solos. 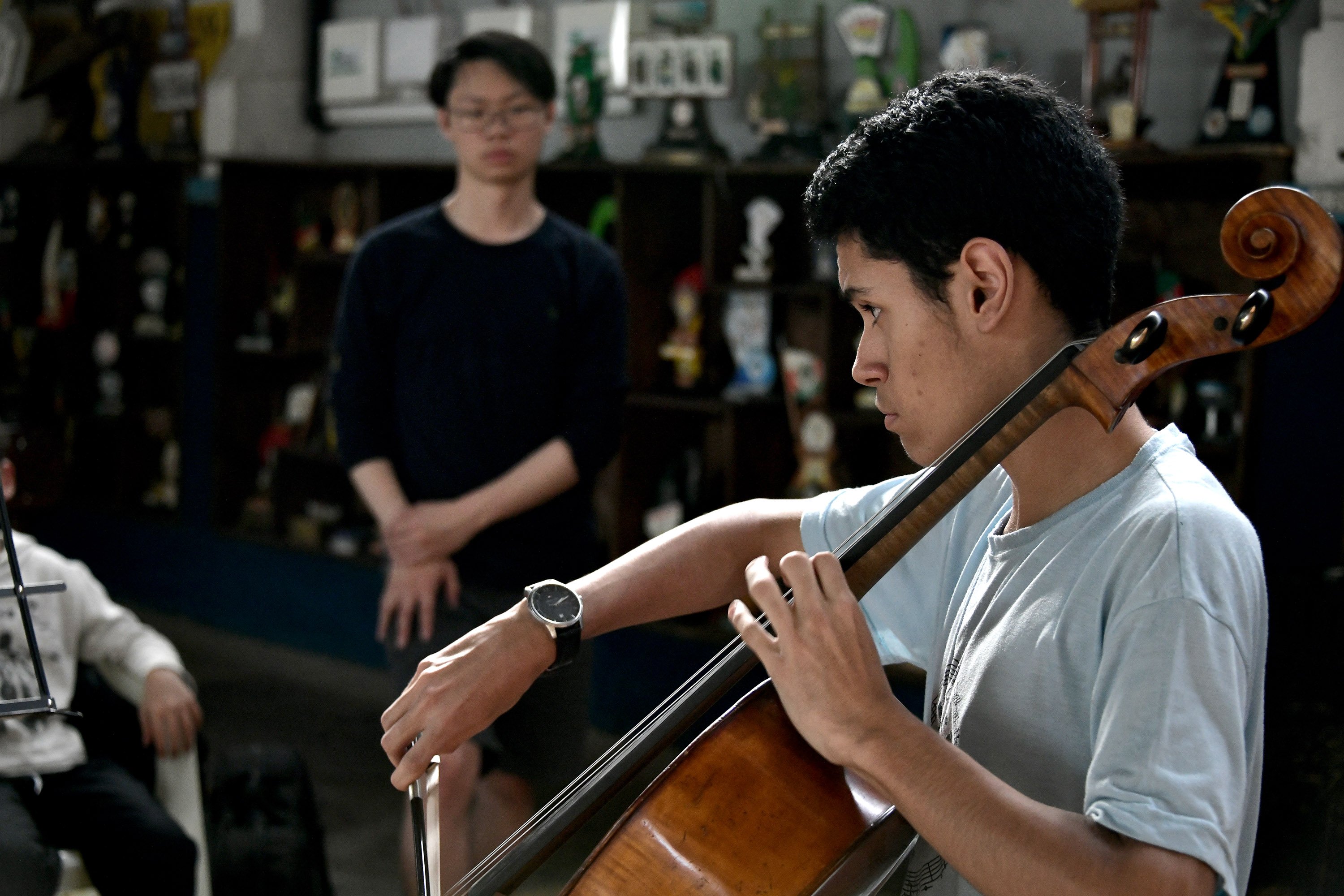 In such a small place, of course, the result was a din of sound. But it was as pure, joyful, fresh, and generous a time of music-making as we’ve had in Brazil. I don’t think it’s too much to say that this side-by-side could have gone on all afternoon and nobody would have complained. 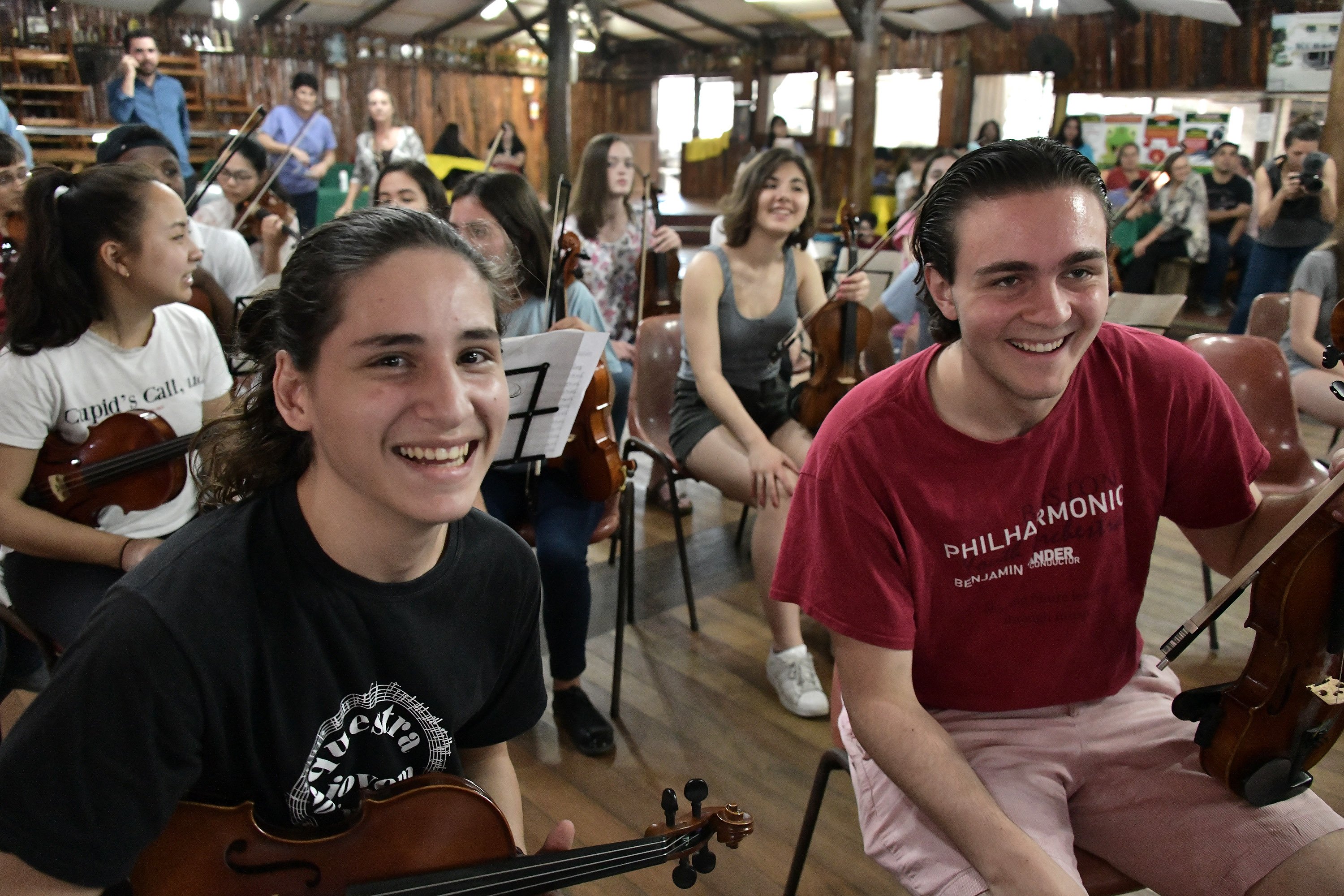 Indeed, for leaving an impression and creating lasting memories, this exchange was an extraordinary experience (“a top-five highlight of the tour for me,” was how our tour doctor, Andrew Lan, put it).

“This was my favorite side-by-side,” Quinn, the aforesaid trombonist, told me after we arrived in Belo Horizonte later that night. “I saw myself in the kids when I was looking at them: they’re at the beginning of the road and I’m a bit further down it. It can be tough to see them struggling, but it’s good to be able to help and expose them to something they wouldn’t have otherwise experienced.” 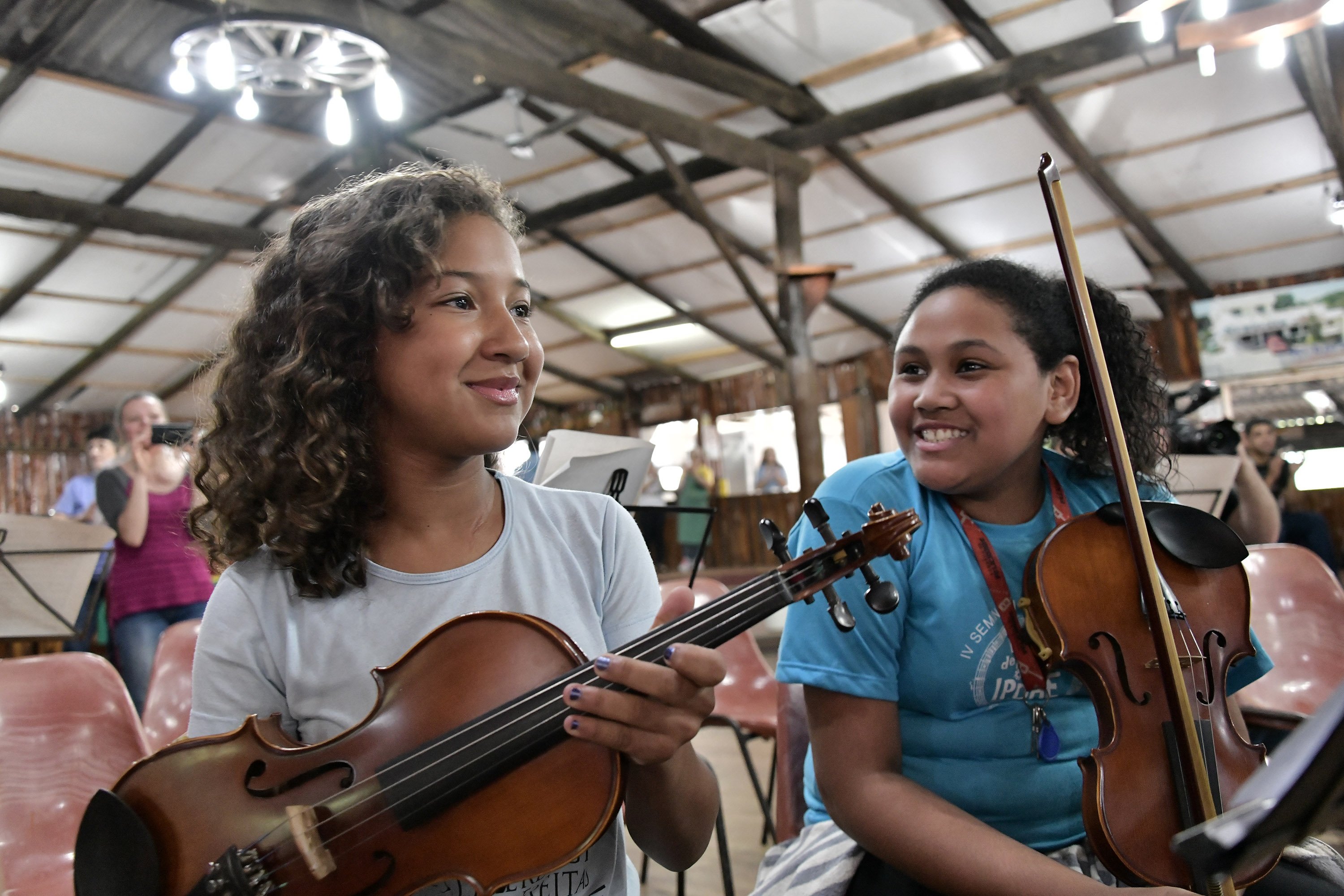 At the same time, he gave voice to the wild dichotomy of experience and access that we witnessed at IDPAE and that had been gnawing at me (and, presumably, others) after we left. “The exchange was a wonderful opportunity,” he said, “but it was also a bittersweet time because we knew that our adventure was continuing and theirs might never get started.” 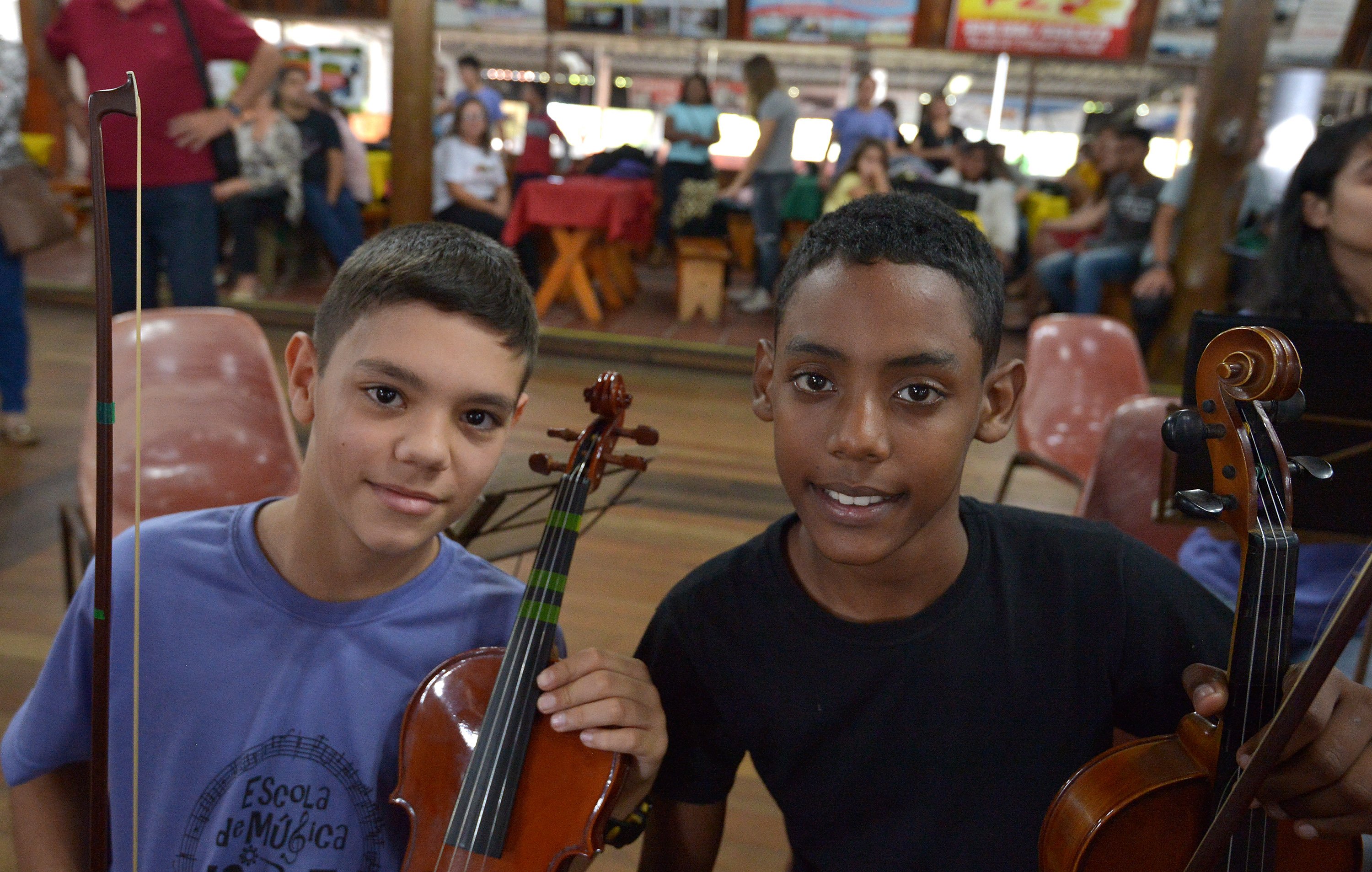 Even so, our group learned some profound lessons from the children we encountered on Monday afternoon. 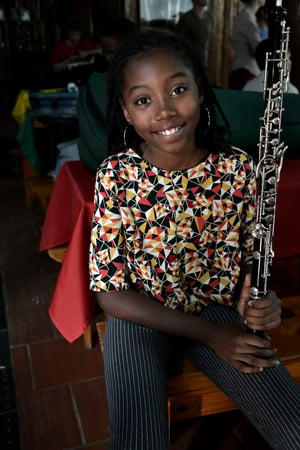 “The experience really helped me to focus on why we do what we do,” bass trombonist William Ronneburg told me at lunch the next day. “Most of us are in conservatories and it’s so easy to forget about how we’re really supposed to play music. But the kids at the school were so thrilled to share what they do and to play. It was a great reminder to me that music is supposed to be fun and be shared.”

“The side-by-side was really, really fun,” violinist Telden Lopes-Lotufo agreed. “It was great to see the mix of abilities [between the kids and BPYO] and for the kids to get to experience what we do where they live.

“For me,” she continued, “a big highlight was how the kids responded to the performance. There was a girl who’s been playing cello for just seven months. And she told me that, after hearing us, she wants to keep on playing so that she can be in an orchestra like ours!” 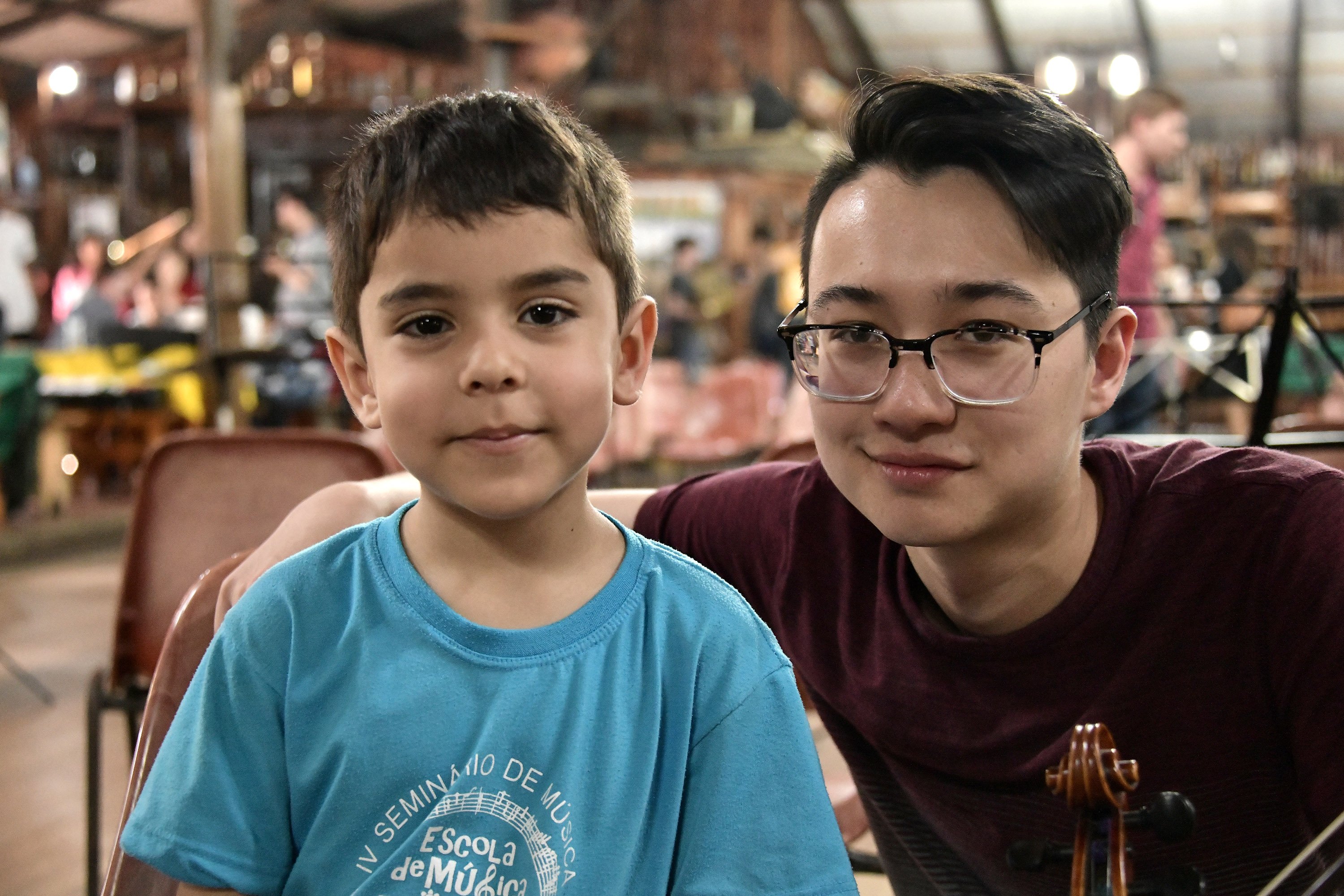 One of the afternoon’s most striking memories, though, wasn’t a verbal interaction.

“The thing that stands out most to me from the exchange,” violinist Ilya Yudkovsky told me, “was this young girl who was standing behind Benjamin Zander before the start of the Dvorak. She was standing there with her friend talking and, when the music started, her mouth dropped open, and her eyes – actually her whole face – just lit up. It was clear that she was just overcome with emotion: she would clap her hands to her cheeks and look over at her friend and just giggle – it was as if she just didn’t know what else to do. And it’s moments like those that we live for. That’s when we know we’re changing lives.” 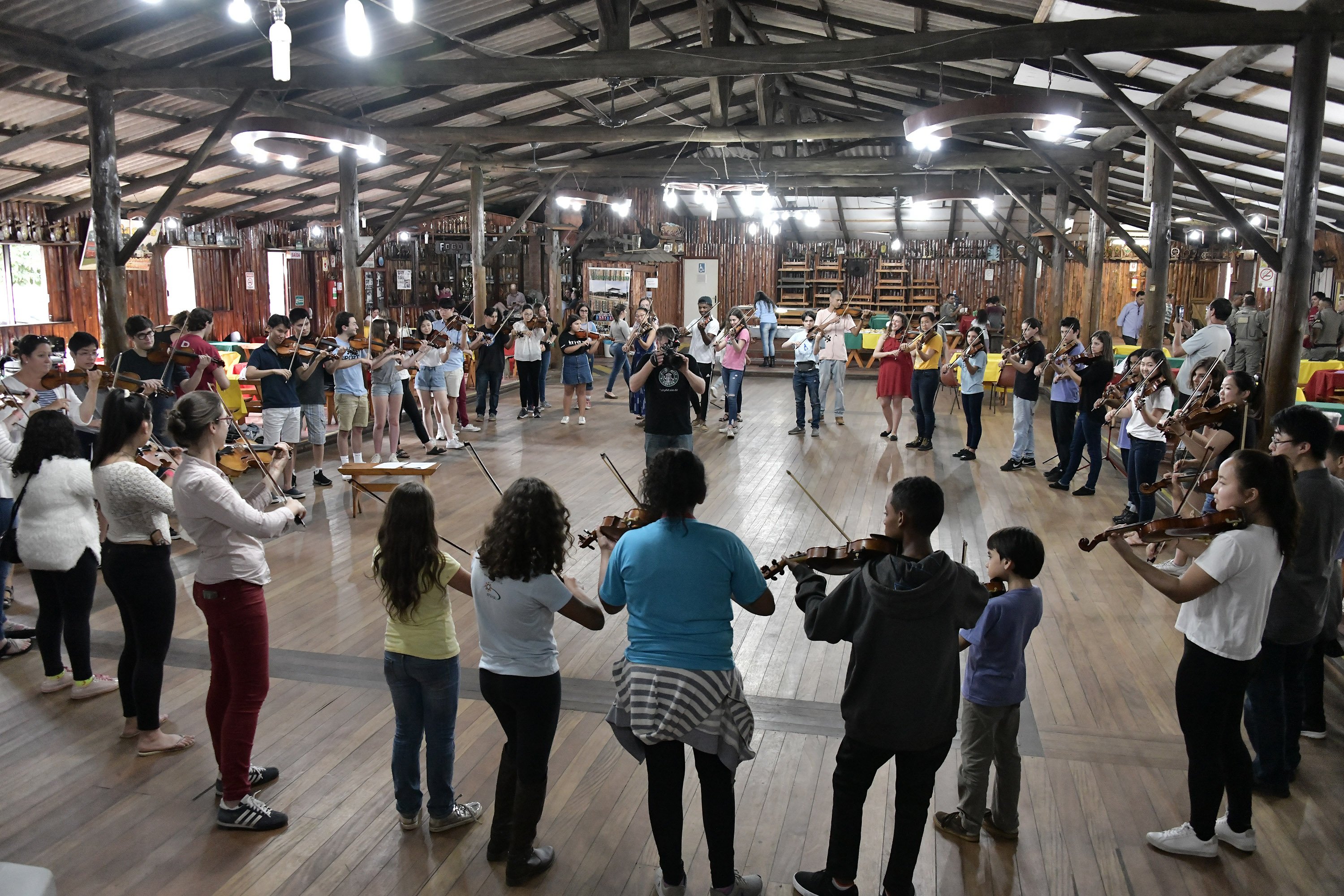 “Miracles happen every day” has become a familiar Zander refrain over the course of this tour. But never, on this trip, has the statement rung truer than during our time in Porto Alegre. For the lucky hundred-twenty of us who could be there, it was thirty hours we’ll never forget.