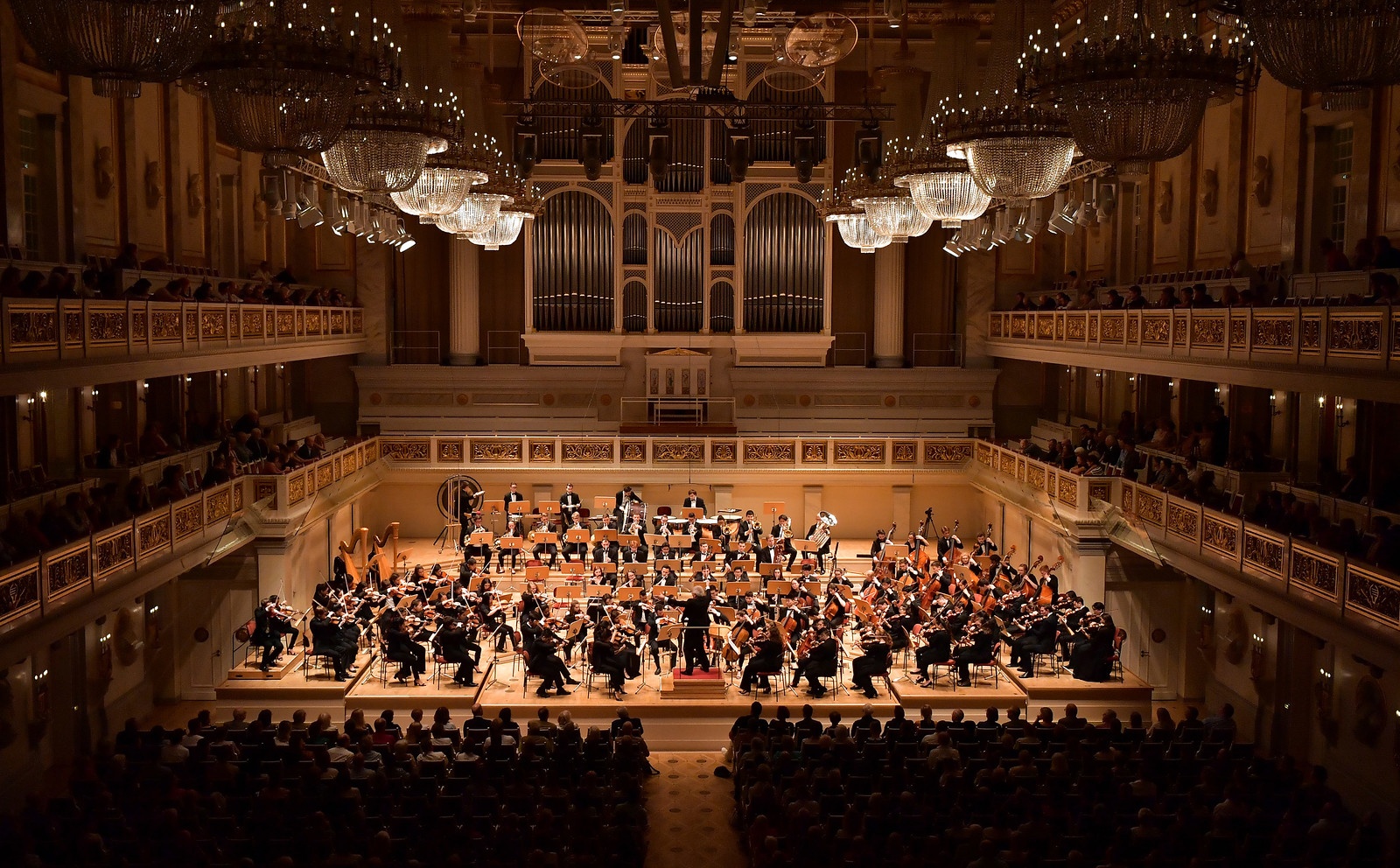 BERLIN - Mysteries lie in the transition between rehearsal and performance. No amount of rigorous rehearsal can guarantee a superior performance; inadequately prepared concerts can sometimes take wing. 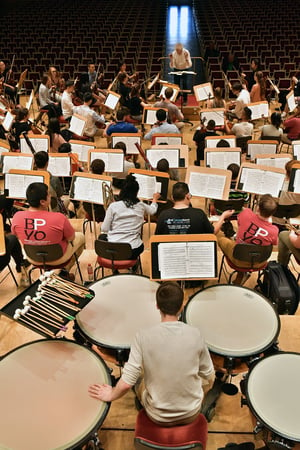 The triumph of the opening evening of the Boston Philharmonic Youth Orchestra European tour was the result of many converging factors, but the dominant ones were months of detailed Saturday afternoon rehearsals of Gustav Mahler’s Ninth Symphony by music director Benjamin Zander who has been conducting this work for more than 40 years and who loves it with a white-hot intensity. The orchestra too enjoys a challenge – not many youth orchestras would dare to take on this work which remains one of the most difficult pieces in the repertory even though more than a century has passed since Mahler composed it. Zander had armed the musicians for bear, and the players reveled in the struggle and rejoiced in the ultimate victory. The youngish audience which nearly filled the hall was engaged, informed, attentive and enthusiastic; at the end of the symphony the public in Berlin’s Konzerthaus jumped to its feet shouting “Bravo.” Zander made a brief speech about how saddened he had been at the recent rift between the United States and Germany and hoped that the performance had served as a testimony to what most Americans really feel, and that redoubled the response.

Then Zander said he had been instructed not to offer an encore – but he would do so anyway, the “Nimrod” variation from Elgar’s Enigma Variations, the BPYO’s signature encore, a testimony to friendship, nobility and love.

The program had begun with George Butterworth’s setting of two British folk ballads followed by a feverishly seductive performance of Ravel’s end-of-the-world La Valse. There were many extraordinary contributions by principal players but to avoid repeating praise in writing about eight concerts with the same program, I will single out only one or two at a time. The part for French horn is long, exposed, and exceptionally demanding, and Joe Cradler nailed it; his tone is both commanding and expressive and no one would ever know how tricky his instrument can be. He’s already accepted his first full-time professional job in the Marine Band, continuing a family tradition; his father still plays in the same prestigious ensemble. He had to get permission to make this tour with the BPYO but when his commanding officer learned the young player had the opportunity to play Mahler’s Ninth Symphony in eight European cities, he told him he could do it. Concertmaster Mitsuru Yonezaki has been playing with the orchestra for years; now in her advanced studies at Juilliard, she still commutes to Boston every Saturday to rehearse with the BPYO. Zander repeatedly returned to the stage to accept the ovation and to acknowledge and celebrate all the solo players as well as each section of the orchestra which rose in turn. An admirer came on the stage to present Zander with a spectacular single long-stemmed sunflower which he immediately handed to Yonezaki. She carried it with her to the post-concert dinner in a nearby restaurant and it seemed to be bowing to her too. She may exhibit a shy smile, but she is a fearless warrior and every note is strictly in tune.

Those other factors that contributed to the atmosphere of the evening? One of them was the Konzerthaus itself, a building with a long, prestigious and difficult history. The imposing structure was completed in 1821 and served the spoken theatre for more than a century. In the Nazi era it was under the direction of the eminent German actor Gustaf Gruendgens whose production of Goethe’s Faust became a pinnacle achievement of German classical theatre in the 20th century – and a controversial novel by Klaus Mann, Mephisto, which subsequently became an Academy Award winning film. Bombing at the end of World War II destroyed the building, both the exterior and the interior. The reconstruction and reconfiguration of the building began in the 1960s and lasted nearly a decade. The historic exterior was rebuilt; the interior became a newly designed concert hall rather than a theater. It is spacious and seats nearly 1500 people; the auditorium like Symphony Hall’s, is shoebox shaped, with an elaborately painted ceiling and the lobbies are inviting and extensive. When the hall is full of people the acoustics are clear, helpful and even brilliant, helped along by some plastic panels in the ceiling . The resident ensemble the Konzerthaus Orchestra presents more than 100 concerts a season.

A former student of Zander’s is now the principal viola of that orchestra, Amalia Arnoldt, and she helped arrange for a number of the BPYO musicians to attend a rehearsal of Brahms’s Double Concerto with prominent young soloists Vilde Frang, violin and cellist Nicolas Altstaedt under the direction of the Slovak conductor Juraj Valcuha – who rehearses in English (the current music director is Ivan Fischer). It would be inappropriate for an invited guest to review a rehearsal which is a private work-in-progress, but it was clear that the orchestra is an excellent ensemble that has earned its loyal audience 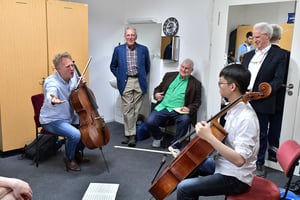 After the rehearsal there were meetings and classes with players from the Konzerthaus Orchestra. I attended the class led by the principal cellist Stefan Giglberger, who is an energetic and charismatic fellow who knows what he is doing – and why. Two impressive BPYO musicians offered movements from Bach Suites, Zachary Fung and Minyung Suh – they didn’t know in advance that they were going to play, or what they were going to play, but this didn’t seem to rattle them at all. Giglberger was funny and enthralling and he can play with words as well as he can play the cello – he instructed one of the young men to play a passage as if he were dribbling, not pumping, a basketball.; to the other, playing the prelude to the C Major Suite, he said ‘You must enter like a prima donna coming onto the stage and acknowledging her audience and announcing ‘I have the most beautiful voice in the world, and I am the best singer in the world.’” Always he helped the young players to realize the emotional implications of the music as well as playing the notes, and none of Bach’s dissonances passed unobserved – or without meaning. Afterwards he climbed on his bicycle, his cello strapped to his back, and vanished down the street with a jaunty wave. 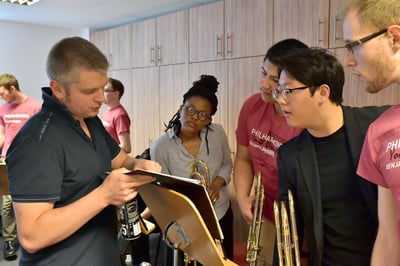 Meanwhile in other rooms the trumpeters and the low brass were in meetings with their Konzerthaus counterparts. And in another hall, BPYO players were watching Sir Simon Rattle rehearsing the Berlin Philharmonic. They had hoped to hear soloist Krystian Zimmermann, who no longer plays in the United States, but the pianist prefers to work in private so everyone in the auditorium was asked to leave.

For nine BPYO musicians the day began with performances in Dussmann, a downtown book-CD-music store which we were told is the largest such emporium in Germany. There is no comparable business left in the entire United States. It is a vast enterprise with an imposing Interior wall spanning several stories with a waterfall and tropical plants. A quartet of violas and a quintet of brass players performed in front of a second-floor window facing the street; they set up their instruments and music stands amid shelves of travel books, sci-fi and fantasy and graphic novels. The violists – Dominick Douglas, Aria Cheregosha, Jeremy Klein and Julia McLean – played an eloquent neo-Romantic Fantasie by the British composer-pianist York Bowen (1884-1961). The brass players – Mark Macha and Arthur Abbate, trumpets, Nate Klause horn, Matt Ethier, trombone and Frank John, tuba- offered a suite from West Side Story in an arrangement by Jack Gale. As they played, shoppers moving throughout the crowded store paused to listen and applaud. The sound of the viola quartet was sumptuous, liquid and multi-layered like a first-class Chianti lingering on the tongue. The Bernstein selections – “Maria,” “Tonight,” “I Like It Here in America” – were delightful, and the players obviously knew the words as well as the notes and delighted in the Stravinskian rhythms. So did the shoppers.

Afterwards violist Douglas and one of his colleagues walked off to Berlin’s Phiilharmonie to play a Brahms sonata for viola and piano in a masterclass. “Who was the pianist?” I heedlessy asked, and Douglas replied, “No one – the Berlin Philharmonic violist sang the piano part.” One thing about musicians – the good ones are always invested in what they are doing and in what it means; that is the factor that underlies everything they do.