BERLIN – 135 people including 118 splendid musicians of the Boston Youth Philharmonic Orchestra, nearly all of them aged 12-21, have safely travelled from Logan Airport to Berlin, bringing 16 cellos in the baggage compartment in heavy cases. It only took six airplanes, at least three busses, numerous taxis, private vehicles, and subway cars to assemble everybody and get them here. There were only minor travel incidents – a contrabassoon was briefly misplaced, a passport temporarily vanished, one flight via Munich was delayed, risking a missed connection, some musicians made a wrong turn in the Munich airport and had to go through security again. 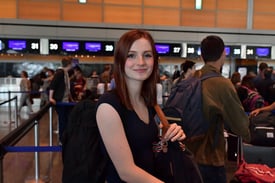 Now there are eight challenging concerts to play in eight prestigious halls in eight cities and a lot more travel by bus, train and plane. There will be meetings with musicians in the resident orchestras in many of the cities, chamber-music performances, sightseeing tours, and a dinner on a boat in Prague, and of course countless individual and unpredictable adventures, events, encounters, and explorations of possibility.
The soul of the enterprise lies in the final work composer Gustav Mahler completed, his Ninth Symphony. Mahler worked on this massive work between 1908 and 1910, but the premiere did not occur until 1913 which was after his death. Even though more than a century of performance has passed, the symphony remains immensely difficult for conductors and orchestras alike, and it is not a piece most youth orchestras would dare to attempt. But it is a central work in the repertory of the BPYO’s founding music director Benjamin Zander. He first led it in Boston forty years ago and he estimates he’s since conducted on about 25 occasions; the BPYO played it in Symphony Hall to tumultuous ovations last March. 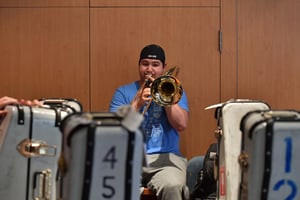 Since then, the BPYO has rehearsed and performed another concert program and devoted an ambitious post season schedule to refining the symphony before the tour – five four-hour Saturday afternoon rehearsals in Boston’s Benjamin Franklin Institute as well as an additional Friday-night rehearsal. The Mahler appears on all of the tour concerts, sometimes as a stand-alone event, sometimes supplemented by a couple of other works that Zander has gathered into a program reflecting the origins and world-altering circumstances of World War I, Ravel’s apocalyptic La Valse and George Butterworth’s setting of two British folksongs, The Banks of Greenwillow. Butterworth was a composer of promise who died at the age of 23 in the Battle of the Somme in France.

There will be ample opportunity to reflect on these works and the forthcoming further rehearsals and performances as they occur, not to mention on the thoughts and experiences of the young musicians as they develop. But for now, a bit of travelogue.

Your blogger was in the largest group which flew on Lufthansa flights the first of which was on a very crowded and uncomfortable plane. My own seat backed on a wall, so it didn’t recline; the television screen was in Chinese and wouldn’t change without professional attention; for most of the flight the earphones delivered sound to only one ear. The flight crew tried to be helpful but had their work cut out for them; the dinner, chicken or pasta, was not edible, and if I had accidentally created the glutinous breakfast muffin, I would have been careful to avoid doing it again.

There was an elaborate entertainment menu – a choice among more than 60 movies as well as a selection of television shows and a lot of music. My own mistaken choice was Three Billboards Outside of Ebbing, Missouri, a much-awarded movie a year ago. The performers deserved their accolades; the movie does not – it struck me as dishonest, condescending, unconvincing and incoherent. Not to say pretentious. A scene in which the stonily enraged Frances McDormand is hurling Molotov cocktails at a police station, destroying it and disfiguring Sam Rockwell, is accompanied by lush-throated Renee Fleming on the soundtrack, singing, of all things, “The Last Rose of Summer.” Talk about irony.
Another bit of irony came in a documentary about the 43-years of collaboration between filmmaker Steven Spielberg and composer John Williams which was a promotion for an album of hitherto unrecorded (!) music by Williams, including a celebratory movement from his suite American Journey called “Immigration and Building” that was commissioned by the Clinton administration for a multimedia presentation created by Spielberg. It’s a stirring piece that one does not imagine has been performed very often during the current political climate. 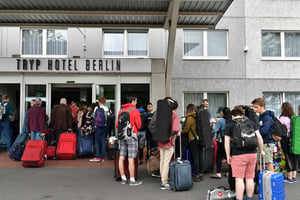 Once we arrived in Berlin, the group travelled to its quiet hotel in the former East Berlin and assembled almost immediately for a rehearsal in one of the dining rooms that apparently doubles as a ballroom – there are mirror balls suspended from the ceiling. Although the space was crowded, the players were distant from the each other and it was hard for them to hear, so normal rehearsal was impossible, not that Zander is that interested in “normal” rehearsals. In addition the string bass players were having their awkward first meeting with their rental instruments, and it wasn’t going well. “Do you like your new instruments?” Zander asked to a cry of “no.” 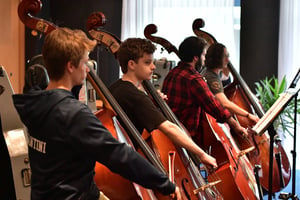 But cries of “no” are not Zander’s style and he is seldom at a loss. He likes to respond to crisis by exclaiming “Isn’t it fascinating?” and in fact he found some fascinating things to do. At one point he instructed the players to close their music folders and put them on the floor and play the opening pages of the Mahler Ninth from memory – and they did, with astonishing security and considerable interpretive effect. Later he asked everyone to move from their traditional positions and sit or stand next to someone who played a different instrument. This changed the sound of the music because of the way it changed the way the players heard it.
And Zander did admit his reason for the rehearsal – “I want to keep all of you awake,” he said. It is his belief that the way to avoid jet lag is to keep going after a transatlantic flight until you drop. After a brief break so that the hotel could set up a dinner break, the group assembled for a decent meal – turkey with mushrooms over rice, vegetable and cheese-stuffed zucchini, green beans and carrots, assorted other vegetables and salads, rolls, and desserts – bananas in fruit compote as well as tapioca and yogurt and even a surprise or two like pickled watermelon rind. And then it was time to stumble to the elevators and ride upstairs and tumble into bed. 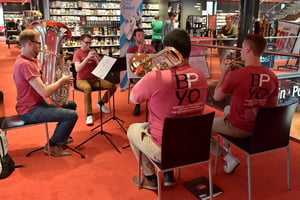 STAY TUNED FOR MORE STORIES FROM THE 2018 BPYO EUROPEAN TOUR and check out our account on smug mug where you can purchase prints from our European adventure!